Autobytel 2012 Luxury Car of the Year

The Autobytel 2012 Luxury Car of the Year is a category that really highlights the efforts made in the world of luxury driving. With one luxury sedan representing the classic world of British design, another represents a Korean jumpstart and the winner is new introduction to the luxury world and is quickly headed to becoming a classic from Germany.

Read on to learn about the three finalists for Autobytel 2012 Luxury Car of the Year.

Autobytel Luxury Car of the Year Winner: 2012 Audi A7

Autobytel Luxury Car of the Year Winner: 2012 Audi A7

Audi took the four-door luxury coupe segment to new heights this year with the 2012 Audi A7, and with a remarkable mix of styling, luxury, performance and technology, this sleek four-seater was chosen as the Autobytel 2012 Luxury Car of the Year. The A7 has arguably one of the best exterior designs of any luxury car which is accented by its sleek roofline and signature LED-trimmed headlights. Inside, the A7 has a luxurious cabin equipped with a surprising amount of technology including a Wi-Fi hotspot and a pop-up navigation system that incorporates Google Earth into the maps. For now, performance is limited to a 310-horsepower V-6, but an all-new S7 will be available soon with a twin-turbocharged V-8 pumping out 420 horsepower.

Just a few years ago, the idea of a Hyundai sedan competing as a luxury car wouldn't have been feasible, but the Hyundai Equus brings the brand into a higher class of competition which is why it is a finalist for the Autobytel 2012  Luxury Car of the Year. The 2012 Hyundai Equus gives Hyundai a vehicle to go up against some of the most proven full-size luxury sedans on the market, while continuing to provide the same level of value and reliability expected from the brand. Even with its pricing at just under $60,000 making it the most expensive Hyundai ever, it still delivers sufficient value compared to other sedans in this class. Aside from its potent pairing of V-8 engine options, the Equus also delivers a plush, roomy interior including a rear seat that can be equipped with individual bucket seats and a reclining right seat with a foot rest.

After keeping its designs pretty much the same over the last five decades, Jaguar pulled the trigger on a quick design change on its popular XF after just three years on the market and came in as a finalist for teh AUtobytel 2012 Luxury Car of the Year. The most noticeable change on the 2012 Jaguar XF is the new headlights which fall more in line with those of the 2007 Jaguar C-XF Concept and the Jaguar XJ. Instead of the scalloped headlights that debuted on the XF in 2009, the new 2012 shows more attitude with narrower lights that no longer have an eyebrow shape carried over from historic Jaguar designs such as the previous XJ and the defunct S-Type and X-Type.

Let Autobytel Hear from You

Let Autobytel Hear from You

The editorial staff of Autobytel has chosen the previous three luxury sedans as the best of what we have seen for 2012, and while there are many others in this class that probably deserve some kudos as well, we'd love to hear which one of the previous three you would choose for yourself. 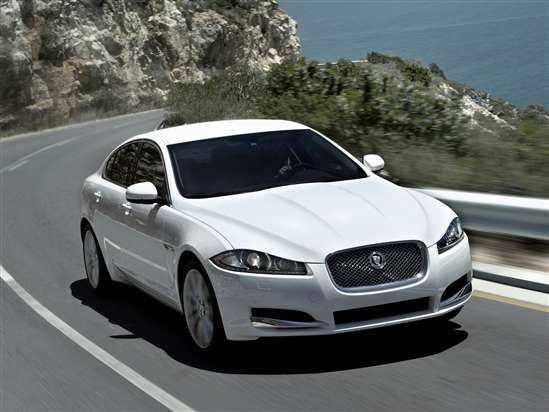 Autobytel 2012 Luxury Car of the Year