A convertible is about fun — the pleasure of connecting more with the world around you and the road below you, rather than being all sealed up in a cocoon. And nobody does fun like the 2019 Mazda MX-5 Miata. This little two-seat roadster is purpose-built to put a smile on your face, and it does so splendidly — and without breaking the bank. No other convertible got this much interest from consumers seeking price quotes via AutoWeb, which makes it the winner of our AutoWeb Buyer’s Choice Best Convertible Award. Here are 10 reasons folks are checking out this little Mazda.

For most of its life, the MX-5 Miata has been a cute little convertible with gently rounded curves. But the Miata has always been an award-winning sports car, renowned for its rear-wheel drive architecture and eager handling.

More than ever, today’s Miata looks the part of the sports car that it is. Its headlights wear an aggressive squint rather than the easygoing openness that characterized earlier generations. The body has some more curves along the side, and the taillights evoke a Jaguar F-TYPE. The MX-5 Miata’s tiny size still makes it endearing, but it has become more of a terrier than a poodle.

One of the great things about a small, lightweight sports car is that it handles well. Another great thing is that it doesn’t need to burn much fuel.

The MX-5 Miata is a prime example. Its EPA ratings read more like an economy car than a performance legend: 26 miles per gallon in the city, 35 mpg on the highway, and 30 mpg overall with its optional six-speed automatic transmission, and very slightly less with its standard six-speed manual. Even when you’re flogging it hard, this Mazda keeps your fuel bills low.

8) The cabin is stylish, well-finished, and more comfortable than ever.

8) The cabin is stylish, well-finished, and more comfortable than ever.

Until the current generation, the MX-5 Miata’s interior had languished for years at 1990 standards for style and build quality. But since the current Miata debuted as a 2016 model, the car has offered a more elegant cabin. There’s a low dashboard with an infotainment screen perched on top, creating a premium-grade minimalist vibe. New this year, a rearview camera is standard equipment.

The cabin is cozy but comfortable for all but the tallest and widest drivers. You sit barely above the pavement level, but the seat holds you nicely in place. The passenger has a little less space, and of course there’s no rear seat, but overall the Miata is quite comfortable for a little roadster. A newly available telescoping steering column also makes it easier to find a comfortable driving position.

The MX-5 Miata is available both as a traditional convertible with a manually operated cloth top or, on the MX-5 Miata RF, as a hardtop with a partially power-retractable roof. The soft top can be opened or closed in literally a few seconds and with just one hand, and the power-operated hardtop doesn’t take much longer. In an impressive engineering feat, neither the soft top nor the hard top eats into trunk space when you put it down.

Besides giving the security and quietness of a hard top versus a fabric one, the Miata RF also brings the rare aesthetic of a Porsche Targa to the affordable convertible segment. There are few new cars that look much like the soft-top Miata — and none that look like the RF.

6) The manual transmission is a joy to use.

6) The manual transmission is a joy to use.

The MX-5 Miata is available with a smooth-shifting, responsive six-speed automatic transmission. But in an era where nearly everyone prefers an automatic, Mazda reports that 60 percent of Miata buyers still shift their own gears.

A manual transmission is a perfect complement to a little roadster, and the MX-5 Miata has one of the best. It has short, precise throws and a forgiving clutch that make it easy to drive either spiritedly or gently. Few manuals are left on the market, and some of those are so bad that they feel like a conspiracy to drive away the buyers that remain. By contrast, the Miata’s manual further involves the driver in a delightfully engrossing driving experience.

The Miata always has been a small, light car rather than a brutally powerful one. The current generation already was quick when it debuted with 155 hp — not a particularly impressive specification, but still healthy in a car that weighs less than 2,400 pounds.

For 2019, Mazda has bumped horsepower up to 181, a 17 percent boost. That’s not going to change the minds of buyers who lust after a 797-hp Dodge Challenger, but it’s a splendid bonus for those who like their sports cars delicate rather than brutal. The revised engine also has a higher redline than before, furthering the car’s zippy feel.

4) The handling is as sharp as ever.

4) The handling is as sharp as ever.

The main attraction to the MX-5 Miata always has been its handling. It’s a rare gem in a world of big, heavy, front-wheel drive cars and crossovers: a low, lithe, light, rear-wheel drive roadster. Superb handling balance, a low center of gravity, and beautifully crisp steering responses maximize driving pleasure. This car goes where it’s pointed with a delectable mix of eagerness and precision.

Many of today’s sports cars are powerful and high-tech, but while they achieve phenomenal performance specifications on paper, they keep the driver at a distance. The MX-5 Miata’s handling is the opposite — it makes some slight sacrifices on the spec sheet to keep a smile on your face. At the same time, it’s capable enough on the track that no autocross event would be complete without a complement of Miatas.

A brilliantly agile roadster with crisp steering and a well-finished interior — that’s how you could describe a Porsche 718 Boxster. But it’s also how you could describe a Mazda MX-5 Miata. The difference is that the Mazda costs less than half as much. Prices start at just $25,730, and even the priciest model (the RF Grand Touring) stays below $35,000. That makes the Miata one of the least expensive new convertibles you can buy today.

An affordable price is an asset to any car, but it’s especially valuable for a two-seat convertible. It’s tough to afford a Porsche as a weekend-only car, but much easier to set aside enough cash for a Miata plus a small sedan or crossover. A sterling reputation for reliability also boosts the Miata’s value advantage compared to certain temperamental European luxury marques.

There aren’t many convertibles left on the market, and even fewer that are much like the MX-5 Miata. It’s both delightful to drive and easy to afford. Many convertibles are neither, and very few are both. The closest are the Mini Cooper, which is front-wheel drive and (unless you pay a lot more) less powerful than the Miata; and the Fiat 124 Spider, which is a less powerful Miata with different styling but the same platform and interior.

There’s also the sporty, fun-focused, rear-wheel drive Toyota 86 and Subaru BRZ, but they’re sold only with fixed roofs, without the Miata’s open-top driving pleasure. This isn’t one of the market classes where you have a lot of similar great options from which to choose. The MX-5 Miata is nearly your only option — and fortunately, it’s also great.

We’ve alluded to this throughout our 10 reasons, but that’s because it underscores what the 2019 Mazda MX-5 Miata is all about: joy. Everything about the Miata is designed to delight. The engine is eager to zip you forward merrily, without immediately getting you into trouble with the law. The steering responds instantly when you want to change direction, and the capable suspension ensures you go where you are pointed. Your low seating position keeps you intimate with the road, and your open top keeps you intimate with the sky.

When a car this good is cheap enough to be accessible to the masses, rather than just the ultra-rich, is it any surprise that AutoWeb’s users took notice? 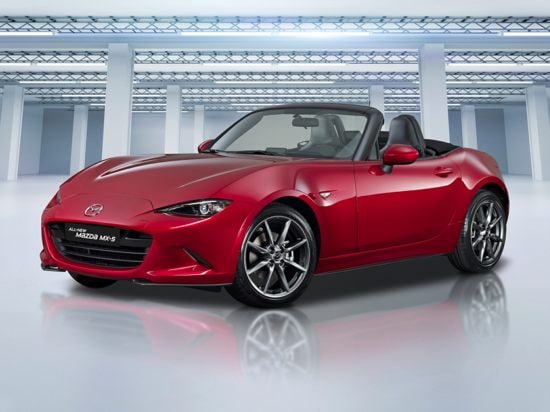