The Honda Civic boasts nearly five decades of U.S. sales, and it’s long been known as a small car that offers more than just the basics of transportation. Honda reemphasized that point when it gave the car a comprehensive redesign for 2016, breaking new ground for the Civic’s performance and style. The 2019 model year brought even more improvements to a diverse and compelling lineup, and prices start at an easily affordable $19,450.

In a class that also includes such stalwarts as the Toyota Corolla, Hyundai Elantra, and Volkswagen Jetta, shoppers using AutoWeb gravitated toward the Civic. Their preference means the 2019 Honda Civic wins the AutoWeb Buyer's Choice Best Compact Car Award. Here are 10 things buyers are loving about today’s iteration of this longtime favorite.

Many compact cars are sold only as four-door sedans. While that’s still the best-selling member of the 2019 Civic lineup, Honda also has two other options. One is a five-door hatchback, which combines tons of cargo space with a smaller, easier to park footprint. The other is a two-door coupe, the only such car left that’s available for less than $25,000 — every other coupe on the market (not counting three-door hatchbacks) is bigger, more expensive, or both.

Whether you’re interested in the sporty coupe, the useful hatchback, or the classic sedan, you won’t find a dull Civic. The 2016 redesign was the model’s most dramatic overhaul in a decade, casting out gently rounded shapes for aggressive bulges, creases, and angles. The sedan’s silhouette is long and low, looking more substantial than a generic compact car, while the shorter coupe and hatchback are endearingly stubby. Around back, all models share distinctive crescent-shaped taillights, and on the coupe they even connect via a lightbar.

The Civic’s styling hasn’t won universal acclaim, but no one could ever accuse it of being boring or derivative. At the same time, don’t worry that you’ll get unwanted attention — lots of your fellow motorists already are driving Civics.

8) The Si and Type R versions offer the performance of a sports car.

8) The Si and Type R versions offer the performance of a sports car.

Sitting atop the Civic lineup is a pair of souped-up performance cars that take the Civic’s bones to a whole new level. This starts with the Si, which has been part of the Civic lineup for most of the last 30 years. Currently available as a coupe or sedan, both priced at $24,300, the 2019 Civic Si features a 205-hp turbocharged four-cylinder engine and a slick-shifting six-speed manual transmission, along with tighter steering and handling than the standard Civic.

But the real thrills are in the $35,700 Civic Type R hatchback. It cranks up horsepower to an insane 306, and further upgrades the suspension, steering, and tires to deliver a performance bargain. It may sound odd to consider a $36,000 Honda Civic a bargain, but buyers know the challenge of finding cars that drive like this at any price.

7) Even ordinary Civics are fun to drive.

7) Even ordinary Civics are fun to drive.

No matter which Civic you buy, you’re going to get a car that was crafted for people who like driving. Even the base-model LX delivers a stellar balance of ride and handling, with tight, responsive steering that’s eager on back roads without requiring excessive effort in parking lots.

The standard 2.0-liter four-cylinder engine with 158 hp is suitably peppy, and the 1.5-liter turbo — standard on mid- and upper-level coupes and sedans, along with all hatchback models but the Type R — makes an even livelier 174 to 180 hp. If you want to get closer to the Si and Type R, several Civic trims are available with a six-speed manual transmission, including the 180-hp Sport hatchback.

6) It gets up to 36 miles per gallon in mixed driving and 42 mpg on the highway.

6) It gets up to 36 miles per gallon in mixed driving and 42 mpg on the highway.

The fuel economy standout of the Civic line is the 1.5-liter turbo with a continuously variable automatic transmission, or CVT. It’s rated for up to 32 mpg in the city, 42 mpg on the highway, and 36 mpg overall — one of the best showings among all gas-only cars sold in the U.S., despite its powerful acceleration. Most Civics hit at least 32 mpg in mixed driving, even the sporty Si. And the Type R’s 25 mpg rating, while not exactly thrifty, is respectable for a 306-hp performance machine.

At the opposite end of the spectrum, the Civic no longer offers a hybrid model, but the 2019 Honda Insight is heavily based on the Civic sedan and achieves up to 52 mpg in mixed driving.

5) The upgraded infotainment system is easier to use.

5) The upgraded infotainment system is easier to use.

The 2016 Civic was among the first cars on the market with Android Auto and Apple CarPlay, systems that let you use some of your phone’s functions — including GPS navigation — through your car’s touchscreen. But the car faced criticisms about its user-friendliness, with touch-sensitive controls replacing hard buttons and knobs.

For 2019, Honda has improved the control layout, adding hard buttons to the left side of the touchscreen. There’s also a welcome knob to adjust the audio volume and turn the sound system on and off. Most Civic trims remain compatible with the HondaLink mobile app, which lets you lock, unlock, or start your Civic remotely using your phone.

All Civic versions — the sedan, coupe, and hatchback — earned top marks in crash tests conducted by the Insurance Institute for Highway Safety and the National Highway Traffic Safety Administration. That means scores of Good from the IIHS and five-star overall ratings from NHTSA.

Not only will the Civic perform well in a crash, but it also comes standard with a suite of crash-avoidance technology. Previously optional on most Civics, the “Honda Sensing” suite is included at no charge even on the base model for 2019. It brings adaptive cruise control, a forward collision warning with automatic emergency braking, and lane- and road-departure warnings with automatic steering corrections. Only the Si and Type R skip the driver aids, leaving their performance-minded buyers to do their own steering and braking.

3) You get plenty of features for your money.

3) You get plenty of features for your money.

The aforementioned safety gear helps make the 2019 Civic a respectable bargain at its base price of $19,450 for the sedan, $20,650 for the coupe, and $21,450 for the five-door hatchback. You can pay even less for some competitors, but buyers are still getting plenty of features for their money with the Civic.

What’s more, the Civic has excellent projected resale values, so likely it will be worth more than most small cars when you’re ready to replace it.

Every Civic provides outstanding interior volume for a small car. The sedan and hatchback can hold four adults comfortably, with above-average rear legroom. A relatively wide cushion and a small central hump also make it easier to fit a fifth passenger. Even the coupe has three rear seating positions and acceptable legroom, though its head space is tight.

Cargo isn’t overlooked, either. Here’s where the hatchback shines in particular, with up to 26 cubic feet of luggage volume behind the rear seat and 46 cubic feet with the rear seat folded down. But the sedan also offers above-average volume for a small car at 15 cubic feet, and even the coupe is decently useful with 12 cubic feet. Overall, the sedan and hatchback bring the interior volume of a larger vehicle to the compact class, while the coupe avoids making too great of a sacrifice to style.

1) It’s much more than just an economy car.

1) It’s much more than just an economy car.

Refined, safe, roomy, and fun to drive, the Civic stands out as a compact car because it’s much more than just a compact car. Beyond the traditional merits of a low price and good gas mileage, it delivers a complete package of virtues that can win buyers who might have been considering a more expensive mid-size car or some other type of sporty vehicle.

An uncommonly wide range of powertrains and body styles — at a wide variety of prices — also helps ensure there’s a Civic for everyone. The AutoWeb community certainly thinks so. 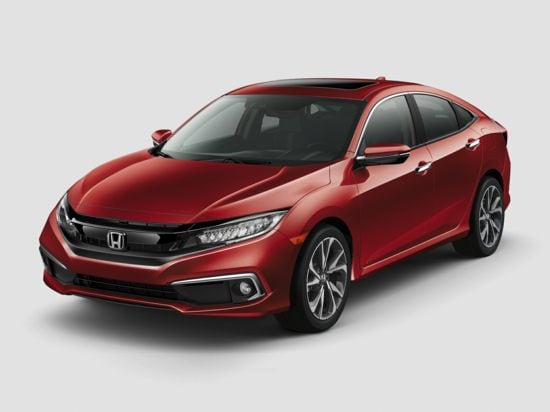