A wild, but practical, child

Introduction
By Alan Rider
Mazda MazdaSpeed 3: First Drive — Wild child. That's how Mazda engineers describe the newest member of the MazdaSpeed family. Obvious hyperbole aside, pinning a label like this on the 2007 Mazda MazdaSpeed 3 is a little misleading. Of course this high-performance version of the automaker's popular compact hatchback has a wild side — stuffing a ridiculously powerful turbocharged motor into a lightweight body will do that. But to our way of thinking, the fact that this new model is one of the world's quickest front-wheel drive cars is only part of its appeal: it's also practical for everyday life.

That's right: After spending the day driving the MazdaSpeed 3 on street and racetrack, what really makes this car so attractive is the way it combines giggle-inducing performance with everyday practicality. Add a window sticker in the mid-20s, and we predict a lot of folks are going to get a little wild child themselves over the zoom-zoom folks' latest offering.

Model Mix You get to choose between two trims when picking your hot new 2007 Mazda MazdaSpeed 3.

The Mazda MazdaSpeed 3 comes only as a four-door hatchback, but there are two trim levels to choose from. The base Sport and top-of-the-line Grand Touring versions of this hot hatchback get the same basic appearance and performance upgrades, including more stylish sheetmetal, a 2.3-liter turbocharged engine and six-speed manual transmission, sport-tuned suspension, bigger brakes, and 18-inch alloy rims.

Prices for the Sport model start at $22, 835 including $595 destination, making it competitive with other high-performance compacts such as the Chevrolet Cobalt SS Supercharged, the Honda Civic Si or the Volkswagen GTI. For that money you also get a long list of desirable standard features including front sport seats, cloth upholstery, automatic climate control, keyless entry, cruise control, AM/FM/CD stereo with six speakers and aux audio input jack, as well as a special MazdaSpeed interior trim. Also standard are whiplash-reducing active head restraints, side-impact airbags for front seat occupants and side-curtain airbags for front and back. Four-wheel-ABS, Electronic Brakeforce Distribution (EBD) with brake assist and Dynamic Stability Control (DSC) are also standard.

Step up to the Grand Touring model and you get a nicely-equipped car for a sticker price of $24,550, including $595 destination. All the good stuff is here, including bright xenon headlights and LED taillights, rain-sensing windshield wipers, cloth sport seats with leather side bolsters, a trip computer, antitheft alarm, and a premium 222-watt Bose audio system with a six-disc in-dash CD changer and seven speakers. If you're feeling flush, you can add a GPS navigation system ($1,750), an auto-dimming rearview mirror with compass and universal garage door opener ($250), and Sirius satellite radio ($430). Toss in a few other assorted doo-dads and a fully loaded GT model will set you back just over $27,000.

Interested? Better hurry. Mazda says only 5,000 Mazda MazdaSpeed 3s will be available this year. Many are already spoken for, which means you best act fast if you want to park one in your garage.

While the standard-issue Mazda3 is a zippy little performer, the MazdaSpeed version takes things to a whole 'nother level. MazdaSpeed engineers started the 3's transformation from mild to wild by reinforcing the car's unibody construction in several key areas including the center tunnel and front and rear suspension mounts. Curb weight jumps a couple hundred pounds over the mass market version but, with an engine like the one under the MazdaSpeed 3's hood, you'll be hard-pressed to notice.

About that engine: It's essentially the same turbocharged 2.3-liter inline four-cylinder motor we liked in the midsize MazdaSpeed6. The numbers alone — 263 horsepower and a whopping 280-lb.-ft. of torque — are impressive enough to make otherwise worthy competitors like the new Honda Civic Si, Volkswagen GTI, and Subaru WRX TR look like 98-pound weaklings by comparison.

Much of the credit for this prodigious power output goes to the motor's direct-injection design. As with the MazdaSpeed6, the 3's injection system sends fuel directly into the cylinder at very high pressure, creating a cooler, denser air/fuel mixture that results in increased torque, quicker turbo response, and lower emissions. Fuel economy is surprisingly decent too, though you will need to feed it a steady diet of pricey premium (91 octane) fuel, and put a block under the accelerator.

All that power is routed to the front wheels by a new six-speed manual gearbox. There's no automatic available, a “posers need not apply” move that may earn Mazda some street cred among the hard-core “tuner” crowd. If you're thinking that putting that kind of horsepower in a front-wheel drive car sounds like a recipe for torque steer under hard acceleration, you're right. Mazda engineers have gone to great lengths to minimize this, however, with a sophisticated collection of hardware and software including equal-length half-shafts, a limited-slip differential and a computer that both modulates throttle inputs and bleeds off turbo boost in first and second gear. MazdaSpeed engineers also beefed up the braking system with larger four-wheel discs (12.6-inches up front and 11-inches out back) and a bigger master cylinder to help make sure the car stops as good as it goes. Those brakes hide behind 215/45R18 tires and 18-inch wheels, which are controlled by the 3's rack-and-pinion steering setup. Mods to the front MacPherson struts and independent Multi-link back include firmer springs and shocks and larger diameter front and rear sway bars.

Design Stylish new sheetmetal give the MazdaSpeed 3 a more trendy look than the standard model.

When it comes to automotive design, cars that are the visual equivalent of screaming “HEY LOOK AT ME! AREN'T I COOL?” are anything but in our book. Thankfully, the designers resisted the temptation to go there in the process of giving the Mazda3 its makeover. Instead, the changes to the MazdaSpeed 3 are subtle enough that they merely enhance the base car's already appealing design . A deeper front air dam, wider front fenders, side sill extensions, a larger rear spoiler, and chrome exhaust tip are the most noticeable additions. The MazdaSpeed 3 will be offered in just four colors: Red, silver, black, and, a bright “cosmic” blue. Sharp 18-inch 10-spoke alloy wheels shod with Bridgestone Potenza 215/45/R18 summer tires are the perfect finishing touch. Unfortunately, we're certain it's only a matter of time before someone mucks up this low-key package by slapping on a set of 22-inch chrome spinners.

Inside the changes are just as understated and just as appealing. Front sport seats with substantial side bolsters provide excellent comfort and support during enthusiastic driving. Other nifty details include drilled aluminum pedals, distinctive red stitching on the seats and leather-wrapped steering wheel, and embroidered MazdaSpeed logos on front seatbacks.

The end result is a car that's distinctive enough to warrant a second glance by the car-savvy, without being so comically over-the-top that it'll attract unwanted attention.

Driving Impressions They say it gets to 60 in less than 60…and we believe 'em.

Wait 'til you drive this puppy.

The first thing you notice when you turn the key is the car's throaty exhaust note. While the raspy sound emitted by some tuner-mobiles can quickly become tiresome, the MazdaSpeed 3 has a mellower tone that adds to the car's high-performance feel without crossing the line into the realm of obnoxious. As you start rolling you're liable to be struck by how docile and well behaved the car seems. Even with this much power on tap, the MazdaSpeed 3 happily cruises along through heavy traffic with a minimum of fuss. Find a stretch of open road, however, and this gutsy little motor is eager to show you what it's got. Acceleration is impressive, making the manufacturer's claimed sub-six second 0 to 60 times easy to believe. For some highly juvenile fun, rev it up, dump the clutch, and you'll be rewarded with tire-smoking burnouts that'll make the 16-year-old in you grin from ear to ear. Keep your right foot planted and you'll quickly find yourself doing speeds that are likely to get you arrested. Mazda tells us the car is electronically limited to 155 miles-per-hour and, based on our time behind the wheel, we can tell you that number isn't as far-fetched as it might sound.

Unlike some small turbocharged engines, this 2.3-liter unit has surprisingly good grunt at low engine speeds and no noticeable turbo lag. We can also tell you the steps engineers have taken to minimize torque steer—the bothersome tugging you feel through the steering wheel under hard acceleration — have been remarkably successful. The six-speed manual gearbox compliments this engine very nicely, with short throws and gear ratios that allow you to take advantage of the motor's abundant torque. The hydraulic clutch has a bit of an abrupt on-off feel to it, but requires only a light touch.

Stopping the car is a no-nonsense affair even from supra legal speeds. We found those larger brakes combined with the standard Dynamic Stability Control (DSC) gave us an extra feeling of security when we set out to explore the car's handling limits.

The MazdaSpeed engineers' suspension mods have taken what was a nice little car with sporty overtones and turned it into an extremely competent handler that feels stable and predictable even when pushed hard. With these stiffer underpinnings the ride quality does suffer a bit, but it's far from objectionable. Considering the mindset of the folks who'll be buying a car like this, we think it's safe to say that they either won't notice or won't care.

The rack-and-pinion steering also adds to this feeling of confidence. The steering is precise and offers good feedback, though we'd prefer a little more weighty feel. The interior's ergonomics are little changed from the mainstream Mazda3, which is a good thing as far as we're concerned. The new front sport seats make a good thing better with excellent comfort for casual motoring and substantial side bolsters that are just the ticket for enthusiastic driving.

Rear 60/40 split-folding rear seats add a touch of practicality not commonly found in machines capable of delivering this level of performance. Drop both seatbacks and the little wagonette has room for more than 43 cubic feet of cargo.

While flogging the MazdaSpeed 3 around the 11 turns of Laguna Seca raceway was great fun, we walked away from our time behind the wheel convinced that the car's high-performance potential is only a small part of its appeal. Being able to drive it that hard on the track all day and then stop to load up on super-sized commodities from your neighborhood warehouse store on the way home, well, now that's what we call wild.

FAQ The MazdaSpeed 3 spanks the competition with more power stuffed inside a practical body style.

How does the MazdaSpeed 3 stack up against the competition? What we're really talking about here is bang-for-the-buck, and the Mazda MazdaSpeed 3 offers up more horsepower than most of its competition at comparable prices. While enthusiasts are sure to have their favorites based on torque output and handling character, the MazdaSpeed 3 is a top competitor, a real must-drive.

Just how fast is this bad boy? Numbers like the company's claim that the MazdaSpeed 3 will do 0-60 in under six seconds and top out at 155 miles-per-hour can be hard to put in perspective. We did a little digging and found that that level of performance puts this humble little wagon in the same league as a Porsche Boxster. That fast enough for ya?

Will there be aftermarket parts available if I want to take it to the next level? MazdaSpeed has an aftermarket parts operation that included a variety of hardware including powertrain, exhaust, brake, suspension, and styling parts designed to kick things up a notch. Available at more than 200 MazdaSpeed dealers across the U.S., the parts are backed by a nationwide factory warranty when bolted on by your neighborhood Mazda dealer. 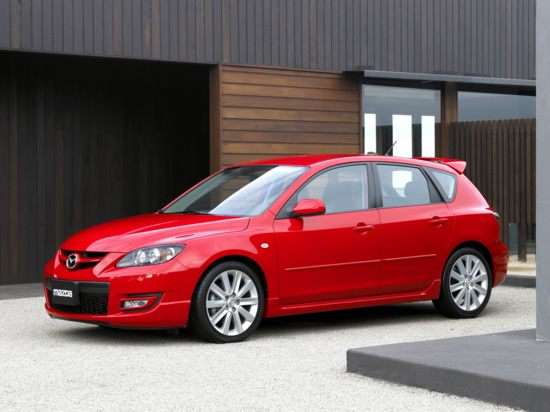