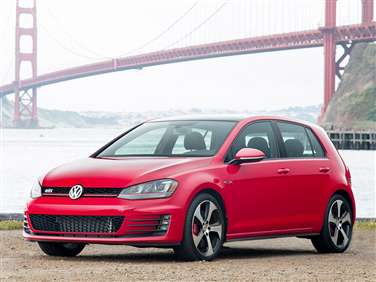 All About Volkswagen GTI

The Volkswagen GTI is a performance variant of the long-running Volkswagen Golf compact hatchback. The Golf was originally introduced in 1974, and the Golf GTI followed in 1976. The first Golf GTI reached the United States in 1980, a 90 horsepower sport version of the Volkswagen Rabbit. Since the first-generation Golf was called the Rabbit in the United States, the performance model was thus known as the Rabbit GTI. A GTI model has been available for all seven generations of the Golf, and in later years Volkswagen began to treat the GTI as a separate model, rather than simply a more upscale trim line of the Golf. The GTI, which gradually earned a reputation for being sporty, upbeat, and fun to drive, helped Volkswagen develop a following among sport compact car enthusiasts, and the GTI in particular became popular with people who enjoyed tuning and modifying sport compact cars for performance and aesthetic purposes. The Volkswagen GTI was quickly accepted as part of the “hot hatch” segment that exploded in the late 1970s and early 1980s, which meant that, in the United States, it competed primarily with small Japanese cars of that era, since hatchbacks did not yet enjoy the popularity in the United States that was common elsewhere around the world. Volkswagen capitalized on this success by creating marketing especially for the GTI, designed to attract buyers who needed a small, practical, relatively inexpensive car, but who also wanted to enjoy driving.

Like the other Volkswagen A-platform cars (the Golf, of course, as well as the Jetta sedan) the GTI was typically a front-mounted engine, front-wheel-drive car. Gas and diesel versions of the GTI have been available throughout its life, although Volkswagen tailors availability of these engines based on market, so not all engine options are available globally. Generally, the GTI has always looked quite similar to the Golf it was derived from, although the GTI got special treatment. Typically, a GTI gets sport front bucket seats rather than the Golf’s budget-friendly seating along with other interior upgrades, a sportier suspension, larger alloy wheels with sport tires, and a higher performance exhaust. Exterior cosmetic upgrades are also common. Early GTI models were often distinguished by better lighting, an occasional limited edition exterior color, and GTI badging. Later models often received exclusive body trim with more aggressive front and rear bumpers, and other options such as rear hatch spoilers or side skirts, as well as sportier interiors designed to cater to the driver. The GTI typically offered engines that were higher performance than the Golf (though, at times, high-end Golfs matched the GTI’s specs). Recognition of the GTI’s performance potential increased as it became a favorite of some motorsports teams. The GTI’s longevity has been marked by special anniversary editions of the car, as well as other special editions. Early GTIs are still sought after by collectors.