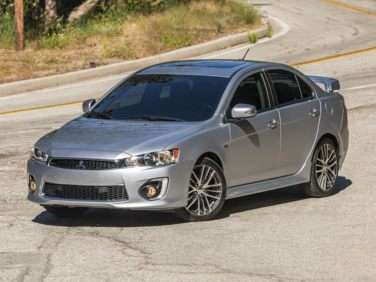 All About Mitsubishi Lancer

The Mitsubishi Lancer features a sporty, 4-door design that accommodates up to four passengers. Built around Mitsubishi's GS platform that is also used for the Mitsubishi Outlander, the vehicle's dimensions include a length of 180 inches, width of 69.3 inches and height of 58.7 inches. The 2nd-generation Lancer has also received bolder exterior upgrades that include a "shark-nose" front fascia. As of the 2009 model year, four trim levels are available – DE, ES, GTS and Ralliart. Each trim level features unique styling details.

Both the base DE and mid-level ES trim levels feature a 2.0-liter [DOHC]] 4-cylinder engine that delivers 152 horsepower and 146 lb-ft. of torque. In California and California-emissions states, engine output is downgraded to 143 horsepower and 143 lb-ft. of torque to accommodate stricter emissions regulations and qualify the Lancer as a Partial Zero Emissions Vehicle (PZEV). The GTS edition comes standard with an upgraded 2.4-liter 4-cylinder engine that provides 168 horsepower and 167 lb-ft. of torque. The DE, ES and GTS all come equipped with a 5-speed manual transmission with the option to upgrade to an automatic continuously variable transmission (CVT).

For the 2009 model year, the Lancer Ralliart features a 6-speed automatic transmission and 2.0-liter turbocharged 4-cylinder engine that musters 237 horsepower and 253 lb-ft. of torque. Other notable performance upgrades include all-wheel drive and mechanical limited-slip rear differential.

A high-performance version of the Lancer is available and known as the Mitsubishi Lancer Evolution. This sport-tuned edition features numerous performance enhancements and is available in two trim levels – GSR and MR. Both models feature all-wheel drive and a 2.0-liter turbocharged 4-cylinder engine that boasts 295 horsepower. The GSR comes equipped with a 5-speed manual transmission and the MR features a 6-speed automatic. The GSR also includes a performance-tuned suspension, high-performance brakes, front-limited slip differential, traction control and antiskid system. The MR builds on these features by adding rear limited-slip differential, leather/suede upholstery, keyless ignition and Xenon headlights.

There is a special performance edition of the 2009 Lancer available called the Lancer Evolution X. Based on the same basic platform as the Lancer, this vehicle is itself offered in two trims, the GSR and the MR. Both combine a rally-inspired all-wheel drive system with a turbocharged, 2.0 liter 4-cylinder engine that cranks out a neck-snapping 291 horsepower and 300 lb-ft of torque. The GSR shifts via a 5-speed manual, but the MR uses a 6-speed twin-clutch sequential unit similar to that found in the Ralliart. Fuel mileage for the MR is 17 miles per gallon in stop and go traffic and 22 miles per gallon during highway cruising, with the GSR seeing slightly lower mileage around town.