10 Things You Should Know About the 2010 Suzuki Kizashi

If you forgot Suzuki sold cars, here's a great reminder.

In football, it’s called a Hail Mary — a last-minute long bomb pass made in an attempt to win the game against all odds. There isn’t necessarily a lot of skill or forethought involved, but instead several yards as well as equal parts luck and divine intervention. In some eyes, Kizashi is Suzuki lingo for Hail Mary.

Back in Japan, Suzuki is a major player that sells the country’s best-selling car, and globally, the company has sold more than 40 million vehicles since the 1950s. But here in the U.S., relatively little attention has been paid to the maker of more than one underappreciated ride. With the launch of the 2010 Suzuki Kizashi comes the brand’s attempt to finally break free of anonymity, as it reintroduces itself to the buying public with surprising levels of style, quality, and even a fair bit of grin-inducing capability. Time will tell if the play works, but one thing’s for sure – Suzuki’s best-ever offense has taken the field.

#10. Yes, Virginia, Suzuki does still sell cars in the U.S. Even trucks and SUVs.

Though the company has been selling vehicles in the U.S. for years, there are still car shoppers out there who associate the Suzuki brand only with ATVs, motorcycles, and even marine engines. During our testing in Portland, Oregon, we encountered more than one person who was genuinely surprised to learn that Suzuki builds cars. We think part of that has to do with a lack of advertising/marketing and a poorly represented dealer network. It’s 2009…do you know where your Suzuki dealer is? If not, you can search on Suzuki’s website, which is where you’ll discover that the company offers not only the all-new 2010 Kizashi sedan, but also a range of vehicles designed to satisfy a variety of shoppers. These include the SX4 Crossover (voted our Best Kept Secret for 2007), the rugged Grand Vitara, and the three-row XL7 SUV.

#9. Premium style and craftsmanship. If Hyundai can do it, so can Suzuki.

Hyundai challenged assumptions by launching its Veracruz crossover and Genesis coupe and sedan models, each showcasing style and luxury not previously associated with this import brand. The 2010 Kizashi represents a similar move for Suzuki, as the company’s all-new sedan arrives with upscale materials and attention to detail not seen in vehicles like the SX4 and Grand Vitara. Inside every Kizashi you’ll find an abundance of soft-touch surfaces, quality fabrics, and overall refinement. Look deeper and you’ll discover an instrument panel covered with an upscale finish and housing controls that exhibit a hefty, substantial feel. If you’re expecting cheap bits and pieces inside the Kizashi, prepare to be surprised.

#8. The nicest Suzuki sedan ever. And the most expensive.

Prices for the 2010 Kizashi have yet to be released, but estimates put the base Kizashi S at about $19,000, whereas a fully-loaded Kizashi SLS is said to reach into the $29,000 range.

Nearly 30 large for a Suzuki sedan might be a hard pill for shoppers to swallow, but that does include all-wheel drive instead of the standard front-drive setup, triple-setting heated seats, rear parking sensors, leather upholstery, a 425-watt Rockford Fosgate sound system, and a navigation system. Not too shabby, but what really impresses are the features found on lesser trim levels, like a dual-zone climate control system, keyless ignition, and connections for iPods and Bluetooth devices. Given the popularity of personal portable musical devices, a multi-disc CD changer is not available on the Kizashi.

#7. The Kizashi offers more front head room than a Ford Fusion but less rear leg room than a Toyota Corolla.

Given its price, size, and content, the 2010 Suzuki Kizashi has a plethora of possible competitors, so we looked at several in an effort to put the car’s dimensions and capacities into perspective. At 13.3 cubic feet, the Kizashi’s trunk is larger than that of the Honda Civic but smaller than what you’ll find in a Subaru Legacy. The Kizashi delivers more front head room than a Ford Fusion, Volkswagen Jetta, and Toyota Corolla, but less rear head room than all three. In terms of leg room, you get equal or greater amounts in the Legacy, Fusion, Mazda6, Mitsubishi Lancer, and Corolla, but less in the Jetta.

#6. Consider the Kizashi to be a fun sedan, if not a full-fledged sport sedan.

Despite what forthcoming marketing might suggest, the 2010 Suzuki Kizashi is not a sport sedan. For that to be true, it would need not only its standard six-speed manual gearbox but also an improved continuously variable transmission (CVT) that doesn’t hamper off-the-line response. Or better yet, swap in a six-speed automatic. Toss in steering with quicker on-center response and additional road feel, and you have the backbone of a sport sedan. Until then, the Kizashi will serve up its share of fun with the six-cogger, paddles with the CVT that give the sporting impression of actual shifts, a taut suspension that makes the Kizashi firm but compliant on the streets and surprisingly flat in the corners, and well-bolstered seats that keep bodies planted when the road gets curvy.

#5. The Kizashi’s fuel economy ratings are competitive, though not class-leading.

Every 2010 Suzuki Kizashi will be built with a 2.4-liter four-cylinder engine that’s good for 185 horsepower when mated to the standard six-speed manual transmission, or 180 horsepower when paired with the CVT. By comparison, models such as the Subaru Legacy, Mazda6, and Ford Fusion enter the fray with 170-175 standard horses. Even with those few extra ponies under its hood, a front-wheel-drive Kizashi still records up to 31 mpg on the highway according to EPA estimates. That’s better than the Volkswagen Jetta (non-diesel) and Mazda6, but equal to the all-wheel-drive Legacy and less than the 34-mpg Ford Fusion.

A strong focus on safety has led automobile manufacturers to fit their vehicles with front-dual, front-side, and even side-curtain airbags in most of their cars, trucks and SUVs. Suzuki has gone one step further by adding two standard rear-side airbags, equipment that is often optional on luxury models.

Impressive, but most drivers hope to avoid using those airbags at all costs. To that end, the 2010 Suzuki Kizashi packs standard stability control, four-wheel antilock disc brakes with electronic brake force distribution, and the optional all-wheel-drive system with vehicle dynamic control.

#3. A V6 version of the Suzuki Kizashi is not available, but…

“The V6 Kizashi is purely an engineering test mule. We have no plans to build a V6 Kizashi at this time.” That’s what we were told about a six-cylinder model made available to us, shipped over from Japan the night before, which had been created to evaluate the Kizashi’s ability to handle more power. We looked for a sign of deception, a wink or crossed fingers, but came up empty. Bummer.

Fact is, the never-to-be-thought-of-again Kizashi mule we tossed around Portland International Raceway was quite a car, one ready to challenge a host of V6-powered competitors. Fitted with a smooth-shifting six-speed automatic gearbox and a version of the XL7’s 3.6-liter six-cylinder engine cranking out nearly 300 horses, this iteration of the Kizashi teased us with brisk acceleration and a hearty exhaust note. Unfortunately, it also highlighted how uninspiring the production Kizashi’s 185 horses felt in comparison.

Some would argue that the 2010 Kizashi is the best looking Suzuki to ever grace U.S. streets. We’d agree. But for shoppers who wish Suzuki’s newest sedan had a bit more ‘tude, a body kit is set to arrive with the 2011 model year. Enhancements will include more aggressive bumper covers, matching upper and lower grille inserts, side skirts, and a revised rear trunk spoiler. Unique alloy wheels will also be available.

#1. Nothing spells confidence like a long warranty, and the Kizashi has one.

No company wants to sell its products based solely on a long warranty, but offering one certainly doesn’t hurt when competition is tough and buying dollars are not easily relinquished. It’s an approach that has worked for Hyundai, is being put to the test at GM, and has long been a part of every Suzuki purchase. Spanning seven years or 100,000 miles, the Suzuki powertrain warranty isn’t the longest, but unlike most of its competitors, Suzuki’s coverage is fully transferable, a point that should bode well with subsequent owners. (GM’s warranty is transferable, but lasts only five years.) Owners also enjoy roadside assistance services covering the regular warranty period of three years or 36,000 miles. 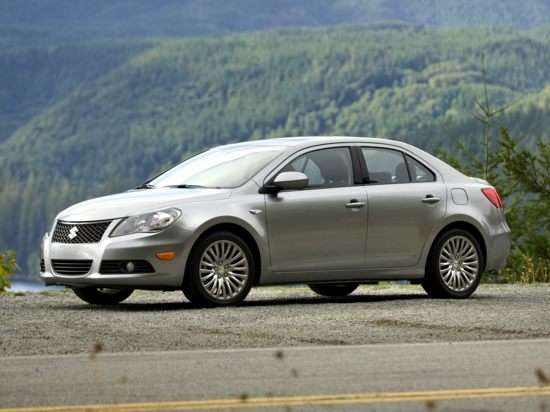