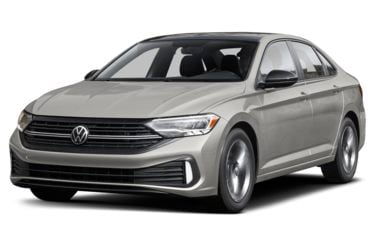 All About Volkswagen Jetta

The Volkswagen Jetta is a four-door, five passenger mid-size sedan, and the Jetta Sportwagen is a five-door, five passenger station wagon.The Volkswagen Jetta has long been a success story for the German auto manufacturer. Appearing since 1979, and initially known under a variety of different names, the Jetta was first marketed as VW’s slightly larger alternative to the Golf and Rabbit hatchbacks. Over the years, the Jetta evolved into a fully-featured mid-size car, and in 2005, the fifth generation of this venerable line bowed on North American shores. By this time, the Jetta had spawned several different performance editions and lent its name to other body configurations.

The 2009 Jetta is largely unchanged from the 2008 model year, but this is not a bad thing. On the outside, the latest generation of Jetta has adopted a sort of a polyglot design, with a distinctly Corolla-like front end garnished with chrome. This flows back along the familiar curved Jetta roofline into a very German trunk and rear quarters. The Jetta may have lost a small amount of the personality it displayed prior to 2005, but it has succeeded in separating itself further from its Audi cousins in terms of style.

A new body style is available for 2009, called the Jetta SportWagen. Interestingly, in the rest of the world this vehicle is marketed as a Golf or a Rabbit, since those two vehicles share almost identical platform features with the Jetta. The SportWagen is a 5-door station wagon in the tradition of previous Jetta wagons, and it bears the same front end as the sedan. The SportWagen also boasts a huge glass sunroof, which is over 4 feet in total length.

Unlike previous versions of the sedan and wagon, in the U.S. the Jetta is available with only a limited number of engine choices. Many of the previous performance trims have now been spun off into their own proper models. The power plant shared by the S, SE and SEL trims is a 2.5 liter 5-cylinder unit which produces 170 horsepower and 177 lb-ft of torque. A 6-speed manual or automatic transmission can be had, propelling the sedan to 60 miles per hour in 8.5 seconds. Volkswagen also plans to introduce their popular turbocharged direct-injection diesel motor as an option on both the SportWagen and the sedan late in the 2009 model year. This impressive engine is rated at 30 miles per gallon in the city and 41 on the highway in the Jetta TDI, but its release has been delayed due to difficulties with emissions standards in several states.

Both the wagon and the 4-door Jetta are well equipped in the base trim level, with power everything, air conditioning and remote entry. Stepping up through the different versions of the car allows buyers to choose from heated imitation leather seats, satellite radio, electronic stability control, larger wheels and with a host of other features. The well-appointed interior is the perfect place to enjoy the front-wheel drive Jetta’s excellent safety and road handling. There is no question that the 2009 Jetta sedan and SportWagen will take a respected place amongst their predecessors in family garages across North America.