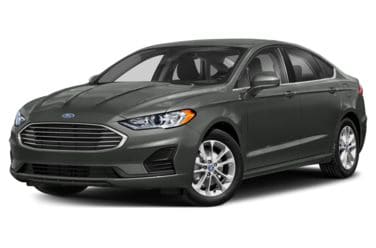 All About Ford Fusion

The 2008 Ford Fusion is an attractively priced option in the mid-sized segment. Starting at $18,135, there are only 3 different trim levels available, simplifying the buying process and allowing for better model differentiation. The entry level Fusion is powered by a 160 horsepower, 4-cylinder engine. This 2.3 liter motor is also available across all 3 trim levels. Upgrading from the S to the SE model adds power seats, a better stereo system and bigger 16-inch wheels. The range-topping SEL significantly improves interior materials, with leather, wood trim and heated mirrors and seats coming into the picture, as well as yet another step up in wheel size. Each 4-cylinder Fusion is available with either a 5-speed manual transmission or a 4-speed automatic.

The SE and SEL trims also add the option of a 3.0 liter Duratec V6 which generates 221 horsepower and 205 lb-ft of torque. The V6 is exclusively mated to a 6-speed automatic transmission, with no manual option. However, V6 buyers are treated with optional all-wheel drive, which is a significant advantage over either the Camry or the Accord. The all-wheel drive system in the Fusion is an excellent choice for those who have to regularly deal with snowy commutes.

While the Fusion is positioned as a mid-size vehicle, its actual dimensions closely resemble the Ford Taurus of the 1990’s. This increased size translates into an interior which is comfortable and reasonably spacious for all passengers. Trunk space is adequate, and the split rear seat folds forward in order to accommodate oversized items – as does the front passenger seat. The Microsoft / Ford SYNC system integrates cell phones and MP3 players into the vehicle’s entertainment system through Bluetooth technology, which helps on long road trips.***** For those looking to squeeze as many miles out of a full tank of fuel as possible, the 4-cylinder Fusion is definitely the way to go. At 20 miles per gallon city, and 29 on the highway, the numbers are impressive for a mid-size sedan. The V6 edition of the Fusion, when saddled with efficiency-robbing all-wheel drive and an automatic transmission, can only manage 17 miles per gallon around town and 25 highway miles per gallon. These numbers put it in comparable company to the V6-equipped competition, and the extra power found in the 3 liter engine definitely makes for a more engaging driving experience.

The 2008 Ford Fusion is a worthy competitor to the Japanese sedans which have long dominated this segment. While 2009 will see only incremental changes made to the vehicle, in 2010 Ford has announced that significant upgrades are in the cards, including a hybrid version.

The 2009 Ford Fusion is a carryover from 2008. The 2009 Fusion is available in five different trim levels: the S, SE, SEL, V6 SE and the V6 SEL. The first three versions of the sedan come with a 160 horsepower, 2.3 liter 4-cylinder engine that produces 156 lb-ft of torque. The S and SE are outfitted with a 5-speed manual transmission with the option of a 5-speed automatic, while the SEL is automatic-only. The 2.3 liter motor turns in fuel mileage of 20 miles per gallon in city driving and 29 miles per gallon on the highway when matched with the manual transmission. The V6 SE and V6 SEL are equipped with a 3.0 liter 6-cylinder engine that produces 221 horsepower and 205 lb-ft of torque. Mated to a 6-speed automatic, this motor provides fuel economy rated at 18 miles per gallon in the city and 26 miles per gallon on the highway. All-wheel drive is optional on either of these V6 trim levels.