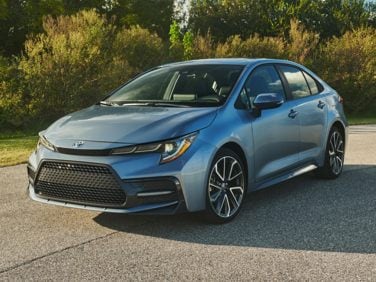 All About Toyota Corolla

The Toyota Corolla is a four-door, five-passenger compact sedan. The Toyota Corolla is one of the automotive industry’s great success stories. Introduced in 1966, the Corolla has long been one of the first choices for buyers around the world looking for reliable, basic transportation. While in the past it has been available as a hatchback and a 2-door coupe, the current generation of Corolla is exclusively available as a 4-door sedan, having ceded the hatchback role to the Toyota Yaris.

The Toyota Corolla can be had as any one of 5 different trim levels. While the primary demographic targeted by the front-wheel drive Corolla is the first-time car buyer looking for an inexpensive vehicle, the base model’s standard features fare better than many of the cost-cutting econo-hatches found just below the Corolla’s price point. Both air conditioning and an MP3-capable stereo system are found in the least pricey Corolla, and upgrading to LE trim for around $1200 more than the $14,405 purchase price provides power windows and door locks. This helps to humanize the functional but otherwise spartan interior of the vehicle. Big buttons and easy to read displays dominate the uncluttered dashboard and center console, and seats are trimmed with easy to clean cloth.

The standard engine in 4 of the 5 Corolla trims is a 1.8 liter 4 cylinder which makes an adequate, although uninspiring 132 horsepower. While the S version of the Corolla adds some sport interior and exterior accents, the 1.8 liter engine is not marketed as a sports-oriented power plant, and as such, rocket ship performance is not expected. If buyers have set their hearts on the Corolla but want a little bit more power, then the XRS model is definitely the way to go. A 158 horsepower, 2.4 liter engine replaces the entry-level motor under the hood, and the 162 lb-ft of torque make for much more exciting driving. The vehicle also has a more aggressively tuned suspension which can result in a less settled ride over rougher pavement when compared to the more conservatively sprung versions of the car. The availability of the XRS sport model is a nice touch, and although it does not distinguish itself in the annals of compact car performance, it certainly turns up the fun factor. The XRS is available with either a 5-speed manual, or a 5 speed automatic transmission, and the manual is highly recommended in order to get the most out of the 2.4 liter’s power band. Interestingly, the LE and XLE package come with an automatic transmission only, while base model and S buyers are able to choose between an auto and a manual gearbox.

Fuel economy for the Corolla is generally excellent, no matter which transmission or engine is chosen. The 1.8 liter motor returns 26 miles per gallon in city driving and 35 on the highway, and even the more powerful, heavier XRS still sees 30 highway miles per gallon and a decent 22 in stop and go conditions. When combining the affordable price with the decent features list, the Corolla is a solid option for those who need more space than a small hatchback can give them.