2012 Toyota Matrix S AWD Review: What Is It
By Christian Wardlaw

Defying both convention and clear definition, the 2012 Toyota Matrix is a five-door hatchback based on the Toyota Corolla, one offered with optional all-wheel drive and several practical features of crossover suvs. Styled and priced to appeal to young buyers, but lacking the technology they crave and offering Bluetooth only as part of a pricey option package on the most expensive models, the Toyota Matrix fights for attention in a segment where competitors either undercut it price, provide greater fuel economy, or supply more modern technology.

The 2012 Matrix lineup includes L and S trim levels, the latter equipped with a more powerful engine and available with an optional all-wheel-drive system. Prices for the Matrix L start at $18,845, while the Matrix S costs $19,565.

Safety features for all Matrix models include Toyota’s Star Safety System, comprised of a traction and stability control system, four-wheel-disc antilock brakes with electronic brake-force distribution and brake assist, and Smart Stop Technology that makes it impossible for the car to accelerate if the brake pedal is depressed. Six airbags are aboard to help the Matrix earn top scores in frontal- and side-impact crash tests conducted by the Insurance Institute for Highway Safety

2012 Toyota Matrix S AWD Review: What It’s Up Against

2012 Toyota Matrix S AWD Review: What It’s Up Against

Two models spring instantly to mind when thinking about what the 2012 Toyota Matrix S AWD competes against. Well, they spring instantly to my mind, anyway. The Subaru Impreza hatchback is aimed squarely at the same buyer that Toyota courts with the Matrix, and the Suzuki SX4 in either SportBack or Crossover trim trades sophistication for value.

These are the other compact five-door hatchbacks available with all-wheel drive. Expand your horizons, and the Matrix dukes it out with a broad range of small and useful models ranging from the Chevy Sonic to the Volkswagen Golf, with the Ford Focus, Hyundai Elantra GT, Kia Forte, and Mazda 3 serving as worthy vehicles to consider along the same spectrum. Toyota even competes against itself in this segment, in the form of the Scion xB.

My take is that the Matrix is cartoonish, what with its bulging lights, ballooning front fenders, tiny tapering side glass, wrap-around rear windows, and basket-handle roof rack design. The 17-inch wheels are the best looking things on the car, but they appear undersized in relation to the immature and exaggerated bodywork.

My test car was the Matrix S AWD painted Radiant Red, complete with silly spoiler tacked onto the trailing edge of the roof. Everywhere I drove, I felt like I was supposed to be heading to some kid’s birthday party at which I would be performing. I know people who have nightmares about clowns. The Matrix isn’t funny, Toyota

How It Looks and Feels

As is to be expected of a Toyota that starts at less than $20,000, the Matrix is full of hard, cheap plastic. At least the Matrix S gets metallic trim bits that serve to enliven the cabin, and it features refined and easy-to-use switchgear, which is common for Toyotas. What it doesn’t have is Toyota’s new Display Audio system with Entune technology, a blessing in disguise as that touchscreen system features tiny buttons and throws plenty of glare. By contrast, the simple knobs, buttons, and dot matrix display used for the Matrix’s stereo is a blessing.

The Matrix is a practical choice for people with dogs, or for people who carry dirty things on a frequent basis. Fold the back seat down, and the Matrix supplies 49.4 cu-ft. of non-slip, easy-clean cargo space in which Fido can frolic. Combine this space with the Matrix S model’s fold-flat front passenger’s seat, which is protected by a hard plastic cover, and we can see a surfboard easily fitting into the Matrix. Our test car also provided a handy 115-volt power outlet at the bottom of the dashboard.

The driver and front passenger sit on durable fabric facing a towering edifice of a dashboard. Rising up like Yosemite’s Half Dome and punctuated by enormous air vents, the control panel inspires both front seat occupants to wish for a seat height adjuster. Only the driver gets one, but the higher the seat rises, the more the bottom cushion dumps the driver’s body forward. That means a person can sit up high with their legs unsupported, or they can sit way down low with good thigh support and peer over the tops of the steering wheel and door panel sills to see where they are going. We chose a position in between.

Believe it or not, the Matrix’s back seat is a far more pleasing place to spend time. The bottom cushion sits high off the floor and provides excellent leg support. There’s enough clearance so that knees don’t contact the front seatbacks, and if you score the right rear seat and nobody is riding in front, you can fold that seatback down to create an ottoman for stretching your legs.

How Does It Go

Toyota provides two different engines in the 2012 Matrix. The Matrix L is equipped with a 132-horsepower, 1.8-liter four-cylinder engine driving the front wheels through a five-speed manual or four-speed automatic transmission.

We tested the Matrix S, which boasts 158 horsepower thanks to its larger 2.4-liter four-cylinder engine. A manual gearbox is standard on this model, too, with a five-speed automatic optional. Our test car also had AWD with active torque distribution, paired exclusively with a four-speed automatic.

So equipped, the EPA expects the Matrix S AWD to get 20 mpg in the city, 26 mpg on the highway, and 22 mpg in combined driving. That’s awful. Combine these ratings with a 13.2-gallon fuel tank, and you’re going to find that the Matrix never met a gas station that it didn’t like. We averaged 23.9 mpg on our first tank, almost all of that travel conducted on L.A.’s freeway grid.

Compare the Toyota’s thirst for fuel with, say, the new Impreza hatchback, which is rated to get 27 mpg in the city, 36 mpg on the highway, and 30 mpg in combined driving, and you might wonder how Toyota sells any Matrix models at all.

If you purchase a Matrix S with its racy body kit, mesh grille inserts, fog lights, alloy wheels, faux rear diffuser panel, and a rear spoiler thinking you’re going to get a car that’s both practical and fun to drive, think again. The Matrix is fairly practical, yes, but it is not fun to drive.

As long as you approach a Matrix holding modest performance expectations, you’re likely to be satisfied with how the car drives. The Matrix S delivers jaunty acceleration and handling, reasonably quick off the line and when equipped with the optional 17-inch Goodyear Eagle RS-A all-season tires, able to take city and suburban corners with spirit. The brake pedal feels good underfoot, and while the electric steering is slower than the flat-bottomed steering wheel would lead one to expect, effort levels are perfect for city and highway driving.

The Matrix does provide a choppy ride, however, with some hobby horsing on the sectioned concrete freeways common in Los Angeles. The S AWD’s four-speed automatic transmission is also reluctant to downshift from mid-range speeds, so passing in short zones is ill-advised, and when switching lanes in traffic you need to leave yourself plenty of room.

When the Matrix is driven to its rather low limits, it quickly reveals its modest Corolla underpinnings. The transmission’s reluctance to downshift becomes a liability when powering up mountains, the all-wheel-drive system vibrates and shudders under hard acceleration, the electric steering feels slow and numb on tight twisty two-lane roads, and the Goodyear tires fold over onto their sidewalls and wail in protest when tossing the car into a turn. The stability control system also proves too eager to step in and put the kibosh on whatever fun the driver might be attempting to have. Dynamically, the only component to withstand abuse – and on a day with temperatures approaching 100 degrees, no less – was the braking system.

The 2012 Toyota Matrix S AWD is best appreciated by people who live where the weather is lousy, who frequently carry long or dirty objects, and who are Toyota loyalists. But these buyers – even the Toyota freaks – are much better served by the Subaru Impreza if all-wheel drive is a priority, or just about any of the other five-door hatchbacks on the market if it is not.

Time to stick a fork in the Matrix, Toyota, because it’s done.

Toyota provided the vehicle and photography for this review 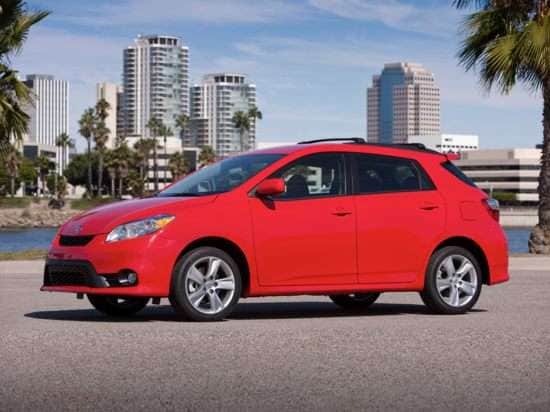