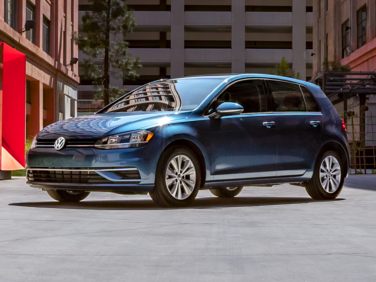 All About Volkswagen Golf

The story of the Volkswagen Golf goes all the way back to 1974, when the car was originally conceived as the replacement for the venerable Volkswagen Type 1, which is also known as the VW Beetle. For model year 1975, the first Golf was sold in the United States, albeit badged “Volkswagen Rabbit”. The Golf was also the first Volkswagen to be built in the United States. Further, that Pennsylvania factory was one of the first by a foreign manufacturer (and the first German one) to build cars in the U.S.

When it became obvious the days of the air-cooled VW were numbered, the company introduced its follow-up, the 1974 VW Golf. Where the Type 1 had been air-cooled, rear-engined, and rear-wheel drive, the Golf was liquid-cooled, front-engined, and front-wheel drive. As we mentioned before, the Golf was called the Rabbit in the United States when it was introduced. This persisted until 1984, when VW decided to go with the Golf name worldwide. However, the Rabbit name wasn’t dead yet. In 2006, VW went back to Rabbit—until 2010, when Golf nameplate came into favor again.

Whatever you call it though, there’s no arguing the success of the Volkswagen.

What’s more, the triumph of the Golf begat a host of similarly configured automobiles for Volkswagen, culminating in the turbocharged, 12-cylinder, all-wheel drive Volkswagen Phaeton ultra-luxury sedan. Furthermore, today, from a position gained largely on the strength of sales of the Golf, Volkswagen is one of the largest car manufacturing concerns in the world.

Additionally, the VW Golf is known for introducing a richly beloved phenomenon to the automotive world—the “hot hatch”. Debuting in 1976, as the Volkswagen Golf GTI, the VW wasn’t the first car to qualify as a hot hatch. However it is the car credited with popularizing the concept. Other sporty cars developed directly from the Golf include the VW Scirocco and the Audi TT. Mainstream cars owing their underpinnings to the Golf include the Audi A3, Volkswagen Jetta, and the Volkswagen Tiguan.

The Golf name is said to have originated form the naming convention employed by Volkswagen in which they named their cars after prominent winds or ocean currents. The name "Golf" is said to be derived from the German name for the Gulf Stream. Similarly, “Passat” came form the German name for the trade winds, while “Scirocco” is named for the hot Mediterranean wind emanating from the Sahara Desert, and “Jetta” is named for the Jet Stream. Built continuously since its launch back in 1974, the Volkswagen Golf is now in its seventh generation of production.