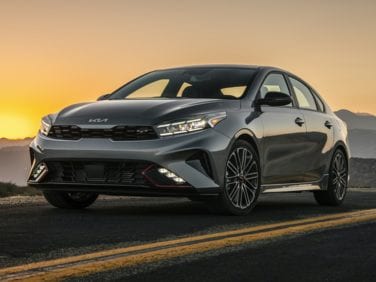 All About Kia Forte

The Kia Forte is a four-door, five-passenger compact sedan. The Forte will compete against other compact sedans including the Toyota Corolla, Honda Civic, Ford Focus and Chevrolet Cobalt. Just as the Kia Spectra replaced the compact Sephia sedan after two generations, now the all-new Kia Forte will replace the Spectra after a decade of service. Kia introduced its 2010 Forte sedan at the 2009 Chicago Auto Show. As the compact sedan segment has grown in popularity following record-high gas prices last year, the competition in this segment has intensified. Luckily for the Forte, Kia made sure it offered attractive styling, a competitive powertrain and an interior comfortable, entertaining and sporty. Although pricing has yet to be announced for the replacement to Kia’s best selling model, the all-new Kia Forte will go on sale late this spring with a price tag fairly close to the current 2009 Spectra’s starting MSRP of $14,200. The Kia Forte will come with three distinct trim levels: the base Forte LX, mid-level EX and the sporty SX. Instead of replacing the Spectra5 with a hatchback version of the Forte, the all-new Kia Soul will be replacing this model. Like the rest of Kia’s lineup, the Forte is covered by a five-year/60,000-mile basic warranty and a 10-year/100,000-mile powertrain warranty.

In terms of styling, the new Forte gets a revolutionary design from Kia, which should help the car grab a larger share of the compact sedan market. Although Kia's vehicles have always been a hodgepodge of different designs, the new Forte shares many traits with the midsized Optima. The sleek compact sedan drops the conservative, economy-car styling of its predecessors and offers up an angular, wedge-shaped styling reminiscent of the current Honda Civic. Angular lines and hard creases are abundant on the new Forte such as the stylish character line that runs from the length of the car starting at the headlights and running back into the decklid. From the back, most of the attention is going to the taillights that are very similar to those of the current Mitsubishi Lancer, but the rear view of the car also hosts many stylish body lines such as the integrated decklid spoiler. Despite the obvious similarities between the new Forte and the existing Civic and Lancer, nothing can take away from the car’s unique styling. If nothing else, it just shows that the company is finally ready to play with the big dogs.

Growing in just about every dimension compared to the Spectra, the Kia Forte is noticeably more spacious inside. Compared to the Spectra, the Forte’s cabin is sportier, roomier and packed with more convenience features. With one of the largest backseats and trunks in this segment, the Forte will definitely be a good choice for first-time car buyers or drivers who are wanting to get more fuel-economy out of his or her car without giving up interior space and style. The large three-pod instrument gauge layout and sports steering wheel helps carry the exterior’s unique look into the cabin, while the canter stack improves upon what the Spectra previously offered. As for the fine details, the SX model will feature red stitching on the seats and comes standard with a tilt and telescoping steering column. Other useful devices include Bluetooth connectivity, USB port for easy iPod use, auxiliary jack and two 12-volt power outlets. The 2010 Kia Forte provides comfortable seating for five, but it should also provide enough driving pleasure to make the driver not mind toting his friends around.

Under the hood, the Forte will pack three distinct drivetrain setups. First, the Forte LX and EX models will get a fuel-efficient 2.0-liter inline-4 with either a four-speed automatic or a five-speed manual as the only transmission options. For added performance, the Forte SX gets a peppy 173-horsepower, 2.4-liter inline-4 with transmission choices of either a five-speed automatic or a six-speed manual. Finally, a special Fuel Economy Package will pair the smaller engine option with the SX’s five-speed automatic along with adding aerodynamic enhancements and low-rolling resistance tires to maximize the Forte’s fuel economy estimates at 26 miles per gallon in the city and 36 mpg on the highway. All Forte models feature MacPherson struts and a stabilizer bar up front, while the rear suspension now uses a torsion beam setup. Helping to put the Forte among the top performers in this market, the sportier SX gets a performance-tuned suspension and larger diameter from brakes.