Considering how long Scion's line-up revolved around a certain box-shaped hatchback, the launch of the second-generation tC last year has sparked an incredible growth that will soon add the sporty, rear-wheel drive FR-S and, at the opposite end of the spectrum, the all-new 2012 Scion iQ micro car. Although we won't get to test out the FR-S until next year, we recently had the chance to drive the new iQ in South Florida to see how such a small car looks and feels in the big city. As Toyota's youth-oriented brand, Scion's launch of the iQ will give it a car that will probably stand out even more than the original xB did back in 2004 while continuing to give buyers plenty of customization options.

Assembled in Japan, the 2012 Scion iQ is currently on sale only on the west coast of the U.S., but it will be available in Scion dealers across the country by March following a regional rollout (check Scion's website for specific rollout dates). The starting MSRP for the mono-spec iQ is $15,995 (including the $730 destination charge), but buyers can easily customize their new car with a variety of port- and dealer-installed options and accessories to a price of well over $20,000 if every box is checked. We were able to test out three distinct models of the Scion iQ ranging from a fairly stripped-down model up to a well-equipped version.

Considering its size, the 2012 Scion iQ will always be compared to the Smart fortwo, but other vehicles in this "premium micro subcompact" segment include the FIAT 500 and MINI Cooper; and don't forget about the upcoming Chevrolet Spark. Scion admits that while its target demographic is younger buyers, it hopes the new iQ will have the same impact on the market as the first-generation xB that was popular with just about every age group. Even better, it turns out that Scion is a gateway brand for Toyota with 70 percent of Scion buyers being new to the Toyota family. Scion did not release expected sales figures for the 2012 iQ, but the Toyota version of the car has been a strong seller in both Europe and Japan since its introduction in 2008. Besides, the Scion iQ will probably be more of a niche vehicle leaving the xB and tC to continue to be the brand's high-volume models.

Somehow, Toyota managed to design the 2012 Scion iQ with proportions that don't make it look as scrunched up as some of its competitors meaning that the small stature of the iQ really isn't even that noticeable until you're standing next to the car. Standing at just 59.1 inches tall and 66.1 inches wide, the Scion iQ has a squatted stance, but its overall length of 10 feet means that it is shorter than the wheelbase of a Chevrolet Suburban. The exterior styling not only helps to take away from the car's small size, but in a segment filled with "cute" cars, the Scion iQ is able to pull off better adjectives like "cool" or "sporty" thanks to its hard lines and aggressive appearance. All iQ models have the same basic styling with the sporty front fascia, projector beam headlights, blacked-out, clear-lensed taillights and tasteful side body creases that accent the high beltline and D-shaped rear quarter windows. One of the cars we drove (the iQ painted in Hot Lava orange shown in this picture) was equipped with the $399 TRD lowering springs which gave the iQ a more aggressive stance dropping the front by 1.2 inches and the rear by 1.5 inches.

Unlike other micro subcompacts, the 2012 Scion iQ delivers an impressively spacious front seating area which is made possible by to the concave instrument panel allowing the passenger front seat to be positioned slightly ahead of the driver's seat in a unique "3+1" seating configuration. The relocation of the glove box (to a tray under the front passenger seat) and the HVAC blower motor (to behind the center stack) opened up enough space so the front passenger can be seated comfortably with another passenger in the back; the seat behind the driver is reserved for very small passengers or cargo. The image here shows the passenger seat with enough space for a 6-foot-tall passenger to fit in the front seat and in the rear seat although with a person of this same height driving the iQ, the driver's seat actually touches the front edge of the rear seat. There were fewer ways to improve space for the driver, but Scion managed to do so by giving the iQ a steering wheel with a somewhat-flattened bottom edge which frees up some knee space for the driver and also helps add a bit of sportiness to the cabin.

Much like its exterior styling, the interior of the Scion iQ is designed to keep the car looking and feeling like a conventional car rather than being shrunken down. Varying trim colors and fabric patterns help give the iQ its unique interior, but a few of the iQ's top cabin design elements include the contrasting stitching narrow, vertical center stack with the 3-D enclosure for the audio system which seemingly pops out of the top of the center stack. Scion also made the iQ feel big by giving it plenty of standard equipment such as steering wheel audio controls, aux jack, USB port, HD Radio and Bluetooth (phone connectivity and audio streaming), but, surprisingly, cruise control is not available on any iQ.

Since there is only so much space that can be shifted around for passenger comfort, the cargo area is one element of the iQ that really suffers. Scion says that the iQ can hold 3.5 cubic feet of cargo with the rear seats in place, but that is going to have to be some small cargo as an SLR camera could hardly fit behind the seat.

Just like all other Scion models, the 2012 Scion iQ comes in a "mono spec" packaging meaning that it comes in one trim and all of the add-on features are installed either at the port or at the dealership which allows for greater customization by buyers and quicker delivery. Some of the features you should be sure to check out include the 16-inch alloy wheels, body-colored rear spoiler, seven-color ambient cabin lighting and two optional audio system head units (the $479 upgraded Pioneer head unit and the $1,999 SD-card based navigation system).

Like its size, the 2012 Scion iQ is powered by a small 1.3-liter inline-four that puts out 94 horsepower and 89 lb-ft of torque, and power is sent to the front wheels through a continuously variable transmission (Toyota's first non-hybrid vehicle to use a CVT). With such a low engine output, this CVT felt just fine in the iQ, and it also delivered a sportier "S" mode as well as an engine-braking "B" mode. The Scion iQ's combination of its engine, CVT and small size resulted in EPA fuel economy estimates of 36 miles per gallon in the city and 37 mpg on the highway. This will give the Scion iQ a combined fuel economy rating of 37 mpg which will make it the highest of any non-hybrid car on the market. Toyota has also been developing an all-electric version of the iQ, but it is unclear if this model what a possible production time frame might be or if it will ever make it to the U.S.

We had the chance to test out three different 2012 Scion iQ models all with varying levels of optional equipment ranging from almost stock to seemingly fully loaded. The iQ is definitely geared toward drivers with mostly city commutes, and thanks to its tight electric power steering system (Scion says the iQ has a turning radius of just 12.9 feet), U-turns and parallel parking are a breeze. During this test drive, we were able to complete a full U-turn on a normal city side street (two lanes) as well as parallel park in a small space quickly and easily. While the electric power steering gives the Scion iQ impressive low-speed maneuverability, it feels just as compliant at highway speeds. Despite its super short wheelbase, the iQ is surprisingly easy and fun to drive, but those looking for the sportier look of the TRD package should expect a very harsh ride. The most surprising thing about the Scion iQ is that its spacious cabin leads to a driving experience that feels more like a normal car rather than something slightly larger than a Smart ForTwo.

The 2012 Scion iQ has yet to receive safety ratings from either the National Highway Traffic Safety Administration (NHTSA) or the  Insurance Institute for Highway Safety (IIHS), but it did get a five-star rating from Euro NCAP (Europe's safety rating organization). All 2012 Scion iQ models come standard with 11 airbags, electronic brake-force distribution with brake assist, four-wheel anti-lock brake system, tire pressure monitoring system (TPMS), Vehicle Stability Control (VSC) and traction control. The 11th airbag in the iQ is a unique rear window airbag that helps protect rear occupants in the event of a rear-end collision since their heads are positioned so close to the rear window.

When it comes to the Scion iQ, there are smaller cars on the market and there are more fuel efficient cars on the market, but no other car is able to deliver such a "normal car" driving feel with such a tiny footprint. The most notable advantage of the iQ is that it only feels as small as it is when you want it to (i.e. tight parking maneuvers), but, that being said, it does come at a higher starting price than bigger cars (even in the Toyota family). Still, Scion finds yet another creative way to attract new buyers to its showrooms much like it has done with cars like the xB and tC. With the addition of cars like the FR-S and iQ in its line-up over the next year, Scion should easily see its sales increase even more than the 8 percent rise so far in 2011.

Scion provided lodging and vehicle for this review.
Photos by Jeffrey N. Ross 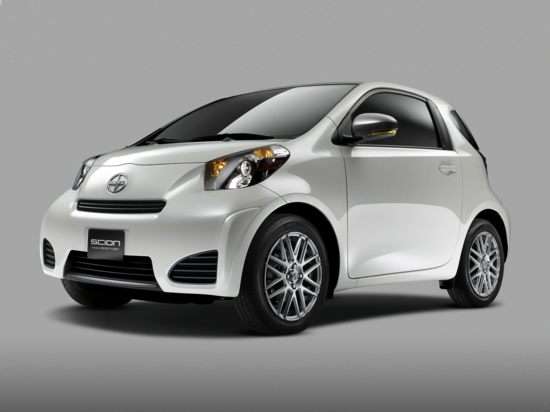