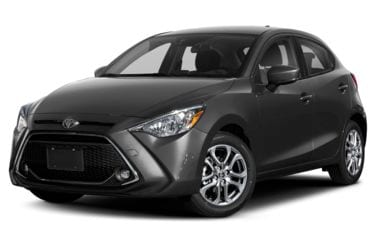 All About Toyota Yaris

The Toyota Yaris is a four-door, five passenger compact sedan, and a three-door, five passenger compact hatchback. The Toyota Yaris was initially sold in North America as the Echo. The Echo was the ultimate in entry-level from Toyota, providing very basic transportation and good fuel economy in a package that became quite popular despite its lack of pretension. In 2005, the Echo changed its name to the Yaris in the U.S. market, and it adopted a more egg-shaped, swept-back look. The engine and appearance might have changed, but the quirky, center-mounted dashboard gauges remained, and the Yaris grew to have an even larger cult following, helped in part by the Toyota-sponsored Yaris Cup racing series.

While enthusiasts might choose to enter their Yaris’ in competition, most buyers are content to enjoy the more pedestrian aspects of Yaris ownership. The foremost amongst these is fuel economy. The 2008 Yaris is available as both a four-door sedan and a three-door hatchback, and both of these versions are outfitted with 1.5 liter, 4-cylinder engine that provides 36 miles per gallon on the highway, and an excellent 29 miles per gallon in city driving.

The fact that this small-displacement engine only produces 106 horsepower plays a large role in the fuel numbers. However, this is not to suggest that the Yaris is underpowered. The front-wheel drive Yaris functions extremely well as a commuter car, whether it be from town to town or one end of the city to the other. Both the sedan and the hatchback feel at home on the road, and while acceleration is not spectacular, passing is safe and manageable, even at interstate speeds. Buyers can choose between a 4-speed automatic transmission and a 5-speed manual, although to truly get the most benefit out of the 1.5 liter engine, the manual is recommended.

The Yaris has an interior that feels roomier than it should, given the vehicle’s small size - although the sedan, not the hatch, is obviously the better choice if transporting up to 5 adults is in the cards. Base equipment offers air conditioning, but does not include a radio, meaning that buyers will have to upgrade to the S trim in order to enjoy music while driving. The S trim also includes a rear wiper and defroster, as well as larger 15-inch wheels to replace the base model’s 14’s. While those are the only two trim levels available, consumers can choose from an array of option packages which include features such as power door lucks and windows, a split rear seat, cruise control and anti-lock brakes. Keyless entry is also available as an a extra option.

Although the Yaris provides excellent value for the money, it is still at the very bottom of the Toyota pricing pyramid. What this means is that although the vehicle is well put together, it does suffer from engine noise, especially when the small 1.5 is winding up during passing. However, while the car may feel small and occasionally be buffeted by high winds from passing eighteen-wheelers, the Yaris never seems dangerous nor handles in a manner that would worry a cautious driver.

The 2009 Toyota Yaris sees a new body style added to the mix in the form of a 5-door hatchback. The 3-door hatch and the 4-door sedan are also still available. Each edition of the 2009 Yaris can be had in either base or S trim, and each features the same, 106 horsepower, 4-cylinder engine. Displacing 1.5 liters and providing 103 lb-ft of torque, a 5-speed manual transmission is available on the 3-door and the sedan, while the 5-door is exclusively outfitted with a 4-speed automatic. Fuel economy for the 2009 Yaris is rated at 29 miles per gallon in city driving and 35 miles per gallon on the highway.