Not long ago, mid-size sedans were the best-selling vehicles in America, but the motoring public's tastes have shifted. Notice how few ads you see nowadays for mid-size sedans like the Mazda6, Honda Accord, and Ford Fusion? The automakers are pumping their marketing dollars into lucrative SUVs. And yet the Camry remains popular with buyers, selling steadily as its competitors lose market share. Toyota believes in playing the long game, and it's obvious they've made a significant investment of time, money and engineering expertise in the all-new 2018 Toyota Camry.

In search of excitement.

In search of excitement.

The Camry has a reputation (not entirely undeserved) for being a bit of a bland car, and Toyota is looking to change that. No big surprise that they've started with the styling, though it is a bit of a big surprise that the changes are relatively subtle. The basic size and shape of the Camry remains unchanged, but Toyota has followed current trends and given the body more creases, creating the illusion of a skin stretched over a frame — the car-that-went-to-the-gym look that has become so popular. They're also looking to put an emphasis on the sport-tuned SE and XSE models, and so they have given them unique styling cues, most notably a more aggressive front end with blacked-out grillework.

Inside, the changes are even more meaningful. Toyota's interiors have gotten a bit bizarre in recent years, but the Camry's cabin has remained buttoned down and a bit nebbish. The new Camry is built around an asymmetric center panel, the focal point of which is a big touch-screen display. But they haven't gone totally electronic on us: Unlike rival Honda, which has succumbed to touch-sensitive mania, the Camry's stereo has proper knobs for both volume and tuning — big ones that feel good in your hand. Likewise, the A/C controls are nice and simple. Anyone getting in a Camry for the first time will find the control layout instantly familiar. It's a low-distraction environment that improves driver safety (because you can't look at the road if you're staring at the stereo trying to figure out how to change the station).

A new approach to navigation...

A new approach to navigation...

There's one minor curiosity: Toyota only offers a traditional navigation system in top-of-the-line XSE and XLE models, and the stereos are not compatible with Android Auto or Apple CarPlay. Instead, Toyota uses their own smartphone program called Scout GPS, a subscription-based navigation app (The first three years are free; after that, owners must pay $25 per year). The app runs on your smartphone and uses your mobile data plan for data, and the best thing about it is that it can display the map right on the stereo screen.

The problem with Scout...

The problem with Scout...

The problem is that Scout GPS doesn't allow you to download “offline” maps like you can with Google Maps, so if you try to set a route where you have no data connection, you're out of luck. The system should work fine in urban areas, but if you get lost in the middle of nowhere, Scout GPS is about as useful as Spotify to guide you where you are going. We think this is a major problem: The chief advantage of a built-in navigation system is that it works in places where phone-based navigation doesn't. It would be better if Toyota offered built-in nav as an option — or at least Android Auto and Apple CarPlay, which also project on the screen and can take advantage of Google's offline map feature.

Let's get back to what we like about the Camry's interior. The first example we drove at the press preview impressed us with lovely contrasting-color stitching throughout the interior and soft-touch material atop the dashboard (in fact we liked the latter so much that we wish they'd used more of it on the door panels, which are a bit hard in places). And this wasn't a high-end XLE or XSE model, mind you — it was the volume-selling LE, which is one up from the base model. Naturally, the high-end Camrys are even nicer. Toyota is even offering a red leather interior for the XSE model, which is the kind of thing we're used to seeing in sporty BMWs. Heavens to Betsy, what's next? Dancing?

Better chassis hardware, but steering lets it down

Better chassis hardware, but steering lets it down

Toyota has engineered the Camry to be a more engaging car to drive. A few years back, they introduced the sporty SE model, and it's been a success; it shares the volume-selling limelight with the LE model, and Toyota added a more luxurious version, the XSE, to complement the posh XLE trim. For the 2018 Camry, Toyota has upped the game with a control-arm rear suspension, a pricier setup that adds handling precision, and once again the SE and XSE models have stiffer tuning for the steering and suspension.

Handling is definitely improved over the old Camry; the new car runs through the corners with more poise, confidence, and speed, and the SE is notably firmer and somewhat more athletic. But as much as Toyota would like to promote the Camry as a driver's car, it's just not there. The steering is precise and there's no side-to-side wander on the highway — nice — but it has a lifeless, feedback-free feel to it. If you own an older Camry — or a Nissan Altima — you're likely to think the new Camry is a revelation, but if you've spent any time behind the wheel of a Mazda6 or a Volkswagen Passat, you probably won't be very impressed.

The powertrains have been revamped, and here Toyota has done an excellent job. While other automakers are moving towards small displacement turbocharged engines, Toyota is sticking with the traditional big four and V6, though both have been heavily revamped, and both are fitted with an eight-speed automatic transmission (which improves acceleration and fuel economy over the outgoing six-speed). The four-cylinder is our favorite: It now turns out a strong 203 horsepower (206 in XSE trim), a jump of 25 hp over the outgoing Camry, and with 184 lb-ft of torque available (186 in the XSE), acceleration is strong, if a bit noisier than we expected. And lest you think fuel economy suffers, most four-cylinder Camrys are EPA-rated rated at 28 mpg city and 39 mpg highway, edging out the formerly-best-in-class Nissan Altima (EPA-rated at 27/39). The base-model Camry L does even better: It's rated at 29 MPG city and an astonishing 41 mpg on the highway.

The optional 3.5-liter V6, offered exclusively in XSE and XLE models, gets a 33-hp bump, and at 301 hp it breaks the 300-horse barrier. (A 300 horsepower Camry ) The V6 is notably smoother and quieter than the Four, but seat-of-the-pants acceleration feel isn't as big a leap as you might expect; we'd stick with the 4-cylinder for its better fuel economy.

That said, if fuel economy is important to you, you'll want to opt for the hybrid powertrain, which has also been reworked for 2018. Benefiting from some of the improvements made to the freshly-updated Prius, the 208-horsepower Camry Hybrid is more efficient than ever. SE and XLE models (yes, there's a sport-tuned Camry Hybrid!) are rated at 44 mpg city/47 mpg highway, while the LE model, which gets a different battery pack, is rated for 51 mpg in the city and 53 mpg highway. (We generally don't use exclamation marks in our reviews, but we're tempted.) Those numbers are comparable to the previous-generation Prius, and they far exceed any other mid-size hybrid sedan. Go Camry!

A commendable commitment to safety

A commendable commitment to safety

We're impressed by the new Camry's fuel economy, but we're equally impressed by Toyota's commitment to safety. All Camrys — even the bottom-of-the-line L model — get Toyota's Safety Sense P system, which includes collision detection with automatic braking and pedestrian detection (translation: If you're about to hit something, the Camry slams on its own brakes), lane departure warning with steering assistance, automatic high beams, and adaptive cruise control (which slows to match the speed of the car in front). And if it all goes wrong, the Camry's interior is protected by ten airbags. Not all of the Camry's competitors offer this much active safety hardware, and many of them only offer it on higher trim levels. None (so far) offer all this equipment as standard, and we applaud Toyota for making this vital safety equipment available to all Camry buyers at no extra charge.

Camry vs the competition

Camry vs the competition

Toyota has priced the entry-level Camry L at $24,380 (including an $885 destination charge), a good deal considering all of the advanced safety features that come standard. Hybrid Camrys start at $28,685, and fully-kitted-out examples will top out in the mid-to-high 30s. Toyota expects most buyers to go for the $24,885 Camry LE or the $26,085 Camry SE.

How does the Camry compare to the competition? It definitely has its weak points: Back-seat legroom isn't as expansive as the Volkswagen Passat or the Honda Accord (or, for that matter, the outgoing Camry), and while the driving dynamics are definitely improved, the Camry still isn't as exciting a drive as the Ford Fusion or the Mazda6. But we like the design, and in terms of safety, there's no contest — the 2018 Toyota Camry is far ahead of the pack.

In other words, the Camry is what it has always been: Safe, practical, and reliable. We have no doubt it will continue to be a best-seller. 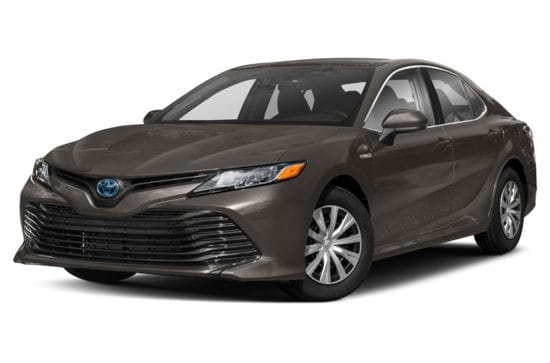