Hail to the Chief

I am not a trained and licensed taxi driver, but it was a secret fantasy of mine (until now) to be one.

Taxi culture is integral to life in New York, and to a lesser degree most cities in the United States. Where we can’t go by car, we hail a cab. Yes, in places like Los Angeles where transportation is scattered and there is neither rhyme nor reason to traffic patterns, taxis take a back seat, but are still there for those nights when you can’t otherwise get home.

The New York yellow cab is an icon that has global and wide-reaching impact. It has defined my city as other fads have come and gone. And I’ve always wanted to sit at the helm and deliver people to their destinations. (I do it all the time in test cars, as it stands.) Being a New York cabbie commands a certain kind of rough attitude, and an intimate knowledge of the city’s thoroughfares and secret passages.

I studied the routes from behind the plexiglas barrier for years, and then applied all the taxi drivers’ rules to my own driving. Where the cabbies turn, I turn. The gas stations where they fill up must be the least expensive and quickest. The ramshackle eateries where cabbies from around the world stop to get a quick plate of food are probably the most authentic tastes of home that the city has to offer. I longed to try out a day in this world.

So, when Nissan offered five days driving the new NV Taxi, which had won over the hearts of New York’s bureaucrats to become the Taxi of Tomorrow -- legal implications notwithstanding -- I accepted without hesitation.

Herein, some of the things you learn from an unlikely stint behind the wheel of the most invisible car in Manhattan.

One: The Nissan NV Taxi is great for passengers.

One: The Nissan NV Taxi is great for passengers.

It may fit within the shadow of a Ford Crown Victoria, but the Nissan NV Taxi is expansive enough to comfortably fit three passengers in back, in addition to one up front. The materials in the cab tester were a cut above the hard plastics and slippery vinyl found in some commonplace, aging taxis. (When was the last time you saw contrasting yellow stitching in the Prius waiting outside Penn Station?)

There is enough legroom in back that jump seats, like the ones rumored to be fitted to the new London black cab, make total sense. Of the 10 "fares" who had the chance to try it out, there was nary a complaint. Like some older minivans, the bench does not adjust its individual seats, so it's going to stay in position regardless of the demand for cargo space. Sliding doors made entry and exit easy, and reduce the chance of nailing a wayward cyclist with one half flung-open.

A plexiglass shield separates driver from passengers, and a handy intercom -- with microphones above driver and rear passenger -- ensures clear communication when you want it, and relative silence when you would rather have a quiet ride. There are separate climate controls for rear passengers, in addition to USB charging ports. We relish the concept of charging a phone in the taxi, but wonder if we'd ever be in the cab long enough to really juice it up.

Two: It's good in traffic. And in the snow.

Two: It's good in traffic. And in the snow.

Cab drivers develop a camaraderie, and look out for one another on the road. They’re fully aware that driving in New York is a game that never ends, and if you’re not playing, you’re doing it ever so totally wrong.

I was initially nervous that the NV Taxi, equipped with a four-cylinder engine paired with a continuously variable transmission (CVT), would lack the necessary thrust to play ball with Toyota Highlanders, Ford Transit Connects, and the occasional Toyota Camry or Nissan Altima cabs. Off the line, the result was surprising, thanks to relatively light weight and small, skinny tires. It won't win a stoplight drag race, but that's OK: most cab riders would probably prefer to avoid the sport completely.

It also fit into the narrow gaps in traffic so coveted by veteran -- or crazy -- drivers. For some semblance of control over the shifting, drivers can drop the gearshift into "low" and disable "overdrive."

A major blizzard, which paralyzed New York City, coincided with my loan of the NV Taxi. No matter! A front-wheel-drive van would surely plow through the rough stuff, right? Almost. Lacking four-wheel drive and purpose-driven tires, a crosstown trip of some distance was limited to single-digit MPH. Similarly, a drive over the Manhattan Bridge later that night required extra care to avoid the blustery crosswinds taking control.

Overall, though, the NV Taxi handled the New York torture test much more smoothly than expected -- especially for a compact cargo van.

The morning that the NV Taxi arrived at my garage, I also received a text, out of the blue. It was my college friend, Rebekah.

What are you driving this week?

Those types of texts are usually the beginning of a longer conversation. And, in fact, she was moving house! In the middle of the aforementioned snowstorm, I drove up to her Upper West Side apartment to see if I might be able to help.

With some effort, we fit a full-size mattress in the passenger compartment, and crammed the cargo area with knickknacks and assorted boxes. Rebekah jumped in the cargo area and, smushed between the mattress and the rear bench, then piled on more items. It may have been a stretch, but we nearly accommodated an entire studio apartment. Neat.

In the five days that the NV Taxi was in my possession, I used it as a daily driver, regardless of its bright yellow livery and the anticipated proclivity for tourists to clamor for a ride. (A wrench in the fire was that there was no switch to turn off the lighted "VACANT" signs while I was driving, giving false hope to the chilly and the stranded.) Since I wasn't supposed to stop for actual fares, I arranged to pick up friends and family members who would rather not walk or take public transportation.

The only ones unfazed by the sight of a yellow cab entering the facility? My local garage attendants, who have stopped questioning who I might be, and what I drive. 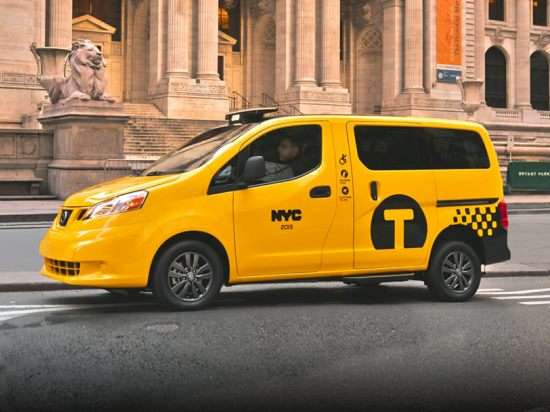