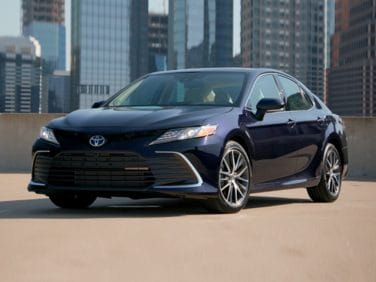 All About Toyota Camry

The Toyota Camry is a four-door, five-passenger family sedan. The Camry is manufactured in Georgetown, Ky. alongside the Toyota Camry Solara, Toyota Venza and Toyota Avalon. Toyota has a solid reputation when it comes to making extremely reliable cars, and the Camry is no exception. Long the flagship sedan for the company in North America, the Toyota Camry has been on sale in the United States for more than 25 years. While the station wagon model may have come and gone over the past 2 decades, the 4 door remains Toyota’s strongest seller, and is a perennial front-runner for most-purchased vehicle in the world. The Camry is also the standard against which family sedans are judged in the U.S. market.

Like most modern vehicles, the Toyota Camry has grown both larger and heavier with each passing redesign. This is mostly due to the incorporation of bulkier safety features such as multiple airbags and crumple zones, but it also has to do with the market expecting a longer list of optional features such as air conditioning, leather seats and performance packages. For the 2007 model year, Toyota released increased the wheelbase of the Camry yet again, providing more interior space without altering the overall length of the vehicle’s body. The exterior of the car was also updated in an attempted to add some excitement to the traditional plain brown wrapper that usually accompanied each successive version of the Camry. A more aerodynamic front end was grafted on to the vehicle, and while the effort renders the car less anonymous than its predecessors, it’s still not going to catch the eye of the enthusiast crowd.

That is perfectly fine with Toyota, however, since they are far more interested in the millions of buyers who are very interested in the Camry – drivers with families who need more space than a compact car can offer them, but don’t require the roominess of a minivan. The base Camry comes bundled with a 158 horsepower 4-cylinder and a 5 speed manual or automatic transmission. Higher trim models are all equipped with the familiar 3.5 liter 268 horsepower engine which has come to define this class of sedan. A 6-speed automatic is the only transmission choice. For ecologically conscious buyers, the Camry is also available as a hybrid, although this edition of the vehicle has been criticized for its weak performance and unimpressive fuel mileage. These faults are due to the weight of the vehicle, which is simply too large to be effectively mated with this type of drive train. Honda actually no longer offers a hybrid version of the Accord for precisely this reason.

The Toyota Camry is an all-around champ that does almost everything well. While it may not have jaw-dropping performance numbers or a wide range of gadgets, it fills its role in Toyota’s lineup admirably. The interior is well designed and logically laid out, and even the 4-cylinder delivers good fuel economy despite the heavy platform – 31 miles per gallon on the highway, and 21 miles per gallon in stop and go city driving. While the vehicle may lack both individuality and personality, it more than makes up for it with excellent reliability and outstanding value for its class.

The 2009 Toyota Camry is a carryover from 2008. The 2009 Camry is sold in several different trims levels: base, LE, SE, XLE and Hybrid. All versions of the car have the option of a 2.4 liter, 4-cylinder engine that generates 158 horsepower and 161 lb-ft of torque. This is the sole option in the base model, where it can be paired with either a 5-speed manual or automatic transmission (the XLE is automatic only). Fuel economy is rated at 21 miles per gallon in the city and 31 miles per gallon on the highway.