The Hyundai Santa Fe Sport isn’t always easy to classify. This five-passenger crossover slots in size between the compact and mid-size classes — it's bigger than a Ford Escape or Nissan Rogue, but smaller than a Ford Edge or Nissan Murano. It’s easy for such vehicles to slip through the cracks, unnoticed by customers who only cross-shop direct competitors. But in its last year on the market, the 2018 Santa Fe Sport offers an especially appealing combination of value and luxury to the right buyer.

Priced from $24,950, it’s less expensive than some comparably equipped compact models. But it delivers the wider, airier cabin and the substantial big-car feel of a mid-size crossover. It also includes Hyundai’s uncommonly generous warranty coverage. While not everything was perfectly executed, the 2018 Santa Fe Sport is absolutely worth a look if you’re looking for refinement on a tight budget. Let’s go over the details.

The Santa Fe appeared as a compact crossover in 2001. The second-generation Santa Fe, sold from 2007 to 2012, grew half a size and added an optional third-row seat. For the current generation, introduced in 2013, the five-passenger Santa Fe Sport replaced the old Santa Fe. Hyundai then applied the Santa Fe name to a bigger seven-passenger model, an extended-length version of the Santa Fe Sport. (In the image on this page, the tested 2018 Santa Fe Sport is shown above the longer Santa Fe.)

This coming winter, Hyundai will flip the script again: A new 2019 Santa Fe will replace the Santa Fe Sport as a five-passenger crossover, and the seven-passenger vehicle will be renamed Santa Fe XL.

Affordable Pricing, With a Caveat

Affordable Pricing, With a Caveat

However, the Santa Fe Sport’s affordability can take a hit if you want some desirable safety gear, including an emergency automatic braking system. This feature comes only in a pricey options package on the top-of-the-line Ultimate trim. The price? $38,230. Our test car added all-wheel drive to hit $39,875. That’s not a bad deal considering all the luxury equipment included at that price, especially given today’s discounts. But you don’t have to spend this much to stay safe. Many crossovers make high-tech safety features widely available or even standard equipment.

The Santa Fe Sport isn’t outstanding for its ride quality or its handling — in both areas, it’s pleasant but not the class leader. It’s generally smooth and quiet, though the biggest bumps can register a bit sharply. And it’s easily maneuverable and never feels clumsy, even if it’s not outright sporty on a winding road. (The “Sport” name just meant “Santa Fe Size Small,” not that it’s the sports car of crossovers.)

But the Santa Fe Sport has one big advantage over its smaller competitors. Literally. It’s bigger. That extra weight, extra width, and extra wheelbase lend the vehicle a more solid, substantial feel than you’d find in a Honda CR-V. Quietly and confidently, it plows down the road like the two-ton vehicle that it is. The Hyundai’s competence is so unassuming that it’s easy to take it for granted — until you drive the Santa Fe Sport back-to-back with a smaller crossover.

The Santa Fe Sport shares its cabin with the larger, more expensive Santa Fe. That’s good news for the Santa Fe Sport, because its cabin trimmings had to match the expectations of a higher price bracket. Its interior is free of assembly flaws, moving pieces operate smoothly, and the materials look and feel nice. The dashboard design dates back to 2013, but it’s aged well, the controls are user-friendly, and there's well-executed storage space.

Every Santa Fe Sport has a touchscreen infotainment system. The base car has a tiny 5-inch screen, but if you choose any optional equipment, it comes bundled with a larger one. The most common is a 7-inch unit that features Android Auto and Apple CarPlay smartphone integration, and our tested car upgraded to an even bigger 8-inch screen.

The Santa Fe Sport is wider than compact crossovers like the Ford Escape and Nissan Rogue, which puts some extra distance between the driver and the front passenger. There’s less jockeying for position on the center armrest, while the seats themselves are wider than the compact norm and quite comfortable. The rear seat fits three adults without much squeezing. Surprisingly, though, there isn’t any more rear legroom than in several smaller models.

Cargo space also trails the smaller Rogue, CR-V, and Toyota RAV4. These compact crossovers were designed with super-low cargo floors, which also ease loading and unloading, while the Hyundai was not. Its rear seat doesn’t fold and rise back up as easily as the best crossovers, either, or lie perfectly flat. That said, the Santa Fe Sport has ample room by most standards: 35 cubic feet behind the rear seat and 71 cubic feet with the seat folded down. Another perk: It folds in a 40-20-40 split, giving you extra flexibility between passengers and cargo.

The Santa Fe Sport offers a choice of two four-cylinder engines: a base 2.4-liter with 185 horsepower or a turbocharged 2.0-liter with 240 horsepower. The 2.0T trims, using the latter engine, cost roughly $2,000 more than comparably equipped 2.4-liter models. They also have more standard features as well as some options that aren't offered with the base engine.

Both the Santa Fe Sport's engines offer respectable pep, but the turbo is quicker, smoother, and quieter. You won’t get the invigorating rumble and roar of a good V6 engine — more of a gentle whir, particularly in routine driving. But some buyers will prefer this mild-mannered approach to zippy acceleration. No V6 is available, unlike on several competitors or the seven-passenger Santa Fe. All Santa Fe Sport models use a six-speed automatic transmission.

The Santa Fe Sport’s weight gives it an admirably substantial feel, but it cuts into the crossover’s gas mileage. While Hyundai pitches the turbocharged four-cylinder engine as a more efficient alternative to a V6, several six-cylinder competitors are actually more efficient. Even the less-powerful 2.4-liter is on the thirsty side for a compact crossover.

EPA ratings for the Santa Fe Sport range from 24 miles per gallon in mixed driving for the front-wheel drive 2.4-liter to 21 mpg for the tested all-wheel drive turbo. We saw about 22 mpg during a weeklong test. Compare these figures to the mixed-driving ratings of the Honda CR-V, which gets up to 30 mpg, or the V6-powered Nissan Murano, which gets 24 mpg. In fact, even the V6-powered seven-seat Santa Fe trails this four-cylinder model by just 1 mpg.

The Santa Fe Sport scored five out of five stars in crash testing by the National Highway Traffic Safety Administration, and it earned the top designation of Top Safety Pick Plus from the Insurance Institute for Highway Safety. However, a familiar caveat returns: Although the Santa Fe Sport earned top IIHS grades for its emergency automatic braking system — it stopped the car entirely in a 25-mph test — Hyundai restricts that valuable feature to the top-of-the-line Ultimate trim.

Another great safety feature is the “multi-view camera system.” It creates a bird’s-eye view of the Santa Fe Sport and its surroundings, helping you squeeze into tight parking spots without damaging your car or anything else. A simple backup camera is standard equipment, but we love the more advanced system.

The 2018 Hyundai Santa Fe Sport most directly competes with the Chevrolet Equinox, GMC Terrain, and Jeep Cherokee, which are also compact models that don’t feel tiny. The Equinox and Terrain offer superior fuel economy, and the Cherokee adds hardy off-road capability, but all three are more expensive than the Santa Fe Sport.

This Hyundai is also a credible alternative to the roomier and posher Ford Edge and Nissan Murano mid-size crossovers. They’re more spacious, ride more smoothly, and have more luxurious cabins, but the Santa Fe Sport doesn’t feel far behind despite costing many thousands less. And for about the price of a Honda CR-V or Nissan Rogue, it offers the solidity of a heavier vehicle, though without maximum fuel efficiency or cargo volume. And against any of these competitors, the Santa Fe Sport suffers from its sparse availability of important safety gear. But by offering the refinement and driving experience of a decent mid-size crossover at the price of a compact model, the Santa Fe Sport secures itself a valuable niche. 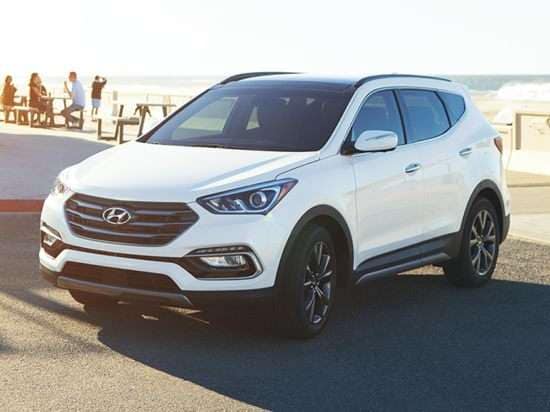