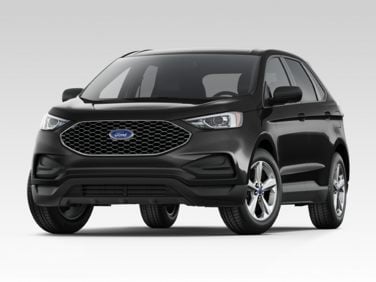 All About Ford Edge

The Ford Edge is a four-door, five-passenger compact crossover. The Ford Edge is manufactured in Oakville, Ontario, Canada alongside the Ford Flex, Lincoln MKX and a future full-size crossover, the Lincoln MKT. Ford has completely removed any of the last vestiges of the minivan from their product lineup. Like many automakers, the company has decided to replace this type of vehicle with crossovers, which straddle the line between SUV’s and cars. The idea is that by providing the usefulness of a sport-utility vehicle in combination with the driving characteristics of an automobile, the end result will be superior to what buyers are used to getting from a minivan.

The Edge is one of Ford’s newest crossover vehicles, and it shares one of the better platforms in the company with such luminaries as the Ford Fusion and the Lincoln MKZ. The Fusion influence is visible almost right away, with the large upright bars of the grille strongly reminiscent of the Fusion’s front clip. However, the Edge adopts a brawnier aesthetic than the passenger sedan, with flared fenders and a powerfully sloping roofline that ends with a diagonal jag before flattening out to form the rear hatch. The Edge rides high off the ground, but doesn’t tower above the competition, providing a nice balance between visibility and ease of entry.

The Edge is divided into the SE, the SEL and the Limited models. There is only one engine and transmission choice available in each: a 3.5 liter V6 which makes 265 horsepower and 253 lb-ft of torque, harnessed to a 6-speed automatic transmission. Front-wheel drive is standard, and all-wheel drive is an option for every version of the Edge. What sets the different models apart is standard equipment, with the base SE sporting cloth seats, power locks and windows, keyless entry and 17-inch wheels. The SEL improves on this by adding a vehicle information center, the option of a heated leather-seat premium package which also includes dual-climate controls, and a 6 CD changer. The Limited comes standard with leather, the Ford Sync media system (optional on the SE and SEL), parking assist and enormous optional 20-inch wheels. A towing package and dual sunroof round out the goodies on the Limited's options list.

From a driving perspective, the all-wheel drive Edge is a pleasure to navigate, given the fully independent suspension and relatively light weight which help to make it more agile than most truck-based SUV’s. The vehicle has excellent stability despite its relatively high center of gravity, and anti-lock brakes, AdvanceTrac electronic stability control and traction control are featured in each of the Edge’s trim levels. The interior of the Edge is a comfortable place to be, and adults will have no trouble spending a lengthy amount of time in the rear seats. The available almost full-length dual glass sunroof also makes an excellent canopy for starlight driving.

The Edge is a definite improvement over any minivan that was previously in the Ford lineup, and it also compares well against the current batch of compact crossovers. The Edge feels much larger than it really is, which not only helps with passenger comfort, but it also contributes to a feeling of security for the driver. While this crossover might be more at home on the expressway than off-road, this will be fine with the majority of buyers who will never ask the Edge to do anything more demanding than carry a car load of hockey players through the occasional snowstorm.

The 2009 Ford Edge is a carryover from 2008. There are five different trims offered on the Edge: the SE, the SEL, the luxury-oriented Limited and the new for 2009 Sport, which adds suede leather, a unique appearance package and 20-inch wheels. Each of these trims makes use of the same 3.5 liter V6 engine that produces 265 horsepower and 250 lb-ft of torque. A 6-speed automatic transmission handles gear shifts. The front-wheel drive Edge sees 17 miles per gallon in the city and 24 miles per gallon on the highway. All-wheel drive is also an option, and it drops fuel economy to 15 miles per gallon in town and 22 miles per gallon in highway cruising.