The 2015 Volkswagen Golf R seems poised to break out of its niche status as the preferred performance ride of dedicated VW fanatics and assume a larger role for the German brand. If ever there was a version of Volkswagen’s mightiest Golf to engage the masses, it’s the all-new R, what with its lighter, larger, and more nimble MQB platform underneath and its sporty, yet not over-the-top styling on the outside. Consider, too, its turbocharged four-cylinder engine and standard all-wheel drive, a combination that’s not front-heavy nor overly thirsty like past iterations of VW’s ultimate hot hatch formula.

2015 could very well be the coming out party for Volkswagen in the top-tier compact performance niche, a chance to leap from past rivals like the Subaru WRX STI and snag would-be buyers of more expensive fare like the Mercedes-Benz GLA45 AMG. I spent a day behind the wheel of the redesigned Volkswagen Golf R to try and assess just how serious a player the new model is destined to be.

The Golf GTI is already an exceptionally popular version of Volkswagen’s best-selling American nameplate, and the 2015 Golf R builds on the foundation of that car in creating the automaker’s final word on compact performance. It all starts under the hood, where a much-enhanced version of the GTI’s 2.0-liter, turbocharged engine pumps out 292 horsepower and 280 lb-ft of torque – a boost of 82 ponies compared to the more affordable version of the car, and 36 horses more than were available in the previous-generation Golf R. Torque is up too, although more modestly over the GTI (and 37 lb-ft greater than the now-departed Golf R), with a redesigned cylinder head, pistons, and more robust turbocharger claiming responsibility for the spike in output.

Aiding and abetting the Volkswagen Golf R’s quest for street supremacy is an all-wheel drive system, a Haldex-based design that can’t be found anywhere else in the hatchback Golf family. When paired with the car’s six-speed dual-clutch automated manual transmission, the setup rockets the Golf R to 60-mph from a standing start in just 4.9 seconds. If you opt for a six-speed manual tranny – and you’ll have to wait until the 2016 model year version of the car arrives later this summer to do so – you’ll have to forsake launch control and be satisfied with adding nearly a half-second to that metric.

A Tale Of Two Transmissions

A Tale Of Two Transmissions

Volkswagen assembled a fleet of both DSG-equipped cars and Euro-spec manual models for us to flog through the hills surrounding the historic San Julian region. With plenty of curves and climbs on hand to wring out the 2015 Volkswagen Golf R’s chassis and drivetrain, by the end of the day there were few secrets left concealed under the sleek hatchback’s sheet metal skin.

As with most Volkswagen products, the dual-clutch gearbox proved to be quicker off the line not just on paper, but also in the real world: launch control allowed for flawless, grin-inducing, and repeatable acceleration runs that the traditional six-speed just couldn’t muster, as the latter’s clutch (tuned for Continental sensibilities, I was told) was difficult to meter and often bogged. Driver engagement, however, was a different story: while both transmissions were remarkably quick once underway, there’s no visceral comparison between flipping paddles and ratcheting through the gears with your right hand in the Golf R. The manual transmission’s tough launches aside, the presence of a foot-operated clutch also helped avoid the hesitation when cruising at low speeds that is a common characteristic of VW’s DSG-equipped cars.

The Volkswagen Golf R’s 4MOTION all-wheel drive system disconnects the rear wheels during normal cruising, but as I discovered when pushing the car very much too fast through challenging corners, its ability to quickly enlist the aid of the back axle via a multi-plate clutch left nothing to be desired dynamically. I was also startled by the Golf R’s genuine lack of understeer, an attribute that is made possible in part by what VW calls its ‘XDS+’ brake-based limited slip system for the front wheels. Indeed, unless I purposely got the car out of shape the R was content to pivot sharply and even gracefully drag its tail through the curves.

It certainly doesn’t hurt the Golf R’s handling that it also features the most aggressive suspension hardware in the Golf portfolio. Sitting a tad lower than the GTI, the R benefits from enhanced lower control arms and rear bushings, along with the choice between 18 and 19-inch rims wrapped in summer rubber. The brand’s ‘DCC’ adaptive shocks are also available on the priciest Golf R trim level, featuring a new ‘Race’ mode that stiffens things up as much as possible, and for the first time in recent memory it’s possible to completely disable stability and traction control in the car (a feature that is most useful in a track environment). Rounding things out are a set of 13.4-inch brake rotors up front, which, like the 12.2-inchers at the rear are borrowed from the GTI Performance package. Hoonigans will be disappointed to learn that the parking brake is sadly electronic.

Picking the 2015 Volkswagen Golf R out in traffic will be relatively easy for enthusiasts, thanks to the presence of quad exhaust tips at the rear of the car, unique rims, and a subtle body kit that includes new side skirts and revised bumpers all around. Everyone else, however, will no doubt fail to see much of a visual split between the Golf R and the GTI, which I feel reflects the maturity that has always been a characteristic of the Golf in comparison to other compact performance cars. The Golf R’s passenger compartment features leather sports seats embossed with the letter ‘R,’ but other than that there are very few clues that you are riding in something special, as not even a boost gauge graces the Volkswagen’s instrument cluster.

The biggest stumbling block facing the 2015 Volkswagen Golf R’s shot at mainstream acceptance is pricing. The most affordable version of the R starts at $36,595, which is roughly $12k more than an entry-level GTI. While there is a significant equipment differential to take into account here (the Golf R offers standard leather, HID headlights, LED lighting up front, power adjustments for the driver’s bucket, dual-zone automatic climate control, satellite radio, and push-button start), if you want to sample the best-kitted version of the R you’ll have to pony up even more: $39,090 for the DCC & Navigation trim, which also includes an upgraded audio system.

It’s clear that the Volkswagen Golf R stretches out a sizable performance gap ahead of the GTI, but I have my doubts that the dollar amount associated with that gap is worth $12,000. In addition, if the Golf R’s drivetrain specs sound familiar to you, that’s because you’ve heard them before (albeit minus the manual gearbox) in discussion of the mechanically-identical Audi S3 sedan, which retails for just over $40k. Indeed, broadening the scope of your fun-to-drive vehicle search past the world of all-wheel drive hatchbacks reveals several vehicles – such as the previously-mentioned WRX STI, as well as the Ford Mustang, the Ford Focus ST, and the MINI Cooper John Cooper Works – at similar, or even cheaper, price points.

If you’re looking for the best all-around version of the Golf, however, the R is it. In many ways, the R feels like a natural evolution of the GTI both in spirit and on-road demeanor, and the all-weather capability of its all-wheel drive system and the very practical nature of its hatchback design (all Golf Rs are found in four door trim) are huge points in its favor. Just make sure that ‘the best Golf money can buy’ is your primary criteria at buying time, or you might find yourself equally charmed by the Volkswagen’s plethora of larger, faster, or less expensive alternatives. 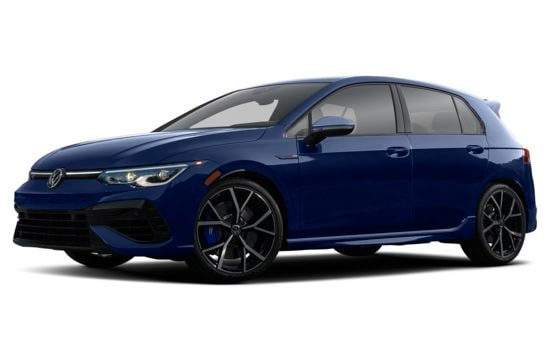