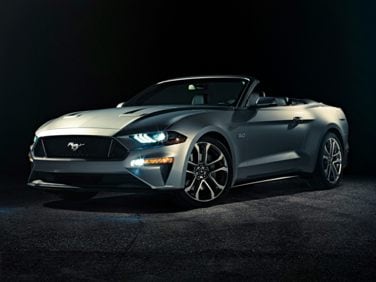 All About Ford Mustang

The Ford Mustang is a two-door, 2+2 compact coupe and a two-door, four-passenger compact convertible. The Ford Mustang is one of the most iconic cars to ever roll out of Detroit. Released in 1964 as a mid-year vehicle, the Mustang ushered in the wave of ‘pony’ cars which would sweep across America over the course of the next ten years. The Mustang initially started out as basic, affordable and economical transportation, but soon evolved into a popular performance platform that soldiered on through the 80’s and into the 90’s as one of Ford’s best-selling vehicles.

After the turn of the millennium and the demise of their primary competition, the Chevrolet Camaro, Ford turned its attentions towards a re-design of their popular muscle machine. They decided to head back into their history to mine some of the styling that made the Mustang such an instant hit. The end result was the 2005 Mustang, which borrowed from the past and partnered with modern engineering in order to create one of the most attractive and capable Mustangs to date.

For 2008, the Mustang is largely unchanged. Both a convertible and a coupe version of the vehicle are available, as are a special edition Bullit Mustang built to commemorate the classic film and car chase, and of course the requisite Shelby high performance version of the car, the Shelby GT500.

The coupe and convertible come with one of two engine choices. The first is a 210 horsepower V6 engine which also pounds out 240 lb-ft of torque. This is the most powerful V6 to ever be offered in the Mustang, and since the majority of Mustangs sold are outfitted with the base engine, it was a smart move on the part of Ford engineers to wring out every last bit of performance that they could from this 4.0 liter power plant. Stepping up to the Mustang GT allows buyers to sample a 3-valve, 4.6 liter overhead cam V8 that generates 300 horsepower and 320 lb-ft of torque. The aggressive exhaust note and feisty acceleration of this engine fits in well with the image most people associate with the Mustang, and the vehicle is a solid drag strip competitor. Both engines can be had with either a 5-speed manual or 5-speed automatic transmission.

The base Mustang coupe is priced right around $20,000 and comes with a nice range of features – power door locks and windows, air conditioning and cruise control. The interior is fairly devoid of any luxury, and the steel wheels and hubcaps somewhat detract from the experience. It is possible to order upgrade packages which both dress up the interior and provide nicer wheels. The Mustang GT comes with a sportier exterior appearance, and a nicer interior with optional leather seats and a better sound system. The convertible can be ordered with the same options. Once again, while the inside of the car is reminiscent of the circular gauges and interior appointments of days gone by, there is nothing in the Mustang’s passenger compartment which would ever cause it to be confused with a European luxury car.

Of course, that is beside the point. Most people buy the Mustang for one of two reasons – they enjoy the base model’s attractively priced good looks and reasonable performance, or they are looking for the pure visceral thrill of driving the GT. In these two respects, the 2008 Ford Mustang does not disappoint.

The 2009 Ford Mustang is a carryover from 2008. The 2009 Mustang offers an extended range of trim levels and two different body styles: a coupe and a convertible. The Mustang V6 coupe is also available as a convertible, with a Premium trim level for both. The coupe can additionally be ordered with the Pony Package trim. The vehicle is powered by a 4.0 liter 6-cylinder engine that produces 210 horsepower and 240 lb-ft of torque. Fuel economy is rated at 17 miles per gallon in the city and 26 miles per gallon on the highway when equipped with the standard 5-speed manual transmission. A 5-speed automatic is available as an option.

The Mustang GT coupe is also available in Premium trim, as is the convertible, which further adds an exclusive GT California Special trim. These five editions of the automobile make use of a 300 horsepower, 4.6 liter V8 that pounds out 320 lb-ft of torque. A 5-speed manual is provided as standard equipment, while a 5-speed automatic can also be ordered. The manual version of the car turns in fuel mileage of 15 miles per gallon in the city and 23 miles per gallon on the highway. The Mustang coupe can also be ordered in Bullit trim, which adds 15 horsepower to the V8 engine and upgrades the vehicle’s suspension.