The 2016 Toyota Avalon is one of the Japanese automaker's sleeper flagships, standing alongside the significantly-pricier Land Cruiser SUV as the full-size personification of the brand. Although it might not get much press, the Avalon has actually been one of Toyota's success stories of the past few years, as the decision to spice up its looks without losing its smooth, comfortable character more than doubled its sales when it was last completely redesigned in 2013.

Three years later there haven't been more than a few tweaks made to the Avalon's winning formula, but that doesn't mean that the four-door sedan has fallen behind its rivals. After driving Toyota's recently refreshed cruiser, I can easily see why it continues to pull big profits for a company that has become one of the leading lights of the big comfy car class.

It took Toyota many years of fumbling before it could find a look for the Avalon that didn't doom it as a chariot for retired boomers, and it's only natural that the company's designers didn't want to make wholesale changes to the sedan's universally-lauded styling. The new front bumper on the 2016 Toyota Avalon is about as dramatic as things get, with a re-sculpt that doesn't so much subvert the gaping maw found on the previous year's model as invert it (or, at least, give it a little more catfish). You'll also notice that the car's fog lights are now missing, replaced by trend-du-jour LED lights in a vertical strip that cuts into the bumper just ahead of the fender, and that the car's tail lights and back bumper have undergone more subtle updates of their own. Sleeker than it was, the new Avalon is conservative enough not to upset existing buyers but doesn't threaten to put you to sleep should one sidle up beside you at a stoplight.

The 2016 Toyota Avalon's cabin has been pulled almost directly out of the Lexus playbook - with a few key differences. One is that you're not saddled with the awkward Enform infotainment interface, which means no 'mouse' or touchpad on the center console (more on the Avalon's infotainment below). The other is that it's clear that Toyota isn't trying to make a strong styling statement with the sedan's passenger compartment, with emphasis shifting instead to comfort and ease-of-use.

I drove both Touring and top-tier Limited models, each of which was loaded with pleasingly soft leather upholstery on every surface where my hands, legs, or torso might touch. Gauges are big and bright, and Toyota has stuck with the same touch panel on the dash to control almost every aspect of its climate and entertainment systems, a decision that looks great but lacks the tactile feedback that some older customers might be looking for. It's also more difficult to use in the winter time without taking off your gloves, a fact that the Avalon at least acknowledges by giving physical knobs to the seat heating (and cooling) function.

Inner space has always been something that the Avalon has done well, and the 2016 model is no exception. There's zero change in the size of the sedan which means both front and rear occupants are swimming in space, with even taller riders fully accommodated by the cavernous confines of the car's back seat. An equally-generous trunk is on-hand to ensure that should you load the Toyota up with five passengers you'll still have room for each and ever person's luggage. Get everyone to pipe down for a few moments and listen closely, and you won't hear the biggest difference between the new interior and the old one: more sound deadening has reduced road noise appreciably at speed.

New Entune Infotainment System, but Most Other Gear Is Status Quo

New Entune Infotainment System, but Most Other Gear Is Status Quo

The 2016 Toyota Avalon benefits from the same Entune push that's happening across most of the Toyota line-up, with three versions of this touchscreen interface now available with the car. I only had the chance to test out the Premium Audio iteration, which comes bundled with navigation and can be further enhanced with JBL speakers. It's a decent-sounding setup, and while I was occasionally frustrated by the logic used by Entune to scroll through radio presets, most people will have no issues getting comfortable with the system itself.

As befitting its almost-but-not-quite luxury car status, the Avalon's features list remains robust for 2016. Several different levels of power adjustment are available with the car depending on trim level (there are five in total: XLE, XLE Plus, XLE Premium, Touring, and Limited, with XLE Plus new for this year), and a standard backup camera, an available sunshade, and even features such as adaptive cruise control and tri-zone automatic climate control can be found on the order sheet.

Engine Stays the Same, Too

Engine Stays the Same, Too

The 2016 Toyota Avalon's drivetrain doesn't hold any surprises, which is to say the same stout V-6 continues to hold court under the car's hood. This is good news considering that it provides 268 horsepower and 248 lb-ft of torque, which is more than enough to get the full-size four-door moving with authority. A six-speed automatic transmission is standard, and the car offers eco and sport-oriented drive modes that impact throttle sharpness as well as steering feel.

Those surfing the numbers prior to making a purchase decision will note that the Avalon falls behind almost every other car in its class when it comes to total engine output, including the newly-redesigned Maxima as well as the V-6 editions of the Ford Taurus, the Chevrolet Impala, and the Dodge Charger. Fortunately for Toyota bench racing is largely irrelevant for its target customers, who are more concerned with smooth delivery of available power than they are with quarter mile times. I had no complaints about the Avalon's 3.5-liter mill during my time behind the wheel, and in fact found it more lively than I had initially expected given the car's staid reputation. Another bonus: fuel mileage is listed at 21-mpg in stop and go driving and 31-mpg on the highway, which is respectable for such a large automobile.

That the Toyota Avalon delivers a relatively soft ride should surprise no one given its market position, but for 2016 the automaker's engineers have essentially replaced the car's shocks and springs with a down comforter. Unless you opt for the Touring trim level, you'll be treated to a revamped suspension setup that virtually erases rough roads to the point where you begin to question whether Toyota's installed some type of hovercar technology under the chassis.

It's not an unpleasant experience - the disconnect is more from the unpleasantries of the road rather than the asphalt in its entirety - and I don't think anyone buying an Avalon expects anything less. For those who dare, the Avalon Touring will toast your marshmallow just a little longer by way of its stiffer setup, but just like every other car in its class this Toyota is no sports sedan and shouldn’t be judged by criteria it was never built to meet.

Safety Tech Lags, but Only Just

Safety Tech Lags, but Only Just

Aside from the general rule of thumb that big cars are safer than smaller ones, the 2016 Toyota Avalon offers very good passenger protection in the event of an accident, what with 10 airbags stuffed into its various interior panels as well as standard stability control, traction control, and a host of braking assistance features offered with every car. When it comes to advanced safety gear, however, the Avalon isn't quite as comprehensive.

Yes, you get access to the option of a blind spot monitoring system, as well as a forward collision warning feature and a partial brake-assist should the car sense an impact that you haven't responded to quickly enough. There's no lane departure warning or lane keeping assistance, however, nor does the vehicle offer the same kind of top-down camera system when parking that has become more popular amongst other full-size sedans. The tech gap isn't huge between the Avalon and its rivals, but it's worth noting given the proliferation of this type of protective equipment.

There's a Hybrid, If You Are so Inclined

There's a Hybrid, If You Are so Inclined

31-mpg is nothing to sneer at from a large sedan, but if you're inclined to seek out the most frugal full-size in its segment then look no further than the 2016 Toyota Avalon Hybrid. Available in three trim levels - XLE Plus, XLE Premium, and Limited - the Avalon Hybrid swaps out its V-6 for a 2.5-liter, four-cylinder engine that works together with a single electric motor to produce 200 horsepower. I didn't have the chance to drive the Avalon Hybrid, so I can only assume that it's slower, but chances are you'll care more about the car's 40-mpg city and 39-mpg highway than its 0-60-mph time. Adding 19-mpg to a brute like the Avalon is impressive, although I question just how many hybrid fans dip their toes into the big car market.

Why Buy a Lexus?

Why Buy a Lexus?

The 2016 Toyota Avalon starts at an MSRP of $32,650, and if you stick with the gas model climbs to a plateau of $40,450 for the Limited. Zip on over to your local Lexus dealer and you'll quickly discover that it'll cost you $38k just to get behind the wheel of an entry-level ES 350 sedan - a car that's not nearly as large, or plush, as the Avalon Limited.

I can understand that some buyers might not want to park a car as hefty as the Toyota Avalon in their driveway, and that for others the badge on the front is worth more than words like 'value' or 'bargain.' Still, for $40k the Avalon offers you a whole lot of car, with features you'll have trouble finding on comparably-priced Lexus, Buick, and Acura models. It's a stealth-luxury solution for practical-minded shoppers, and it's a strategy that Toyota has leveraged almost perfectly in hoovering up this choosy demographic.

Cons:
•    Not as focused on the road as some rivals
•    Power specs fall short of competitors
•    No badge recognition
•    Would prefer buttons to touch surfaces for controlling radio and climate 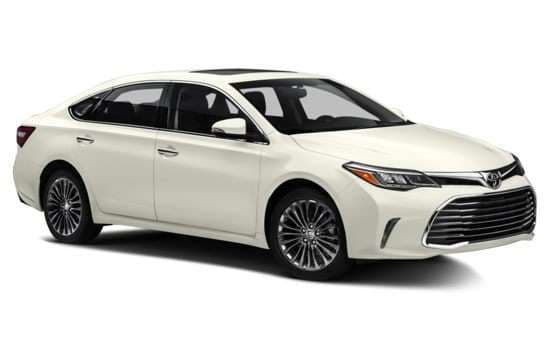