10 Things You Need to Know About the 2019 Porsche Cayenne

sport utility vehicles used to go heavy on the utility side of things. They were great for hauling the family or cargo and doing a little off-road adventuring, but they weren’t exactly sporty. These days, the focus is shifting to building genuinely sporty SUVs that are fun to sling through the corners.

Porsche is a brand known for building performance cars, so when it builds an SUV, it needs to uphold that reputation. The 2019 Cayenne does exactly that with style, utility, and performance in one attractive package. Here are 10 things to know about the 2019 Porsche Cayenne.

1) This is the third generation of the Cayenne.

1) This is the third generation of the Cayenne.

The Porsche Cayenne debuted in 2002, bringing a dose of sportiness to SUVs at a time when they were focused on carrying the family and cargo rather than trying to be performance vehicles. There was plenty of skepticism about whether Porsche could make an SUV that delivered a true Porsche driving experience. The Cayenne has now sold over 770,000 units worldwide and established the market for an entirely new kind of SUV.

It’s been 17 years since that first Cayenne and there’s now competition from the likes of Bentley, Lamborghini, and Rolls-Royce, but the Cayenne doesn’t forget its original mission. It still delivers a true performance experience packaged in a capable, luxurious SUV for people who like to drive.

2) There are plenty of engines, but no diesel option.

2) There are plenty of engines, but no diesel option.

There’s also the Cayenne E-Hybrid with the 3.0-liter turbocharged V6 paired up with an electric motor. Together they have 455 combined system horsepower with 516 lb-ft of torque. The Porsche Cayenne is a true performance SUV in any guise.

3) The Cayenne is one fast SUV.

3) The Cayenne is one fast SUV.

Add the Sport Chrono Package to any of those trims and drop 0.2 to 0.3 seconds off your times depending on the trim. The E-Hybrid is also quick with a 0-60 mph time of 4.7 seconds and a top speed of 157 mph.

The less a vehicle weighs, the better its fuel economy and the better it handles. No one wants to drive an overweight, top-heavy SUV. The Cayenne, like Porche's 911 and Panamera, now uses a combination of materials including steel and alloys with the exterior made entirely of aluminum. The floorpan assembly and most of the chassis components are also made from an alloy.

Porsche sought weight savings anywhere it could, including the starter battery. This battery weighs roughly 22 pounds less than the old one. Overall, the Cayenne lost around 121 pounds, making it more fuel-efficient and improving its handling. This is particularly impressive given the Cayenne has more standard equipment, which added weight to the vehicle.

5) There's quite a pricing spread.

5) There's quite a pricing spread.

Starting price for the base Cayenne is $65,700. While this isn’t by any means a budget vehicle, those who think of Porsches as being only six-figure vehicles will be happy to know base models have a more modest price. The Cayenne S jumps to $82,900, making it harder to reach for the average budget.

The Cayenne Turbo takes another leap with pricing that starts at $124,600. That’s nearly double the base Cayenne, but for the price you get a significantly more powerful SUV. Those who want the fuel efficiency and reduced environmental impact of the E-Hybrid will be happy to know it sits far lower on the price spectrum than the Turbo. It comes in at $79,900.

The Cayenne features the world premiere of optional Porsche Surface Coated Brakes. These high-performance brakes are available across the lineup as long as you've selected the 21-inch wheels. They feature a cast-iron disc with a tungsten-carbide coating that increases friction while reducing wear and brake dust. They’re exclusive to Porsche, so you won’t find them on vehicles from other automakers.

They also have a unique look that makes Cayennes equipped with Porsche Surface Coated Brakes stand out from the rest of the lineup. It starts with calipers that are painted white. There’s also the surface of the discs, which develop a gloss over the break-in period.

7) There is plenty of room for five passengers and cargo.

7) There is plenty of room for five passengers and cargo.

The Cayenne has two rows with seating for up to five passengers. You won’t feel like you’re squished with three adults in the rear seats and two will find it downright expansive. If you’re looking for something a little smaller — and cheaper — then there’s the Porsche Macan to consider. The Cayenne has seats with moderate bolstering suited to a leisurely drive or a spirited excursion. Porsche aimed for the middle with seating comfort rather than going too far toward sporty.

When you're thinking about cargo rather than people, the Cayenne still has you covered. There’s 27.2 cubic feet behind the rear seat, or you can fold the 40/20/40 split-folding seatbacks down for up to 60.3 cubic feet for cargo.

8) Rear-axle steering is available for the first time.

8) Rear-axle steering is available for the first time.

The Cayenne now features optional electric rear-axle steering for the first time. Although new to the Cayenne, Porsche already uses this on both the 911 and Panamera. It has the benefit of improving both everyday driving and performance driving. At low speeds, it steers the rear wheels in the opposite direction of the front wheels. This reduces the turning radius, makes it easier to park in smaller spots, and increases agility.

At high speeds, rear-axle steering steers the rear wheels in the same direction as the front wheels. This provides better stability for high-speed maneuvering and offers better performance handling. An optional adaptive air suspension further enhances the Cayenne’s ability to handle a variety of road conditions.

9) There are three different audio systems.

9) There are three different audio systems.

There are three audio systems, with even the base system providing rich sound. The standard Sound Package Plus features 10 speakers with 150 watts of power. Next is a Bose surround sound system with 14 amplifier channels, 710 watts of power, and 14 speakers including a separate subwoofer. It features Bose SoundTrue technology, which improves the audio quality when listening to compressed file formats like MP3.

The top audio system is a Burmester high-end 3D surround sound system. It has 1455 watts of power and 21 speakers, including a subwoofer with a 400-watt class D amplifier and air motion transformer tweeters that ensure optimal high-frequency sound. The system creates an impressive 3D sound experience and blends into the overall vehicle design aesthetic.

10) There are three headlight choices, too.

10) There are three headlight choices, too.

There are three available headlight options for the new Cayenne. LED headlights are standard on every Cayenne across the trim range. One step up is the Porsche Dynamic Light System, which offers several lighting modes including cornering lighting.

Your final option includes LED main headlights with matrix beam. These lights offer variable light distribution and intensity through a series of 84 individually activated light-emitting diodes. The benefit to this system is reduced high beam glare for oncoming cars and reduced glare from reflective signs facing the driver. 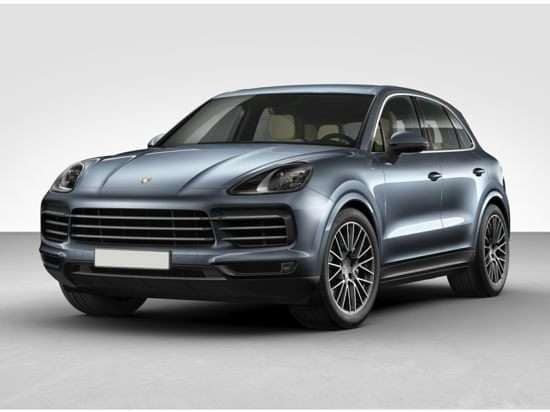