A three-row luxury sport utility vehicle is the holy grail of segments for automakers that play in the class occupied by the well-heeled. The vehicles are stylish, make a statement, and cost lots of money, which means folks like driving them and being seen in them. One of the kings of this category is the Mercedes-Benz GL-Class, and it’s now brand new for 2013.

This is the second generation of the full-size family hauler from this German automaker. They say you can’t mess with success, and Mercedes certainly hasn’t done anything to knock down its best-in-class seller. In fact, it’s only gotten much much better.

For 2013, Mercedes is offering the GL-Class in a variety of trims, including a brand-new high-performance variant from the AMG side of the family. The least expensive way into the GL lineup is by way of the GL350 BlueTEC, which starts at $62,400. Just a bit more nets you the GL450 with its MSRP of $63,900. If you desire more power from a larger engine, you can opt for the $86,900 GL550. If you’re a lunatic for ludicrous speed, there’s always brand-new GL63 AMG. That full-size hot rod starts at $116,925.

All four are equipped with the 4MATIC all-wheel-drive system, as well as a seven-speed automatic transmission.

Mercedes-Benz eyes its competitors with careful aim, and it considers the Cadillac Escalade and Land Rover Range Rover to be its top foes. We’d include the Cadillac as well, but nix the Range Rover because it’s not a three-row vehicle. Instead, we’d add the likes of the 2013 Audi Q7 and the Infiniti QX56. You could also throw in the Lexus GX 460, but that’s the underdog of the group thanks to having “only” 301 horsepower and the slowest time from 0-60 miles per hour at a few ticks under eight seconds. (Though, to be fair, it’s also seven thousand dollars cheaper than the nearest competitor.)

It’s not always about power and performance though, as someone seeking out a full-size SUV wants to know how much they can cram inside their vehicle. Be it people or cargo, the Benz runs in the middle of the pack. It offers up more space than the Audi Q7 and Infiniti QX56, but falls far behind the available space inside the Escalade. Of course, that Cadillac starts $5,000 higher than the Mercedes. Additionally, the Mercedes feels nicer inside than the Escalade… in fact, it’s got the nicest interior of the entire group, and a host of top notch entertainment and safety features as standard kit.

The changes to the exterior of the second generation GL-Class are not drastic ones. That’s not to say they’re not successful ones though, as the entire aesthetic feels ever slightly more mature. That’s a perfect way for a vehicle in this segment to grow.

The headlamps have been refined, and the daytime running LED strips below them shine brilliantly in any light. The large nose boasts the familiar pointed star, and the lines work their way back from there. Eventually, the eye moves towards the rear haunch, which is both pronounced and muscular. Finally, the lines wrap around the back of the GL, where large taillamps blend with a chrome strip to produce a clean exterior style. It’s simple yet elegant, and works quit well on the GL-Class.

The interior of nearly any new Mercedes presents a duality of comfort and luxury. This happens at the lower end of the family tree, but it happens with a touch more of each factor as you climb the product ladder. The GL-Class is no exception as its cabin is filled with wood, leather, and occasional bits of metal that all work together to exude a level of style and sophistication that any Mercedes-Benz buyer or owner expects to find in their vehicle.

Heated power-front seats greet both the driver and passenger, as does a large dose of real wood. There’s no plastic fantastic here, as real trees gave their life to make you happy… and it works,because that’s what happens when you jump behind the wheel of the GL-Class.

Second and third row passengers should be happy as well, because those seats were built with actual full-size human beings in mind. Yes, even in the third row can you fit a real-life adult person. Should you not need those rear seats, they can be stowed with the simple push of a button.

Central to the interior is the telematics system, which is called COMAND, because spelling it COMMAND would have required an extra M that the company didn’t want to splurge on. No matter, because the system works simply, and that’s all that can be asked of a modern infotainment system. All of the entertainment, navigation, and general information are easily accessed with just a few presses of a button or the control knob mounted ahead of the armrest.

Mercedes-Benz offers up quite a few choices for those looking at putting the 2013 GL-Class in their garage. The “entry-level” vehicle is the diesel-powered GL350, which houses a 3.0-liter turbocharged V6 that produces 240 horsepower. The reason we put “entry-level” in quotes, however, is because it’s much more than that thanks to the 455 pound-feet of torque that are available from 1,600 rpm up through 2,400.

Next up the GL food chain is the GL450 with its 4.6-liter twin-turbocharged V8 engine. This mill pumps out a rather impressive 362 horsepower and an even more impressive 406 pound-feet of torque that’s offered up from between 1,500 and 4,000 rpm.

Need more go? The GL550 is powered by the same engine as the GL450, but it’s been reworked to produce a gargantuan 429 horsepower and 516 pound-feet of torque. Not impressed with that? The GL63 AMG is rocketed forth courtesy of a 5.5-liter twin-turbocharged V8 engine, which is good for 550 horsepower and 560 pound-feet of torque. Say good-bye to everyone else at the stop light, and also say good-bye to your tires and fuel.

The GL350 can hit 24 miles per gallon on the highway, while the GL450 drops down to 19 MPG and the GL550 a bit further to 18 MPG highway. The AMG? It’s simply listed as TBD on the Mercedes-Benz media website.

As much as you think of Mercedes-Benz as being a brand committed to luxury cars, you should also think of them as having a passion for cutting-edge safety systems. The 2013 GL-Class is fitted with a system called Collision Prevention Assist, which monitors the distance between the GL and vehicles and stationary objects in front of the GL. This is done via a RADAR system, and if the GL detects that there is a risk of a collision, the driver is warned with a loud audible beep. If the driver ignores that beep, than the brakes will be applied to minimize the effects of the collision.

If the GL is actually going to crash, it’s equipped with another system that can help prevent injuries to the vehicles occupants. The Pre-Safe system detects the impending crash, and begins to work to help those inside the car. Seatbelts are tightened, and the front seats are automatically moved to a position that is safe for the driver and front passenger. Additionally, if the side windows are open the system will close them, and if a rollover is imminent than the sunroof is closed as well.

At this altitude, most vehicles start gasping for air and there’s just nothing there for them to help combust fuel into energy. A turbocharge helps here, as it forces more air into the engine, and it’s turning an otherwise harsh testing ground into a routine driving experience. We’re approaching the Taos ski resort in New Mexico, which sits nearly 10,000 feet above sea level… and the 2013 Mercedes-Benz GL350 is plugging forward like it’s no big deal.

Step on the gas at sea level, and it would surge forward like an NFL linebacker. Big, but with deft footing. Here at altitude, and it’s more like an extreme marathoner. It should be out of breath… but it’s not. Same goes for the other examples we sampled, the GL450 and GL550. Put the pedal to the floor, and the power is there. Just as smooth as the ride are the shifts from the seven-speed automatic gearbox. Shifts are imperceptible, and that’s expected of a vehicle in this class. We don’t want a CVT, we just want an automatic that is refined and up to the task.

Once the road gets a bit twisty, the 4MATIC all-wheel-drive keeps the action in line. Despite the 5,400+ pound curb weight, the GL never feels like an out-of-sorts heffer. It tracks clean and true, and it’s easy to control. That’s important when you consider that most of them will be filled with families. Just as clear as the handling, the brakes work effortlessly to haul down the speed and bring everything to a safe controllable stop.

Mercedes-Benz has delivered a product that simply works… very well.

Hopefully, when we get some seat time with the GL63 AMG we can report the same thing, but our early guess is that we can. It will be the same level of refinement… just propelled forward by a nearly nuclear V8 powerplant.

Mercedes-Benz owns the full-size three-row luxury SUV segment thanks to the last generation GL-Class. Now, the second generation is poised to carry the torch, and we can’t find a reason why it shouldn’t do just that. The engines have gotten better, the interior is just as good, and the exterior is more refined. The rest of the field is now forced to play catch-up with an even better product than before.

-Revised styling features simple changes that have big impacts.
-Engine range offers something for everyone.
-Level of safety technology is a step ahead of the rest of the class.

-Visibility is tough towards the rear three-quarter, but this is consistent across the segment.
-We wish the GL550 didn’t represent such an expensive leap over the GL450. 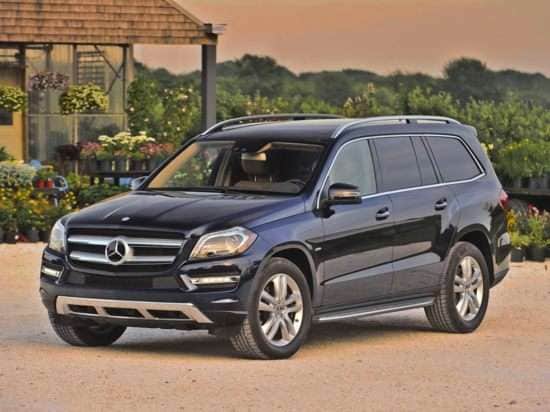