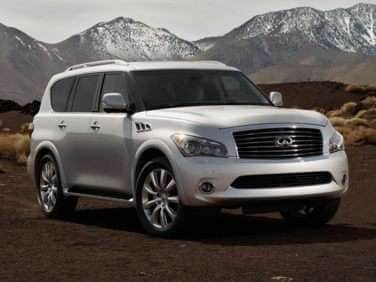 All About Infiniti QX56

The Infiniti QX56 is a four-door, up to eight passenger full-size luxury SUV. It has become de rigueur for luxury automakers to have their own enormous sport utility vehicles, and the Japanese have responded by adapting the large truck platforms of their parent-companies to meet the needs of a market which has gone crazy for size. One of the largest of this class of vehicle is the Infiniti QX56. Based on the same chassis as the epic Nissan Armada and the Titan pickup truck, the QX is a beast of an SUV, with a huge towing capacity and the street presence to match.

The 2008 QX56 has such large proportions that at first glance it almost resembles a small bus. Whereas some luxury SUV’s use sharp angles or extended platforms to achieve their size, the QX appears to have been inflated from within. The vehicle almost looks to be bursting at the seams, and combined with the large upright grille and curious greenhouse, this Infiniti cuts a unique profile.

There is only one engine choice available for the QX: a 5.6 liter V8 which produces 320 horsepower and an impressive 393 lb-ft of torque. A 5-speed automatic transmission sends power to the rear wheels in the base model, but this can be upgraded to multi-range 4-wheel drive. All of this power comes with a hefty price to pay at the gas pump, and the QX56 turns in a brutal 12 miles per gallon in city driving and 17 miles per gallon on the highway. However, the tradeoff in economy comes with the ability to tow 9,000 lbs, an impressive figure for a luxury SUV. An independent rear suspension contributes to above-average handling for such a large vehicle, although the QX will definitely protest if it is hurled through the corners a bit too quickly. Large anti-lock brakes and electronic stability control fight to keep the SUV shiny side up during sudden evasive maneuvers, and while few owners will take their QX56 on serious off-roading adventures, skid plates are installed underneath the vehicle to protect vital components.

Inside, the QX feels like a fortress, largely due to its gratuitous amount of passenger space. The vehicle seats seven, but unfortunately the comfort of third row passengers seems like it was an after thought, and so these seats are most useful folded into the rear floor to make room for more cargo - at the flick of a switch, of course. Interior materials feel like they come from the top of the heap, and the new Infiniti Controller, which uses a rotary device to help navigate entertainment system menus is simple to use. The long list of standard features includes every power accessory imaginable from windows to lift gate, along with Bluetooth and a hard drive based multimedia system that comes with a three-year satellite radio system.

The Infiniti QX56 is an impressive vehicle. If you need something extremely large and extremely comfortable, then this SUV deserves a serious look. If you are looking for something that won’t stand out in a crowd, then maybe you had better look elsewhere, because when you arrive at your destination in a vehicle like this, all eyes will be on you.

The 2009 Infiniti QX56 is a carryover from 2008. The 2009 QX is sold in a single trim, the QX56. The full-size SUV is motivated by a 320 horsepower, 5.6 liter V8 that also churns out an impressive 393 lb-ft of torque. A 5-speed automatic is the only transmission available. The QX56 can be ordered with either two or four-wheel drive, and fuel economy is rated at 12 miles per gallon in town and 18 miles per gallon on the highway.