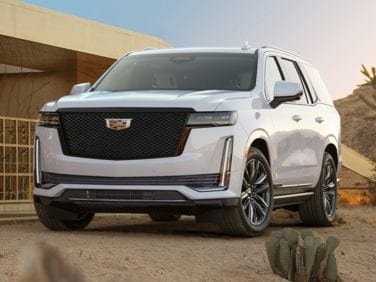 All About Cadillac Escalade

The Cadillac Escalade is a four-door, up to eight passenger luxury SUV, and a four-door, five passenger luxury pickup truck. When the Lincoln Navigator came out in 1998, it proved that there was a voracious market waiting to devour large luxury sport-utility vehicles. The Navigator was ostentatious, powerful and very comfortable, providing truck-like towing in combination with luxury sedan elegance. General Motors was taken somewhat by surprise, but still managed to counter with the Cadillac Escalade for the next model year. Initially, the Escalade was based on the already in production GMC Yukon Denali SUV, with slightly different bodywork which gave it a bulkier appearance. Over the next decade, the Escalade would evolve to include 3 separate body styles and a brand image which would steal the majority of Lincoln’s thunder – and customers.

The 2008 Cadillac Escalade is a fully featured, full-size SUV which cradles passengers in the lap of luxury while providing them with excellent towing and hauling capacity. There are three editions of the Escalade available. The original version of the truck is still available as a four-door which can seat up to 8 passengers, while the ESV retains the same seating capacity but provides increased interior space on a stretched wheelbase. The EXT version of the Escalade is a four-door pickup truck which provides the functionality of a cargo bed combined with all of the luxury features of the Escalade and Escalade ESV.

Each version of the truck is outfitted with a 6.2 liter V8 as standard equipment. Mated with a 6-speed automatic transmission, this engine produces 403 horsepower and 417 lb-ft of torque – enough for the base Escalade to tow up to 8,300 lbs. The ESV and EXT give up approximately 800 lbs in towing capacity to the smaller version of the vehicle. All versions of the truck are available with all-wheel drive. For ecologically conscious buyers who are concerned with the abysmal fuel mileage associated with such large SUV’s (12 miles per gallon in the city), there is a hybrid version of the truck available. In combination with a battery-powered electric motor which allows the Escalade to run exclusively on battery power at lower speeds, the 6.0 liter V8 increases in-town fuel mileage by 50%. While the savings at the pump are significant, there is a price to be paid in terms of reduced towing capacity: the hybrid Escalade can only pull 5,600 lbs.

The inside of these trucks can best be described as palatial, with large amounts of head, shoulder and leg room complemented by high-quality leather and trim materials. A number of electronic gadgets and entertainment systems are available to keep passengers entertained and drivers on-course. Escalade and Escalade ESV buyers can also opt for the Platinum edition of the vehicle, which provides LED headlights, magnetically-controlled suspension which can react to road conditions, and an upgraded, hand-assembled interior.

No matter which version of the Escalade a driver chooses, they can be assured of drawing attention. This truck has acquired a significant amount of appeal in popular culture, giving it a certain cachet in addition to its excellent utility and power. The Cadillac Escalade is firmly established as the premiere domestic luxury SUV on the road today.

The Escalade EXT model has been given an optional system that alerts the driver to blind zones. The E85 capability of the engine is also new. The engine is a Vortec 6.2 liter, V8 that features variable value timing. There is XM Satellite Radio available on the 2009 models with the NavTraffic system. This provides the driver with real-time traffic reports. A new standard in 2009 is a steering wheel with power tilt. There is also a new color combination for the interior called Light Cashmere/Cocoa.

The Escalade Platinum is a new addition in 2009. The Platinum has a grille pattern that was modeled after a sport sedan. It has exterior badge décor, 22-inch wheels, LED headlamps and it features the Magnetic Ride Control system. The interior of the Platinum features an instrument panel that has hand-stitched leather, a storage console in the center and French-seam door trim that has contrasting stitching. The first and second seat rows feature aniline leather and the steering wheel is heated

All Escalade models have been updated with FlexFuel capability, the “express-up” power window feature and Bluetooth capability with OnStar. The rearview camera is now standard rather than optional. The gross vehicle weight rating for the all-wheel drive models has jumped from 7,100 pounds to 7,300. For the two-wheel drive models, the change is from 7,000 pounds to 7,100. The DVD system has added TV screens on the back of each front headrest in addition to the roof screen that was already available.