Introduction
By Christian Wardlaw
Driving pleasure, the Mazda MX-5 Miata's elemental reason for existence, can be quantified in myriad ways. To Mazda, which single-handedly revived the roadster market 16 years ago when it introduced the original MX-5 Miata to the world, the Japanese notion of jinba ittai represents not only the essence of the globe's best-selling two-seat sports car, but of the brand as a whole. Every new Mazda strives to bring "rider and horse together as one," the literal translation of jinba ittai . The redesigned 2006 MX-5 Miata exemplifies this philosophy better than even the vaunted RX-8.

To ensure that the new MX-5 Miata embodied jinba ittai, Mazda engineers employed the tenets of Kansei engineering, the principles of which dictate that every aspect of design, mechanics, and dynamic response must ultimately contribute to driving satisfaction. Thus, despite larger dimensions, a bigger interior, improved safety, and additional features, the new 2006 Mazda MX-5 Miata weighs just 22 pounds more than the old car, which means that the base model should remain under 2,500 pounds.

That means the new MX-5 Miata will remain lightweight, lithe and lively - characteristics that made it a hit in the first place.

Since curb weight essentially unchanged, the 2006 Mazda MX-5 Miata's new 2.0-liter inline four-cylinder engine should have no trouble improving upon the performance of the old model. This twin-cam motor is equipped with variable valve timing and should develop about 160 horsepower at 6,700 rpm with a torque peak arriving at 5,000 rpm (final specs will be released closer to the car's arrival at dealerships). Mazda wanted this new engine to rev freely to redline, even past the torque peak, so intake restriction and exhaust backpressure have been reduced. Combined with a lighter flywheel, electronic throttle control, and a stiffer driveshaft, these improvements to the 2006 Mazda MX-5 Miata should make the roadster feel significantly quicker.

Power flows to the rear wheels through a standard short-throw, six-speed manual transmission equipped with triple-cone synchronizers that reduce engagement force in the first four forward gears. A six-speed automatic transmission is optional, and features a manual shift mode for greater driving involvement.

Like the original Miata, the redesigned 2006 version features a double-wishbone front suspension and a multi-link rear suspension, this time equipped with anti-dive and anti-squat geometry. The handsome multi-spoke 17-inch wheels are one size larger in diameter, and wear 205/45 performance tires. They front a four-wheel-disc braking system with larger rotors, stiffer calipers, and other modifications designed to produce short pedal travel and linear brake application. Mazda has also retuned the power rack-and-pinion steering, and when combined with the new MX-5 Miata's wider track, larger tires, and stiffer body structure, it produces quicker response and better handling.

In redesigning the iconic Mazda MX-5 Miata, engineers concentrated on stiffening the body structure, optimizing weight distribution, reducing the yaw moment of inertia, and maintaining a low center of gravity to create a car that truly delivers on the promise of jinba ittai.

Completely new from the tires to the top, the 2006 Mazda MX-5 Miata benefits from a 22-percent improvement in body flex and a 47-percent bump in torsional rigidity, which alone could substantially boost the Miata's light, lithe, and lively feel from behind the wheel. But Mazda also slid the engine 5.3 inches further back in the chassis, putting it well behind the front axle to achieve a perfect 50/50 front-to-rear weight distribution and a reduced yaw moment of inertia, which contributes to more stable and higher handling limits. And with a height bump of less than an inch, the new MX-5 Miata's center of gravity remains among the lowest on the market.

Longer and wider, the 2006 Mazda MX-5 Miata's wheelbase is stretched 2.6 inches, length is bumped less than an inch, width increases 1.6 inches, and height is nearly unchanged. The classic Miata "Coke-bottle" body shape that tucked inward between the wheels is traded for a wider cockpit and space for a new side-impact airbag system that protects both the torso and the head.

At both ends, the body tapers for a taut look, but the wheel flares are exaggerated to accommodate the 2006 Mazda MX-5 Miata's wider track, larger wheels, and to provide a familial link to the RX-8 sports car. Raised to meet new European pedestrian compatibility standards, the taller and flatter hood features grooved detail to mimic the old car's bubbled bonnet. At the back, the new MX-5 Miata sports twin exhaust outlets for a performance-oriented appearance.

Thanks to increased dimensions, the 2006 Mazda MX-5 Miata's cabin can accommodate taller and wider people in greater comfort. Hip, leg, and shoulder room are all improved, and there's more seat track travel than before. Mazda has also included an adjustable steering wheel to help bigger drivers find an optimal driving position.

Not only is the 2006 Mazda MX-5 Miata's cabin larger, it gets additional storage space for improved daily-driving utility. The glovebox is bigger, the door panels have bottle holders molded right in, and the rear bulkhead includes three storage compartments (two located behind the front seatbacks). Two cupholders are also located in the center console, and a coinholder is a new feature. The trunk is larger, too, though still adequate only for weekend getaways for two.

Manually operated like before, the top drops to fit flush and smooth with the 2006 Mazda MX-5 Miata's body, eliminating the need for a snap-on tonneau cover. The top includes a glass rear window with a defogger, and a detachable hardtop is optional for both foul-weather climates and to meet amateur racing regulations. Black is the standard top color, with saddle (tan) available on upper trim levels.

Three interior color schemes, each matched to the piano black trim and silver control accents, complement the eight exterior colors. Base 2006 Mazda MX-5 Miatas have black cloth seats, while higher-grade models are equipped with a choice between monotone black leather or a black-and-saddle leather treatment.

Upon initial inspection, it appears that Mazda's engineers and stylists have met their goals of improving upon the handling, performance, and interior of the MX-5 Miata. Styling is a subjective matter, and while we like the overall shape and proportions of the new 2006 Mazda MX-5 Miata, the tall hoodline, bulging fenders, and wider midsection appear more clumsily penned than the upcoming Pontiac Solstice and Saturn Sky - new roadsters from General Motors that will go head-to-head with the MX-5 Miata when they debut later this year.

But, as with the RX-8, driving pleasure remains the elemental reason for the Mazda MX-5 Miata's existence. On paper - and with the RX-8 setting the example for light, lithe, and lively performance - it's hard to believe that this latest iteration of the world's best-selling roadster won't inspire a whole new love affair with open-air motoring. 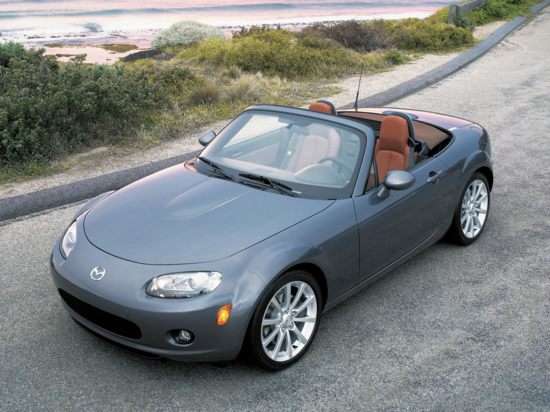