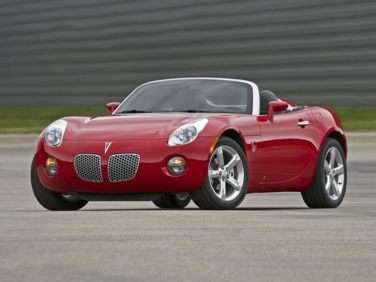 All About Pontiac Solstice

The Pontiac Solstice is a 2-seater roadster that has been in production since the 2006 model year. It is the first roadster offering from an American manufacturer in over 40 years and is currently Pontiac's sole entry in the performance sports car category. Vehicles that directly compete with the Pontiac Solstice for market share include the Saturn Sky, MINI Cooper convertible and Mazda Miata.

The production version of the Pontiac Solstice retains much of the original concept design that debuted at the 2002 North American International Auto Show. The vehicle is built upon the GM Kappa platform, which is also used for the Saturn Sky. Both vehicles share a similar design that includes a rounded front and rear end and 2-door design. Dimensions for the Solstice include a length of 95.1 inches, width of 71.3 inches and height of 50.1 inches. The vehicle was originally only available as a soft0top convertible. However, a hardtop Pontiac Solstice coupe with targa top is available as of the 2009 model year.

On the inside, the Solstice offers room for two passengers. Headroom and legroom are adequate for most individuals thanks in part to a low seating position. A wraparound dash envelopes occupants and is dominated by hard plastic.

The Pontiac Solstice is available in two trim levels – base and GXP. The base model features a 2.4-liter DOHC 4-cylinder engine that delivers 173 horsepower and 167 lb-ft. of torque. High-performance engine features include variable valve timing and an aluminum block. Other notable equipment on the base model includes 4-wheel independent suspension and near 50/50 weight balance in the front and rear.

The Pontiac Solstice GXP caters to speed demons with a 2.0-liter turbocharged direct-injection 4-cylinder engine that careens along at 260 horsepower and 260 lb-ft. of torque. Notably, this is the first gasoline-powered direct injection engine ever built by an American auto manufacturer. Additional performance features found on the GXP model include a sport-tuned suspension, limited-slip differential and traction control.

The Pontiac Solstice has been a hit with consumers and experts alike. Following the initial launch of the vehicle in 2006, more than 7,000 orders were placed within the first 10 days. This spurred GM to increase 1st-year production to a total of 10,000 vehicles. However, demand for the roadster has fallen since the initial introduction, with sales down 19% during the first half of 2007.

The 2009 Pontiac Solstice has a few changes and some new options since the 2008 model year. There are now more options available in the roof of the Solstice, including a weatherproof, rigid lid on the coupe. The new top required a few changes to the structure of the vehicle and is fixed in place from the back to the B-pillars. The top has an aluminum frame that is covered with aluminum sheeting. The hardtop version is available in both the Solstice and the Solstice GXP trim levels. The new top has a magnesium panel that is removable and there is room in the cargo area to store it. The panel lies between the A-pillars and B-pillars, giving the hardtop version of the Solstice an open-air option similar to the more familiar convertible version.

A new trim level has been added to the Solstice trims with the Solstice Street Edition. This trim has a soft top and a sport suspension as well as several feature upgrades standard. It features air-conditioning, sport pedals and an upgraded audio system with seven speakers as standard.

Another addition to the Solstice is the limited-slip differential that is now standard for every Solstice. There is also a new option for Bluetooth technology on all base models and as a standard feature on the Street Edition and GXP trim levels. Other new features include traction control, ABS and stability control as standard. Externally, there are two new paint colors options in 2009- Wicked Red and Deep Blue. The base model of the Solstice has a 2.4-liter engine with 173 horsepower. The GXP coupe models have an upgraded, turbocharged 2.0 liter engine with 260 horsepower. All models have either five-speed automatic or five-speed manual transmissions, which both choices available on each model. The suspension for the roadsters and the new cope are the same because of the light weight of the new hardtop roof.