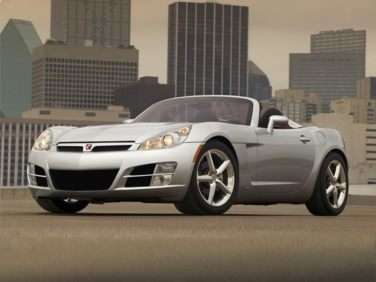 All About Saturn Sky

The Saturn Sky is a flashy two seater sports car. The Saturn Sky was first introduced in 2007. This excellent looking vehicle shares the same platform as the Pontiac Solstice. This sports car has a truly classy look that attracts attention where ever it goes.

However, some might say it lacks in power and performance compared to others in its class. Under the hood of this rear wheel drive convertible is a 2.4 L four cylinder Ecotec base engine offering 173 horsepower. There has been some controversy over this engine as it does not give the oomph one would expect from such a sporty looking car. The Sky goes from zero to 60 mph in 7.3 seconds. This is slow acceleration for its class. The engine also has a slightly noisy exhaust and misses the lovely growl of a sports car.

The interior of the Sky is comfortable to drive but has almost no cargo or storage space. Standard features for this vehicle include four-wheel antilock disc brakes, air conditioning, cruise control, remote keyless entry, and the usual power conveniences. There is also an extra layer of material in the convertible top to help reduce noise and a revised suspension system.

The Saturn Sky has an incredible exterior look to it that stops traffic where ever it is driven. It looks great, offers plenty of features and enough space for most people that as long as you aren’t looking for loads of power, this is a great vehicle to consider. For under $26,000, there is a lot of convertible to enjoy.

The 2009 Saturn Sky is a carryover from 2008. The 2009 Sky is sold in two different editions, the base model and the high performance Red Line. The standard engine in the Sky roadster is a 2.4 liter, 4-cylinder unit that produces 173 horsepower and 167 lb-ft of torque. Buyers can choose between either a 5-speed manual or automatic transmission, and fuel mileage numbers are 19 miles per gallon in city driving and 25 miles per gallon during highway cruising. The Red Line turns things up a notch with the addition of a turbocharged, 2.0 liter 4-cylinder engine that generates an impressive 260 horsepower and 260 lb-ft of torque. Fuel economy comes in at 19 miles per gallon in stop and go traffic and 28 miles per gallon on the highway, and the Red Line offers the same pair of 5-speed transmissions.