When sports cars sprang back to life in the early Nineties, Mazda’s Miata was leading the charge. This car, more than any other marque, was responsible for introducing a whole new generation of drivers to the simple joys of the two seat roadster. The sports car scene added a new niche in the Nineties. A second tier of thirty-$omething, super sports cars established themselves as a permanent fixture in the market. While there had been small runs of high powered two seaters over the years (Allard, Cobra and Tiger, to name a few), never before have we seen such numbers in the buffed roadster category. Through it all, Mazda resisted the urge for a power surge, cranking out thousands of traditional formula sports cars. Each year, they supplemented the company coffers with dressy special editions, most targeting fashion rather than function. Now, they’ve joined the fray, rolling out an off-the-rack model with added power at a bargain price – the 2004 Mazdaspeed Miata.By now, most are familiar with the basic Miata: a well sorted, well balanced update of the classic sports car design. Through their Mazdaspeed arm, Mazda has tweaked the standard package, with a select list of hop-ups. First and foremost, the 1.8 liter four cylinder is turbocharged to the tune of 178 hp (@6,000 rpm) and 166 lb. ft. of torque (@ 4,500 rpm). These numbers are +25 and +33%, compared to standard Miatas. Clutch, pressure plate, driveshaft, differential and six speed transmission have all been beefed up for the occasion.

The radiator core volume is increased, and a tube-fin, air to air intercooler added. Piston shapes were also reconfigured to handle the added fuel-air mixture. The results give the turbo Miata two distinct personalities. Driven at normal shift points, the turbo’s added power is barely noticeable. Leave your shoe in it, though, and it’s a different story. Just as the tach crests 5,000 rpm, the turbo wakes up, and the Miata surges ahead briskly to the 6,500 redline. The beefed-up shifter has lost none of its benchmark smoothness, so it’s a quick snick from cog to cog. 0-60 times are reported in the mid to high 6 second range, which is a good 1½ ticks faster than the normally aspirated model. Even with six gears, the Miata is well wound up at speed. Rolling at 70 mph, you’re turning 3,600 rpm.Of course, this added bark wouldn’t be as much fun if the handling had lost its bite. It hasn’t. The standard Miata chassis - a study in stickiness and tossability - has been tuned (stiffened), lowered (7mm) and strengthened (bigger stabilizers, front strut tower brace) in the interest of keeping up with the driveline. It retains all the things people have traditionally liked about Miatas – flat, nimble handling, nicely weighted steering (here, with a quicker ratio) and an overall balanced, forgiving nature. The tradeoff is a ride that’s a skosh harder than basic Miatas, but not enough to raise an eyebrow, except on choppy pavement.

The interior basics are standard Miata – a small, well sorted cabin highlighted by a near optimal driving position and ‘lowlighted’ by a luggage-phobic trunk. The well bolstered bucket seats are dressed in red and black, and the Mazdaspeed name brings with it some other spiff-ups: silver gauges, aluminum pedals and stainless scuff plates, among them. A six speaker, Bose 225 watt sound system with six disc changer and speed sensing volume control is standard, too. Outside it’s a subtle package: your choice of Gray or Red metallic, with low-key Mazdaspeed badging. The front view gets a model-specific spoiler and smoked headlight glass. The side shot shows Miata’s first 17” rolling stock, Racing Hart five spoke aluminum alloys wrapped with sticky, Toyo Proxes tread. In back, it’s low profile spoilers top and bottom, and a wide mouth exhaust tip sporting the Mazdaspeed logo.The Mazdaspeed Miata is a handsome little car, nicely packaging function and fashion. At $26,020 (delivered), it’s also a bona fide performance bargain. It’s able to heckle cars costing thousand more through the canyons (if you are so inclined), and simply a well mannered, sharply dressed roadster (if you are not). It would’ve been easy to overdo this concept and in the process, end up with a car far less affordable or every day drivable. To Mazda’s credit, they didn’t. Mazdaspeed is classic Miata, with a slightly sharper edge.

What's the difference between Mazdaspeed and the basic Miata?
Low-key dress-up items and select performance hardware. The intercooled, turbocharged motor makes 178 hp and 166 lb. ft. of torque (compared to 142 and 125 on basic Miatas).

And the downside?
Like all Miatas, a trunk that raises "Pack Light" from suggestion to mandate. 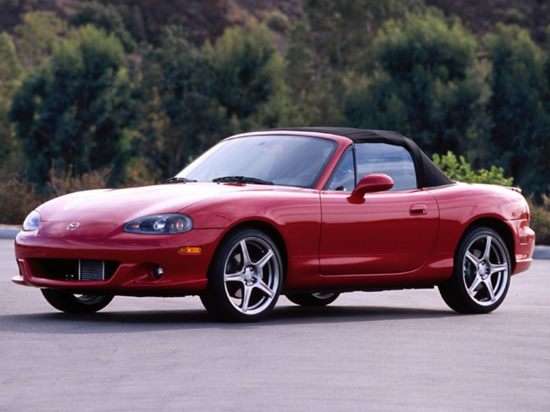