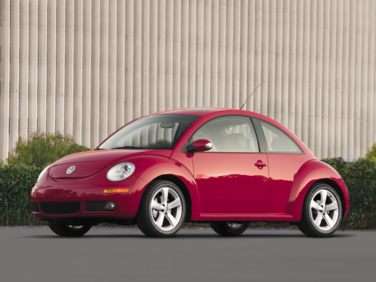 All About Volkswagen New Beetle

The Volkswagen New Beetle coupe is a two-door, five passenger compact hatchback, and the New Beetle convertible is a two-door, five passenger convertible. The Volkswagen Beetle was one of the most iconic cars of the 20th century. Starting in the 1940’s, the Beetle quickly captured the hearts and minds of automobile buyers who were looking for an alternative to the larger, more ostentatious vehicles coming out of Detroit during that era. The Beetle has become indelibly associated with the counter-culture 60’s, and it has remained a compelling reminder of that nostalgic time period. The original Beetle was inexpensive to own and operate, easy to build, and remained in production for many decades despite no longer being sold in the United States past the end of the 1970’s.

When Volkswagen unveiled the concept that would lead to the New Beetle in 1994, it proved to be so popular that a scant 4 years later it appeared in the VW lineup as a 1998 model. The New Beetle has remained largely unchanged over the course of the past decade, although cumulative upgrades and the introduction of a convertible model have helped to keep the vehicle fresh. For 2009, the New Beetle still bears the same streamlined, modernized version of the original Beetle’s oval exterior. While the vehicle may be larger than its spiritual ancestor, it still manages to maintain the same quirky personality that was so endearing to so many buyers. The 2-door coupe and the convertible are available in two trim levels, the S and SE, and both are outfitted with the same 2.5 liter 5-cylinder engine. Generating 250 horsepower, New Beetle customers can choose to row through the gears themselves with the base model’s 5-speed standard transmission, or upgrade to a 6-speed automatic. The SE trim is only available with the auto.

Entry level New Beetles are stocked with VW’s imitation leatherette seats, cruise control, and electronic stability control. While the vehicle is small, 4 airbags help to keep occupants safe in the event of an accident. The SE provides further leather accents to the steering wheel, gearshift and handbrake, as well as a nicer stereo system and upgraded wheels and tires. The convertible SE also benefits from a power roof.

The front-wheel drive New Beetle is no barn-burner when it comes to performance – the convertible takes 9 seconds to reach highway speeds, which is a bit slow for a compact car. The coupe is slightly quicker. Both vehicles display decent fuel mileage, achieving 28 miles per gallon during interstate cruising and 20 miles per gallon while driving around town. Since the New Beetle shares its platform with the Golf and the Jetta, the driving characteristics are quite similar to those two vehicles. The convertible is very much a fun vehicle, and the rear top folds down to resemble the whale tale shape made famous by corporate partners Porsche with the 911.

The New Beetle’s future is still up in the air. VW has been exploring several different directions in which they could go with the popular compact. Ten years is a long time to rely on a single design, even one with this kind of lineage, and the New Beetle could stand to have its looks updated. It is possible that the next Beetle will be in the form of a sportier hatch with a more aggressive look, or even a chopped-roof ragtop reminiscent of the Porsche 356 speedster.