History of the Ford Taurus in Photos

The Ford Taurus was revealed smack in the middle of the 1980's, and went on to not only sell over 200,000 vehicles in the 1986 model year, earn Motor Trend's 1986 Car of the Year, be used as a police car in "RoboCop," but also rescue Ford from almost certain bankruptcy. While it's hard to believe now that cars come equipped with cutting-edge safety technology, sophisticated GPS, the ability to play music from files on our phones, and airbags behind every panel imaginable, the Taurus was pretty innovative in the decade of tape decks and stopping into a gas station so Dad can ask for directions. Let's take a look at almost three decades of the Ford Taurus.

Ford started developing the Taurus in the early 80's to replace the LTD. American automakers had taken a beating by compact, efficient Japanese cars in the malaise-era 70's. Not only to comply with CAFE laws but to compete with the Chrysler K Cars, Ford gave the first generation Taurus front wheel drive and a more aerodynamic design to improve fuel efficiency. Gone was a traditional grille, replaced by a front metal panel and flush composite headlights.

Seen here with Harold "Red" Poling, Ford chairman & CEO from 1990-1993, the first generation Taurus was developed by interior and exterior teams working together - believe it or not a new concept - to develop a cohesive vehicle inside and out. Pre-internet "crowdsourcing" was done through customer surveys. One interior industry first was that the dash curved around the driver with an easy-to-use instrument touch panel to eliminate the driver having to take her or his eyes off the road. By the end of 1989, one million Taurus models had been sold.

The first decade of the Ford Taurus SHO - "Super High Output" - began in 1989. Originally slated to be a limited production model to use up Yamaha engines Ford was contractually obligated to use, the SHO proved to be so popular that they decided to continue sales.

If you read Lee Iacocca's autobiography (former Ford executive who engineered the Mustang in his early career), in the epilogue he rails against airbags, both their cost and ability to save lives. It all seems a bit quaint in retrospect, as the Second Generation Taurus (1992-1995) offered passenger side airbags as an option in the the first model year, then as standard after that - an industry first for a non-luxury car. The Second Generation Taurus also received a redesign; doors, windows, and door handles were still flush with the body, but the door was curved more at the top - all for efficient aerodynamics.

When the L trim level was dropped due to poor sales, the GL became the base level model - and was available as a wagon. Mirrors were painted the same color as the body, and chrome trim was added to the windows, with gray bumpers. The interior was made even more ergonomic with tweaks made to the driver's side touch controls and now-common integrated touch door locks.

The second-gen Taurus SHO was toned down a bit, borrowing from the now-defunct Mercury Sable (a slightly higher-end Ford brand which shared the Taurus platform.) It was still powered by Yamaha, and in 1993, available with an added automatic transmission option.

The Third Generation Ford Taurus was completely revamped for the 1996 model year. Everything was oval from the headlamps to the rear window in an attempt to upscale the car. A "Flip-Fold" center console, another new feature, was designed for both bench front seats (becoming center arm rests) and bucket seats with cup holders.

The curious rounded design language carried over to the wagon. Sales of the third-gen Taurus were lukewarm, and in 1997, in spite of heavy fleet sales, it lost its best-seller status to the Toyota Camry.

The third-gen SHO received equally curious treatment, focusing on a luxurious interior more than performance, and now offered only with an automatic transmission. Sales were disappointing, and the SHO was dropped from the model line-up in the upcoming fourth generation.

All was not bad news, however. In another first, the Taurus sedan was approved for NASCAR, and drivers Dale Jarret and Greg Biffle both won championships in the Taurus.

For the Fourth Generation Ford Taurus (2000-2007), the oval concept was tamed a bit. The trunk and roof were brought up in height, adding trunk space and head room.

The back of the fourth-gen wagon stayed essentially the same with the oval back window. Overall sales continued to be sluggish, and production of the wagon ended in 2004, as the entire Taurus line was phased out by October 2006.

The Ford 500 was planned as a replacement for the Taurus line. With a platform borrowed from Volvo, it was available in North America starting in September of 2004. By the 2008 model year, it was rebranded as the Fifth Generation Taurus.

Detroit was the setting for the launch of the Sixth Generation Ford Taurus. Equipped with FordSync, the beefier Taurus sported a new grille, Ford's Multi-Contour seats, and much of the modern safety technology such as collision warning and blind spot monitoring. As the U.S. was still being affected by 2008's financial meltdown, Mercury was axed from the Ford brand line-up, and the Sable - the Taurus's Mercury cousin - disappeared with the brand.

The Fourth Generation Ford Taurus SHO was launched a month later in 2009 at the Chicago Auto Show. With an EcoBoost V-6 under the hood and all-wheel drive, it was closer in appearance to the Ford Taurus than past SHO models, but coming with a spoiler, bigger wheels, and offered with performance packages.

The Ford Taurus SHO celebrates its 25 Year Anniversary this year.

Still in its sixth generation, the Taurus received some aesthetic and tech upgrades for 2013, carrying over into the 2014 model. Three trim levels are currently available - SE, SEL, and Limited, as well as the the SHO. 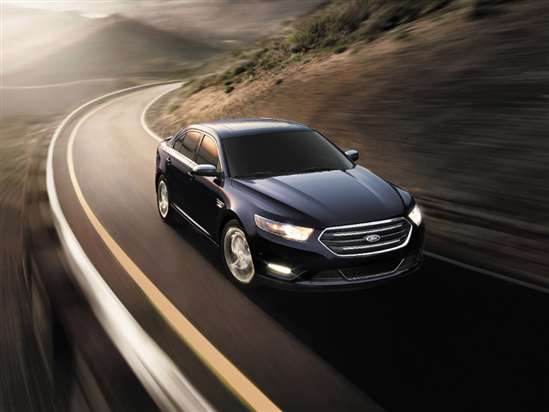