The Chevrolet Corvette it isn’t so much a sports car as it is an institution, part of the American motoring scene for nearly 65 years. Most people already have an opinion on the Corvette, whether they’ve driven it or not: Some think it’s one of the greatest sports cars in the world (and a hell of a bargain to boot), while others think it’s a wannabe that can’t hold a candle to Germany’s latest-and-greatest. Which is true? We spent a week with a 2017 Chevrolet Corvette Grand Sport convertible to find out.

The Corvette has been America’s sports car since the first one puttered onto the scene in 1953. (We say “putter” because the original Corvette had the s6-cylinder engine from Chevy’s economy cars. The Corvette didn’t get a V8, and its attendant roar, until 1955.) The Corvette has had good years and bad years, and some might argue more good than bad: Corvettes of the 1970s suffered from plummeting power levels and archaic suspensions, and the arguably-high-tech 1984 version was left to wither on the vine well into the 1990s. The 1997 C5 was a sea-change, showing Chevy’s willingness to turn the ‘Vette from a poser to a proper performance car. We’d argue that the two decades since have been good ones for the Corvette.

The most recent generation of the Corvette, known as the C7, was introduced for the 2014 model year. It was designed to improve upon the solid handling traits of the C6 models while addressing the (perfectly valid) criticisms of that car’s cheap-looking interior. Originally introduced in Stingray trim with a 460-hp V8, Chevrolet added a 650(!!)-horsepower supercharged V8, lighter-weight structure, and more advanced suspension to create the 2015 Z06. For 2017, a new Grand Sport version combines the Z06’s structure with the Stingray’s engine, and that’s the Corvette we drove.

For anyone who falls into the Corvette Hater camp, we urge you to head down to your local Chevrolet dealer and blag your way into a test drive. (Barring that, find a meeting of your local Corvette club; there’s bound to be a C7 owner who will let you take some time behind the wheel.) It’s impossible not to smile when you drive a Corvette: The V8 is loud and fast, and if the car you are driving happens to have the optional performance exhaust system, it’s one of the best-sounding cars on the road. (This nifty option also has a quiet mode, so you need not wake the neighbors when you fire up your Corvette.) The basic Stingray will get to 60 mph in well under four seconds, which is quick, people. The Grand Sport does it in 3.6, and the supercharged Z06 can get to 60 mph in just under three seconds. Few performance cars can accelerate so quickly, and those that do usually cost a heck of a lot more than the Corvette.

Of course, everyone expects Corvettes to be fast in a straight line; after all, that’s what Detroit does best. But what about handling? Isn’t that where the Corvette falls down? Not this latest generation, friends. We doubt any Porsche owner could complain about the Corvette’s incredible grip (thanks in no small part to its massive tires), responsive steering, and minimal body roll.

Optional on the Stingray and standard on the Grand Sport model we drove is GM’s brilliant Magnetic Ride Control system. It employs shock absorbers filled with a fluid that thickens instantly when a magnetic field is applied. This allows Chevrolet’s engineers to tune the Corvette for a more comfortable ride, as the dampers can be instantly stiffened when conditions demand.

The Stingray has multiple driver-selectable performance modes, and there’s a notable change in ride quality when the system is turned from Sport to the more sedate Touring mode. That said, we drove in Sport most of the time, as the ride was more than tolerable and we liked the sound of the louder exhaust. Sport mode also allows the driver to slide the tail a bit with the throttle, with the electronic stability control stepping in before things get out of hand. There’s also a Track mode, which sharpens the handling even further, a Weather mode, which makes the Corvette much more manageable in the rain, and an Eco mode, which, let’s face it, has no place in a Corvette.

Corvette detractors are quick to point out the crude design of the engine, and to some degree they have a point. The Corvette’s 6.2-liter V8 is an overhead-valve V8 with a single camshaft in the block and just two valves per cylinder—the same basic layout as the V8 that went into the 1955 Corvette. (Most modern engines have multiple camshafts over the heads and four valves per cylinder.) But there’s something to be said for this layout: It makes a monstrous amount of torque (the force that pushes you back in your seat), 465 lb-ft in the case of the Corvette. And the control equipment is as modern as can be. The ‘Vette has direct fuel injection, variable valve timing, and a cylinder deactivation system that runs the engine on four cylinders when power demands are low. As a result, the Corvette is surprisingly fuel-efficient on the open road: EPA fuel economy estimates are 15 mpg city/26 mpg highway for the 8-speed automatic and 16/25 for the 7-speed manual.

Yep, you read that last slide right: The Corvette offers a 7-speed manual transmission, with four vertical gates instead of the usual three. For the most part, it’s pretty easy to negotiate the gears, though we occasionally downshifted from seventh to fourth when we wanted sixth. (Frankly, the gearing is so close together, and the Corvette achieves such tremendous speeds in each gear, that we often barely noticed our mistake.) Though the clutch is rather heavy, the manual Corvette features a rev-matching feature that, when turned on, “blips” the throttle when downshifting and holds the engine at the proper speed for the gear you are trying to engage, ensuring a smooth shift with less clutch wear.

Of bigger concern is the manual transmission’s annoying habit of trying to force the driver to shift from first directly to fourth under low-power conditions in order to save fuel. The device uses some sort of mechanical interlock designed to guide the shift lever to fourth gear, but it doesn’t work smoothly—mostly we found ourselves unable to shift into any gear, and when we did make it into fourth, we found it a lousy substitute. Generally we’d just jam the car into third in frustration—or we’d just accelerate harder, which allows a direct shift into second; of course, that means using more fuel. We wish GM would simply do away with this ridiculous contraption—there has to be a better way (and we don’t mean ordering the optional 8-speed automatic).

And what of the interior? This has long been a Corvette weak spot, but the C7 has finally got it right, with high-quality materials that belie the ‘Vette’s bargain-basement price. Ergonomics are excellent, and we love the reconfigurable digital display and bright full-color head-up display that projects into the windshield (and, unlike some units we’ve seen in German cars, works just fine when the driver is wearing polarized sunglasses). The fittings befit the Corvette’s role as a luxury car, with genuine leather upholstery on the seats and soft-touch materials elsewhere. Storage space is at a premium, but there are plenty of places for the passenger to grab should they feel the need to cling on for dear life.

We drove the convertible version of the Corvette, which features a power-operated top that can be raised and lowered while the car is moving at up to 31 mph—very convenient should you choose to open or close the top just as the stoplight changes to green. The convertible option shaves 5 cubic feet from the Corvette coupe’s 15 cubic foot trunk, but there’s still plenty of useful space. That said, we wouldn’t rule out buying the hardtop model with the optional removable roof: It offers much the same experience as the convertible, with a more practical trunk and an (arguably) more pleasing profile.

A bargain buy you won’t believe.

A bargain buy you won’t believe.

We’ve mentioned several times what a bargain the Corvette is, so let’s quantify that: The Stingray coupe starts at $56,445 (including destination charge). Equipped with the Z51 Performance Package, which adds handling enhancements that driving fanatics will want, the price tag is $61,445.

Anyone who has shopped for a Porsche 911 knows right away what a bargain that is for a leather-lined 460-horsepower sports car. In case you haven’t shopped for a 911, the least-expensive model lists for $90,450 without any options whatsoever—more than a Corvette Stingray coupe with every single factory-installed option. And that’s for a car with 90 fewer horsepower and a 4.4-second 0-60 time. (The cheapest 911 that can beat the base-model Corvette to 60 mph is the 911 GTS, which lists for $126,950. Actually, that’s not true—the GTS trails the ‘Vette to 60 mph by 0.1 second—but we thought we’d cut Porsche a break.) Oh, and if you want a convertible top, Chevy charges $4,000 more across the model lineup. If you want a convertible 911, you’ll pay $12,300 more.

And now you see why we count ourselves in the Corvette Lovers camp. Today’s Corvette truly is a world-class sports car, and it’s also an unbelievable bargain, delivering supercar performance and handling for the price of a nice midsize luxury sedan. The Chevrolet Corvette is big, loud, brash and proud, and it’s the best performance bargain you can buy, bar none. This is America’s sports car, and America should be proud. 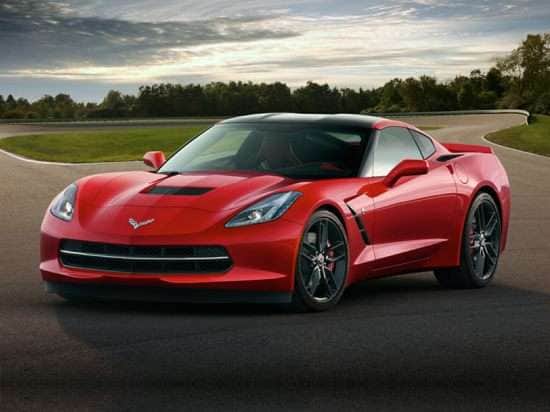