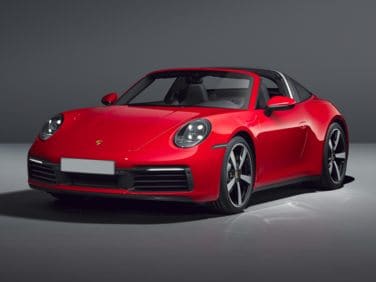 The Porsche 911 Carrera is a two-door, four passenger sports coupe, and a two-door, four passenger convertible. The Porsche 911 Carrera is one of the most enduring body styles in the history of not only sports cars, but motoring in general. For over 35 years, Porsche has been producing the familiar shape of the 911, and many of the different model variations that have been sold over that period of time bore the Carrera name. Traditionally rear-engine and air-cooled, the 911 Carrera made the transition to water-cooled engines in 2004 with the unveiling of the 997 platform. This version of the 911 Carrera is the fastest ever, and also boasts the most comfortable interior of any edition of the sports car.

There are several different trim levels available for the 911 Carrera. The base version of the sports coupe features a 3.6 liter 6-cylinder engine that generates a healthy 345 horsepower and 288 lb-ft of torque. This is enough to propel the light weight, 3000 lb 911 to 60 miles per hour from a standing start in only 4.6 seconds when equipped with a 6-speed manual transmission. A new semi-automatic transmission called the Porsche Doppelkupplung, or PDK is also available. It features 7 speeds and the dual clutch unit subtracts 0.2 seconds off of the vehicle’s acceleration time thanks to its extremely quick gear shifts.

There are three other trims available to 911 Carrera buyers. The Carrera S increases engine size to 3.8 liters and massages an additional 40 horsepower out of the 6-cylinders. It also improves torque production to 310 lb-ft. The same transmission options are offered, and the Carrera S is slightly quicker than the base model, along with boasting a higher top speed. For drivers who want an extra degree of control over their vehicle, the Carrera 4 and Carrera 4S deliver the same 3.6 liter and 3.8 liter engines as the base and S trim, respectively, but add all-wheel drive into the mix. Each version of the 911 Carrera can also be had in convertible form.

The interior of each 911 Carrera is a lesson in proper sports car ergonomics. Controls are laid out in a fashion that makes them easy to use and understand, especially when underway at triple digit speeds. The low-slung cockpit provides enough room for even taller drivers, although the vehicle is clearly not designed for more than two people – the rear seats are vestigial at best, good for hauling home a load of groceries but not much else.

This last point drives home one of the most appealing aspects of the Porsche 911 Carrera. There is a practical side to this no-holds barred sports car that many other vehicles in its class lack. The very fact that there is enough room inside the automobile to store more than just a pair of sunglasses has made it a very popular option amongst those who are looking to own a capable track vehicle but who require it to also pull daily driver duty. The 911 Carrera is a performance beast that also has a practical side, and although this practicality is limited by the small size of the vehicle itself, it is a welcome attribute.