The Honda Pilot helped invent the three-row crossover segment. In 2003, it was roomier, smoother, and quieter than its competition, ensuring years of steady sales. But now, the current-generation Pilot dates back to 2016, and it faces a flurry of newer competitors.

One of those challengers is the newly redesigned 2021 Kia Sorento. It’s still about half a size smaller than the Pilot, but it does fit in three rows of seats — without a lot of bulk. Which one is for you? Let’s go over how these two mid-size SUVs compare in eight different categories, and then name our overall winner.

The Sorento keeps costs down in part because it only includes a small four-cylinder engine on its base models, while the Pilot has a powerful V6. But it includes valuable standard features that are missing from the base Pilot, including a touchscreen infotainment system with Android Auto and Apple CarPlay. The closest comparison in the heart of the model lineup is the Sorento EX ($34,990) versus the Pilot EX-L ($38,360). At this price, the two crossovers have similar horsepower and equipment — including leather upholstery (a convincing imitation in the Kia’s case), heated front seats, infotainment touchscreens, full suites of driver-assist technology, and power liftgates. The Pilot does offer a couple of family-friendly features the Sorento lacks, such as an in-cabin intercom system and a rear entertainment system, but Kia also has some of its own exclusives: a heated steering wheel and a surround-view parking camera.

This year’s Kia Sorento is fully redesigned with crisper lines than before, replacing the gentler rounded-off SUV it replaced. Especially in the tested off-road-themed X-Line model, it looks more rugged than before — and than the Pilot.

The other difference between the two SUVs is their size. The Pilot is a significant 7.5 inches longer and 4 inches wider than the Sorento, and it’s not styled to hide its bulk in the slightest. Honda didn’t put a lot of decorations on its big box, which at least should mean there’s little to offend. Our tested vehicle was the Black Edition, which replaces other models’ shiny grille and wheels with (you guessed it) black, but it still doesn’t excite. We’ll leave this category to your personal aesthetic judgment.

Inside the cars, the Sorento’s more modern design and more upscale materials make it a clear winner. The Pilot’s interior is pleasantly finished and inoffensive, but it’s nothing remarkable in an SUV that can top $50,000.

The Sorento’s dashboard is styled with a rugged chunkiness and a mix of appealing textures. Even though it’s the less expensive SUV, it looks and feels more upscale than the all-business Pilot. It also has more advanced infotainment systems; Honda did update the Pilot’s in 2019, but its 8-inch touchscreen isn’t the industry’s most responsive or best-laid-out. The base model doesn’t have a touchscreen at all, while the Sorento offers a choice of a base 8-inch system and a 10.25-inch one. Both SUVs have some annoying touch-sensitive controls instead of easier-to-use physical buttons, but the Sorento is our clear winner.

The Sorento may have the prettier interior, but the Pilot’s is much bigger. Those extra dimensions that we talked about didn’t go to waste. The Pilot seats up to eight passengers, with plenty of room in the second row and even OK space for adults to squeeze into the far back. And up front, you feel like you’ve got acres of room to yourself.

This year’s Sorento has gotten a lot more agreeable for four passengers than before. We found the second row’s real-world legroom has improved substantially as part of the latest redesign. If you won’t be loading up your SUV with people often or for long trips, you should find it comfortable. Where the Sorento comes up short is carrying extra passengers. Most trim levels offer only second-row captain’s chairs, capping total capacity at six — two of whom need to squeeze into a small third-row seat. We didn’t find it unusable, but we’d reserve it for kids and emergencies. Base models have a more useful second-row bench seat for a total capacity of seven, with five able to sit in the first two rows.

Though it sounds like the closest number, volume behind the third row is perhaps the biggest gap between the two crossovers. The Pilot’s 16.5 cubic feet, while still not great for the segment, is substantially more useful than the 12.8-cubic-foot Sorento. The Sorento has little floor space behind the third row, and a bunching cargo mat robs even more of it. The Kia can carry little, if any, luggage if you’re using all six seating positions. The Pilot can also tow 5,000 lbs versus the Sorento’s 3,500 lbs.

The Sorento and Pilot have markedly different driving experiences, and each might be the better fit for a different type of driver. The smaller Sorento drives with more agility — sharper steering and handling, and a tighter turning radius. And most trim levels use a powerful 281-horsepower four-cylinder turbo. The base models, however, make do with a 191-horsepower four-cylinder.

The Pilot is smoother, more serene, and more cumbersome than the Sorento. This big, quiet SUV lacks the Kia’s agility, and its soft brake pedal also fails to inspire great confidence. And every 2021 Pilot uses a 280-horsepower V6 engine that’s smoother and quieter than the Sorento’s turbo four, to say nothing of its base engine. Agility and maneuverability, or power and quietness? We won’t choose for you, so this category is another tie.

Still, any of those numbers beat the Pilot. The EPA pegs it at 20 mpg city, 27 mpg highway, and 23 mpg combined with front-wheel drive and 1 mpg less with all-wheel drive. That’s pretty good for a V6 mid-size SUV, but it definitely trails the Sorento. What’s more, you can now get a Sorento Hybrid that scores 39 mpg city, 35 mpg highway, and 37 mpg combined. No hybrid Pilot is available.

Despite its age, the Pilot has stayed competitive when it comes to safety. However, the newly redesigned Sorento does better.

The Pilot earned a top rating of Good in most of its Insurance Institute for Highway Safety crash tests, and it scored Advanced (the second-highest of three ratings) for its automatic front-crash prevention. By contrast, the Sorento scored Good in all of its IIHS crash tests, and its front-crash protection is the top rating of Superior. What’s more, the Sorento also includes pedestrian-detection capabilities, while the Pilot does not. And while the National Highway Traffic Safety Administration hasn’t yet tested the new Sorento, the Pilot fell shy of perfection; while it scored five out of five stars overall, its frontal-impact protection slipped to four stars.

Even though it’s bigger than before, you might not fit in the Sorento. The Pilot is unquestionably roomier. It’s a cushy transportation cocoon for up to eight people and their stuff. But if you aren’t sure you need maximum space, we’d urge you to check out the Sorento.

The Sorento is more affordable yet more upscale in many ways. It’s well-finished and filled with technology. It drives nicely and gets great gas mileage for a three-row SUV. And if you’re carrying up to four adults and their stuff, it has plenty of room. What’s more, if you do find the Sorento too small, one of our favorite extra-roomy mid-size crossovers is available from the same dealership: the Kia Telluride. It beats the Pilot’s roominess and luxury, while still offering more features for the money. 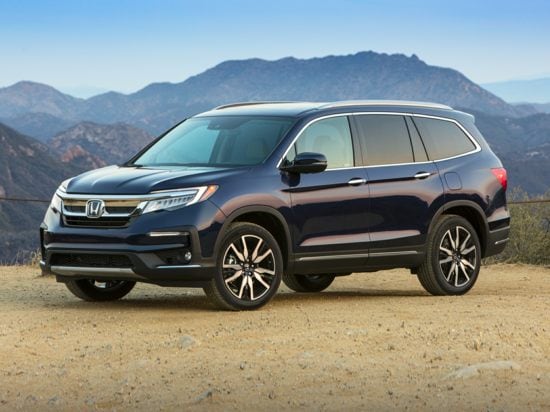