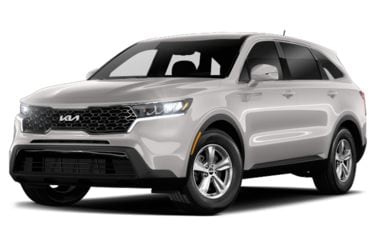 All About Kia Sorento

The Kia Sorento is a four-door two-wheel drive sport utility vehicle. The Kia Sorento has been around since 2003 when the original version hit the market with a 3.5 L V6 engine. Back then, the Sorento was classed as one of the larger seven passenger SUVs. The vehicle was available in both part-time and full-time four-wheel drive models with low-range gearing. Quality was evident even then, as was the attention to detail. The cabin was roomy and classy, offering loads of passenger and cargo space. The original Kia Sorrento received excellent reviews but fell short in the fuel economy department.

In 2007, the Kia Sorento went through a major overhaul receiving a new engine, transmission and a new powertrain. These changes lasted through until the 2008 model came out with a sharp improvement in design and styling as well as a few changes under the hood. The 2008 Kia Sorento base and LX models have a 3.3 L V6 engine offering 242 horsepower and 228 lb-ft of torque. The EX has a 3.8 L V6 engine that offers 262 horsepower and 260 lb-ft of torque. There is only one transmission available and that is a five-speed Sportomatic. This vehicle is available as a base, LX and EX trims. The EPA fuel economy rating for the Kia Sorento with the 3.3 L engine and a five-speed automatic transmission is 16 miles per gallon in the city and 22 mpg on the highway. For the 3.8 L V6 EX model and the same transmission, the fuel economy is 15 mpg in the city and 21 mpg on the highway.

The interior of the Kia Sorento offers comfort and spaciousness. There’s room for many people and loads of cargo. The Kia’s back seat does not fold down as one might expect but the cargo space is still quite sufficient for most consumers’ needs. The towing capacity of the 3.8 EX is close to 5,000 pounds.

One of the best things about the Kia Sorento, is the price. This is a lot of vehicle for the money.

The Kia Sorento is nicely loaded with standard features. For the base, there is an air-conditioner, full power accessories, flip and fold rear seats as well as a CD/MP3 audio system. Step up to the LX and there is remote keyless entry, roof rails, rear cargo cover, flip-up rear glass hatch, rear cargo cover, and cruise control added in. For the EX there are even more features like a bigger engine, power driver seat, fog lights, cargo net, heated mirrors, auto-off projector headlights and a more luxurious cabin to name just a few.

There are several packages available, including LX Sport Package and EX Luxury Package. Outside of packages are many individual options like fog lights, side step bars, wheel locks, remote start, and a tow hitch.

The Kia Sorento is well packed with standard safety features including dual front air bags, full-length side curtain air bags, driver knee air bag, front active headrests to help reduce whiplash, four-wheel anti-lock disc brakes, electronic stability control with traction control, fuel cut off system, side impact door beams, and energy-absorbing steering column. In the government crash tests, the Kia Sorento proved itself to be one of the safest vehicles of its class by receiving a five star rating across the board. In the rollover resistance tests, the Sorento only received a three star rating.

The 2009 Kia Sorento is a carryover from 2008. The 2009 Sorento is available in LX and EX trim levels. The LX model features a 3.3 liter V6 engine that produces 242 horsepower and 2238 lb-ft of torque. A 5-speed automatic transmission with manual shift control is the only available gearbox. Fuel economy is rated at 16 miles per gallon in the city and 22 miles per gallon on the highway for the two-wheel drive edition. The EX is outfitted with a 262 horsepower, 3.8 liter V6 that offers up 260 lb-ft of torque. The same 5-speed transmission makes an appearance, and fuel mileage for the two-wheel drive version of the LX trim comes in at 15 miles per gallon around town and 21 miles per gallon on the highway. All-wheel drive is available as an option across both LX and EX models.