When the 2014 Cadillac ELR debuted at the North American International Auto Show in Detroit last year it briefly knocked the world of electric cars off of its axis.  Here, finally, was a beautifully-sculpted, battery-powered coupe built by a major automaker under the banner of its well-respected luxury brand.  It seemed like the future had finally arrived, that the training wheels were off, and that mass-market acceptance of GM's Voltec EV technology was mere moments away.

And then, just a short time later, they revealed the Cadillac ELR's price: $75,000, or roughly 2.5 times the cost of a new Chevrolet Volt with which it shares its drivetrain.

It's been a tailspin of bad press and miniscule sales ever since for the ELR, a vehicle whose outstanding first impression has been overcome by the distaste of premium buyers unwilling to pay supercar money for a very pretty automobile that drives well but doesn't match up, performance-wise, with the expectations engendered by its lofty MSRP.  After having spent several days behind the wheel of the Cadillac ELR, I can only add my voice to the growing chorus calling for GM to drop the price of entry for this marvelous electric coupe so that more than just a handful of well-heeled early adopters can experience its charms.

Everything Else Is Awesome

Everything Else Is Awesome

Now that I've addressed the fact that the 2014 Cadillac ELR is roughly $15,000 too expensive to sell in numbers, I can tell you the rest of the story, which goes roughly like this: the ELR is an amazing accomplishment.  I'm smitten by the two-door Cadillac for several reasons, starting with its stunning styling which seems lifted directly from the serotonin glands in my brain and then writ into metal and glass.  From every angle, both near and far, the Cadillac ELR sears into your retinas by way of the brand's now-fully mature Art & Science design language, which more than a decade after its introduction still manages to feel fresh and vital.  When you cruise around in the ELR, everyone's eyes are on you.

Cadillac stylists didn't stop when they got to the interior of the ELR, either.  While elements of the Chevrolet Volt platform used by the Cadillac can be detected by those familiar with both vehicles - most notably, the full-length console that runs from front-to-rear in the ELR and sits on top of its T-shaped battery - one would be hard-pressed to call the coupe derivative in any way.  In fact, the ELR has perhaps my favorite interior of any Cadillac I have recently driven, with its snug, glove-like cockpit, abundance of leather and piano-black trim, and a very useful and configurable LCD gauge display.

CUE Is Front And Center

CUE Is Front And Center

There's also the Cadillac CUE system making an appearance as the primary interface between the driver and vehicle systems such as infotainment, communications, and climate control.  Some find themselves quickly discouraged by CUE's capacitive touch panels, while others are perfectly comfortable navigating their way around its various features.  I find myself somewhere in the middle.

While discussing its interior, a note concerning the 2014 Cadillac ELR's practicality.  It's extremely unlikely that you'll find a full-grown adult willing to fold themselves into the compressed shape required to spend any time at all in one of the coupe's two rear seats.  While the first two positions in the ELR are comfy, the back buckets aren't meant to do much more than haul a few extra duffel bags that didn't fit in the trunk.  I don't see this as a strike against the Cadillac, as only a small slice of the car's intended audience will be using it as their family vehicle of choice.

It's no secret that the 2014 Cadillac ELR has been built using the bones of the Chevrolet Volt, GM's first broad-spectrum commercial foray into the EV landscape.  Don't take that to mean that the ELR is merely a re-bodied Volt, however, as a number of changes have been made to the car in order to give it a distinctive driving personality to go with its unique looks.  Specifically, the Cadillac has been blessed with HiPer front struts, which do an excellent job curtailing torque steer and improving road feel on larger vehicles like the Buick LaCrosse, Buick Regal, and Cadillac XTS, and it also comes with a revised rear suspension linkage.  The Watts setup isn't meant to carve corners, but it's an upgrade over the Volt.

Park the ELR and Volt side-by-side and you'll notice, too, that this is a bigger car: almost nine inches longer and over two inches wider, factors which feed into the Cadillac's enhanced stability and smoothness while cornering.  In fact, the 'compact' ELR is within five inches, in terms of length, of the first-generation Cadillac CTS, which was the sedan that first introduced the Art & Science design theme to the world in 2003.  My, how we've grown.

Admittedly, the 2014 Cadillac ELR and the Chevrolet Volt do share a very similar electric drivetrain, one that makes use of a gas-fired generator to extend the vehicle's range by an additional 300 miles after its 37 miles of battery-only travel have been exhausted.  This is slightly less EV travel than is available with the Chevrolet, but there's a reason for the drop, as the ELR offers up 157 horsepower when running on battery power alone - eight ponies more than the Volt - and if you're out of electric juice and have the generator whirring in the background, then you can sample a full-system blast of 217 horsepower.

I didn't notice a huge difference in acceleration between the Volt and the ELR, which is most likely due to the fact that both vehicles offer instant-on electric motor torque that goes a long way towards disguising off-the-line performance.  It's worth noting that the Cadillac is 300 lbs heavier than the Chevrolet, too, which balances out any perceived gains in whatever imaginary quarter mile race the coupe might be running.  The car felt confident in every driving situation, and I never lacked merging power when I needed it.

The 2014 Cadillac ELR features Tour, Sport, Mountain, and Hold driving modes.  The default Tour was the selection I made the most, as it allowed me to drive close to 100 miles over the course of three days on battery power alone.  I didn't feel like I had to baby the ELR during this time in order to maximize my range - I simply drove normally and plugged into my household 110-volt outlet whenever the vehicle was parked in front of my garage.  Sport mode enhances throttle response and activates the car's variable steering system in a more aggressive way, while Mountain works harder to charge the ELR's battery via the regenerative braking system and the gas-powered generator.

Hold is an intriguing addition to the drivetrain that was only recently gifted to the Volt as well.  It fires up the genny and keeps it running at all times in order to 'preserve' battery-only driving for a future date.  I mentioned generator noise in a previous paragraph, but it's minimal: while operating the car in Hold mode I only occasionally heard the sounds of internal combustion leaking into the passenger compartment.

Unique to the 2014 Cadillac ELR is a paddle-braking feature that makes use of steering-wheel mounted flappers to activate the car's regenerative braking system.  It's not easy to get used to this method of slowing down the car, for unlike a traditional brake pedal, paddle travel doesn't in any way relate to the amount of brake being applied.  It's a set ratio that one triggers, instead of manipulates, by holding down one or the other paddle, and the lack of feedback makes it difficult to judge at what rate the coupe will be losing speed.

After having seen what can be accomplished in the world of pure EVs by Tesla with the outstanding Model S sedan, it's clear that cars like the 2014 Cadillac ELR represent a bridge between plug-in hybrids and the next step in battery-only transportation.  With its ability to lessen range anxiety by way of its gasoline generator, the ELR is the perfect fit for a world where super-fast electric charging stations have yet to propagate between major urban centers in North America.  My experience in using the Cadillac around town, too, points out that restricting one's journeys to city-specific driving means you'll only rarely ever have to pay for gas again as long as you own the car.

As gorgeous as the ELR is, and as pleasant and comfortable as it is to drive, it's still much too expensive to be seriously considered alongside equally-pricy, yet higher-performing models like the Tesla Model S.  It is, however, a mainstream electric car that's backed by an actual dealer network that stretches from sea to shining sea, which isn't a claim that upstart Tesla can make about its own EV entry.  Charge us a premium over the Volt, Cadillac, but make it one that more people can stomach and you'll clean out that excess ELR inventory in a hurry. 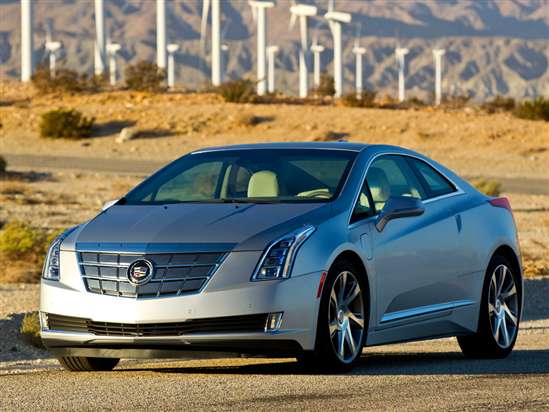