It’s easy to get excited about a BMW. Known for precise driving dynamics, build quality, and understated good looks, these German-made vehicles have earned their place among the best-selling luxury cars on the market. But BMW’s rise to the top hasn’t come without transformation. The company’s humble vehicle lineup has swollen to include almost every segment of the luxury market, plus a few BMW has created. With this success and expansion, BMW has been accused of losing its way, of slipping away from the driving characteristics that made the brand what it is today.

With the fully redesigned X3 — a vehicle that helped propel the compact premium SUV into popularity — BMW aims to retain that enthusiast DNA while offering the features contemporary luxury buyers desire. Take a look at these 10 things to know about the 2018 BMW X3 and decide if BMW is still on the right track.

1. This is BMW’s third-generation X3.

1. This is BMW’s third-generation X3.

In 2003, BMW introduced its X3 based on the 3 Series platform. Marketed as a “sports activity vehicle” rather than simply being called a crossover or SUV, the X3 followed in the footsteps of the X5, BMW’s first X model. The first-generation X3 came only with BMW’s xDrive all-wheel drive system.

The second-generation X3 debuted in 2010 as a 2011 model, with production moving from Austria to the U.S. By this time, BMW had also launched the smaller X1 crossover, so the X3 moved upmarket in size, power, and accommodations. Despite adding a rear-wheel drive (sDrive) version, the second generation X3 was largely considered a dynamic letdown, with sluggish responses and tangible heft. The third-generation X3 debuts as a 2018 model, with 120 pounds of weight savings, potent powertrains, and revised handling. Is it the best one yet? We think so.

2. M finally got its hands on this one.

2. M finally got its hands on this one.

A big reason for our newfound X3 enthusiasm is the involvement of BMW’s M division. For the first time, BMW’s in-house tuner got its hands on the X3, resulting in the M40i. While it's not a full-blooded M-car, the X3 M40i uses M performance parts and M engineer brains to create a distinct driving experience beyond the xDrive30i’s impressive dynamics.

Specific enhancements for the X3 M40i include a 355-horsepower six-cylinder engine, a firmer sport suspension, performance brakes with blue-painted calipers, a variable-ratio steering rack, and available adaptive dampers that adjust automatically based on driving behavior. The M guys and gals also fiddled with the automatic transmission to give the M40i quicker shifts.

The X3’s performance hardware makes for the perfect even-numbered progression. Buyers have a choice of two turbocharged engines: a 2.0-liter four-cylinder making 248 hp and 258 lb-ft of torque or a 3.0-liter inline six-cylinder with 355 hp and 369 lb-ft of torque. If you opt for the four-cylinder, you can choose between rear-wheel drive or all-wheel drive. Whichever powertrain or drivetrain you prefer, all X3 models are paired with an eight-speed automatic gearbox.

All this adds up to some other impressive numbers. The entry-level X3 xDrive30i hits 60 mph in 5.7 seconds and the top-spec X3 M40i sprints to 60 mph in just 4.6 seconds.

4. That big new kidney grille is here to stay.

4. That big new kidney grille is here to stay.

Save for a few outlandish products like the i3 and i8, BMW vehicle styling is traditionally understated — or at least it was. The automaker’s recent concept vehicles have sported wild angles and aggressive stances, but their designs are all dominated by a massive front grille — a new interpretation of BMW’s classic kidney grille. This signature cue has now been integrated into a number of BMW models, including the 2018 X3.

While not as impactful as the 2019 X5’s front end, the X3’s toothy fascia is a bit bizarre. Larger grilles are a trend in the industry (Mercedes-Benz even offers a giant, illuminated hood emblem), so BMW’s new look isn’t totally out of left field. Still, we wish it was better integrated into the SUV’s exterior design.

In 2015, BMW pioneered gesture controls within a vehicle, and that technology has now made its way into the new X3. The feature works as a replacement for physical or touchscreen controls by using a 3D sensor to detect a series of pre-selected hand movements, each of which is tied to certain functions like volume controls, smartphone interfaces, and others.

While it might sound like a gimmick, the system is pretty intuitive and can become second nature before long. Some of the most helpful controls include accepting or rejecting phone calls, panning the surround-view cameras, and shortcutting to navigation presets. For now, the functions are limited — but fleshed out a bit further, gesture control could reduce driver distraction significantly.

The 2018 BMW X3’s other technology may not be class-exclusive, but it does stimulate the cabin’s appeal. Standard on M40i models and available on lesser X3 trims is a new 12.3-inch driver display that blends analog style with digital readouts. Fun fact: Most fully digital driver monitors on the market are the same dimensions.

The X3’s system is reconfigurable based on drive mode, adjusting the tachometer and speedometer graphic and position. However, it doesn’t incorporate navigation data like some competitors' systems. Combined with a color head-up display, a new 10.3-inch touchscreen infotainment system, a Wi-Fi hotspot, wireless smartphone charging, and Apple CarPlay, the X3 offers an intuitive tech bundle.

Do you lug around a large Nalgene or another plus-size water bottle on a daily basis? If so, then you’ve no doubt struggled to find an accessible place to put said bottle within your vehicle. Enter the BMW X3. With door cubbies designed to hold 64-oz containers, your oversized drink-mate is always close at hand.

In fact, cargo capacity and interior volume is a theme of BMW’s “compact” SUV. Thanks to clever packaging of the new X3’s 2.2-inch-longer wheelbase, rear-seat passengers have plenty of legroom, yet the rear storage area is a generous 29 cubic feet. For greater utility, folding the 40/20/40 split rear bench opens up 63 cubic feet of total volume.

At a starting price of $43,445 (including destination charges), the 2018 BMW X3 xDrive30i comes well-equipped with traditional luxury goodies, but it forgoes many of the driver assistance features that are standard on many competitors and even some non-luxury vehicles. BMW does allow buyers to option a full roster of driver aids, but they can balloon the X3’s price considerably.

In addition to a standard backup camera, BMW offers a $900 package that bundles a lane-departure warning, blind-spot monitoring, and a forward-collision warning with automatic emergency braking. For full-speed adaptive cruise control, lane-keeping assist, and traffic-jam assist, customers will need to add another $1,700 package. Accessory aids like a surround-view camera, parking sensors, and parking assist add $1,300 to the base X3’s price tag or $700 to the M40i’s figure.

9. This may be the fiercest vehicle segment today.

9. This may be the fiercest vehicle segment today.

The fight among mass-market mid-size sedans continues to be an intense display, but the battle between compact luxury SUVs may be even more brutal. The sheer number of options is startling. The Audi Q5, Mercedes-Benz GLC, Porsche Macan, Lexus RX, and BMW X3 represent the premium mainstays, while “entry-lux” challengers like the Acura RDX, Cadillac XT5, Infiniti QX50, Jaguar F-Pace, Volvo XC60, and Alfa Romeo Stelvio vie for customers with tighter budgets.

Each vehicle promises a perfect combination of performance, style, comfort, and technology, but only a few succeed — we’d argue the BMW X3 is one of them.

10. The Spartanburg plant is BMW’s biggest in the world.

10. The Spartanburg plant is BMW’s biggest in the world.

BMW has produced its X3 in America since 2011, but the company’s facility in Spartanburg, South Carolina, looks very different today. In large part due to the X3’s popularity, Spartanburg has become BMW’s largest production plant in the world, with 411,000 vehicles built in 2017.

BMW will invest $600 million in this facility over the next several years to grow the workforce from a current 9,000 employees and to prepare for production of the upcoming X7 SUV. Every X model except for the X1 is built in South Carolina. 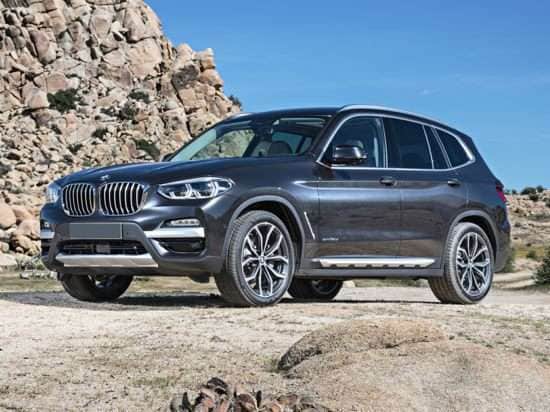