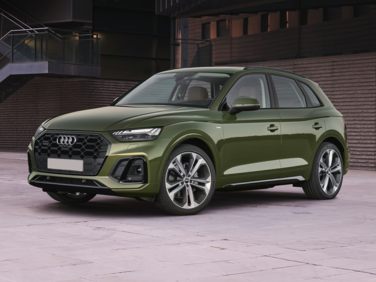 All About Audi Q5

The Audi Q5 is a four-door, five passenger luxury crossover. For years, Lexus pretty much had the luxury crossover market all to itself. For 2009, three brand new competitors are joining the race including the Audi Q5. Sharing its underpinnings with the Volkswagen Tiguan, the 2009 Q5 further expands the growing Audi lineup in addition to the recent introductions of the A5/S5 and A3. With fuel prices going back down, Audi’s new crossover is a great buy for those looking for a spacious, attractive vehicle as well as the peace of mind that comes with decent fuel economy. The 2009 Audi Q5 competes against the BMW X3, Infiniti EX35, Land Rover LR2 and Lexus RX 350, while Mercedes-Benz GLK-Class and Volvo XC60 are waiting eagerly in the wings.

Although the Q5 will have its fair share of direct competition, the familiar Audi design will let the new crossover stand out from the crowd. As Audi is more than proud to point out on the Q7, the new Q5 is anything but boxy. From just about every angle, the Q5 is instantly recognizable as an Audi, from the large upright grille to the wide LED taillights. Like the larger Q7, the Q5 incorporates the taillights into the liftgate, which provides a cleaner look and a wider cargo opening. Adding to its appearance, the Q5 borrows an idea from the R8, A5 and 2009 A4 by using LED daytime running lights that are integrated into the headlamps. The Q5 S-line will offer sportier exterior modifications as well as some interior enhancements.

As expected from any Audi vehicle, the Q5 has an interior replete with soft leather and attractive aluminum or wood accents. The layout in the Q5’s cabin will be very similar to other Audi vehicles especially in the center stack and center console. Making its debut in the 2009 Audi Q5, the third generation of Audi’s Multi-Media Interface (MMI) continues to feature control of the stereo, navigation, telephone and vehicle options from the simple operation of the central knob and four outer buttons. For enhanced comfort and ambiance, the Q5 will offer triple-zone climate control, a large panoramic sunroof and a power liftgate as optional features.

Unlike the Tiguan, which uses a turbocharged inline-4 engine, the Q5 comes only with the powerful 3.2-liter V-6 under the hood. With 270 horsepower and 243 lb-ft of torque, Audi estimates that the Q5 will sprint from 0-60 miles per hour in 6.8 seconds. Audi’s famed quattro® all-wheel drive system is also standard equipment, giving the Q5 optimal handling and traction. Not just a soft-roader, Audi designed the Q5 to be able to tackle just about any trails it encounters. With ground clearance of almost eight inches, fording depth of almost 20 inches, 25 degree approach angle and 17.5 degree breakover angle, Audi’s Q5 has more off-road abilities than most drivers will ever venture to test.