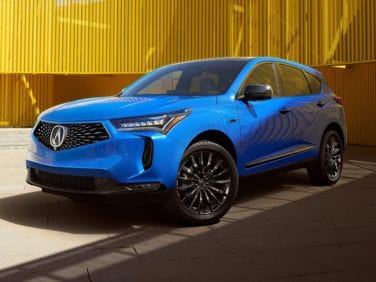 All About Acura RDX

The Acura RDX is a four-door, five-passenger luxury compact crossover SUV. The RDX was the first compact luxury crossover SUV available from Acura. It was initially introduced to consumers as the Acura RDX concept car. The production version of the RDX debuted at the New York Auto Show and first went on sale in late summer of 2006. This is another attractive vehicle for the Acura line with it’s 18-inch wheels, five-point grille, dual-outlet exhaust and a smoother look in the rear end with the integrated tailgate into the bumper. The RDX is manufactured in Marysville, Ohio alongside the Acura TL and Honda Accord.

The Acura RDX offers a turbocharged 2.3L inline four-cylinder engine that comes paired with a five-speed automatic transmission with overdrive. This engine offers 240 horsepower with 260 lbs ft of torque and rivals some of the six-cylinder engines on the market. The engine shifts nicely through the gears at a responsive speed. The vehicle comes equipped with the Super Handling AWD feature, which means you’ll never be in a position of taking a turn too fast.

All this power does not correlate to fuel savings. The EPA fuel economy rating for this vehicle is 17 miles per gallon in the city and 22 miles per gallon on the highway. Still, if you’re looking for turbo power and an easy to handle all-wheel-drive, the 2008 Acura RDX is a solid choice.

The interior of the Acura RDX offers a lot of quality and comfort for the price. There are comfortable seats in both the front and the back. The rear seating arrangement is cozy without being cramped. The heated driver’s seat has an eight-way power unit with lumbar support. The cargo area is also decent with large door pockets and armrest bins to hold plenty of small items. The center console is big enough to hold a small laptop.

The 2008 Acura RDX is one of the best equipped SUVs on the road. It has extensive equipment standard and has available many other options. Standard features include 18 inch alloy wheels, a moonroof, full power accessories, heated front seats, Bluetooth, leather upholstery, dual-zone automatic climate control, xenon headlights, and the driver’s seat even has a memory for all the settings. For entertainment, there is a 360-watt sound system with an in-dash six disc CD/MP3/WMA player, XM Satellite Radio, seven speakers and an auxiliary input for portable MP3.

There is only one optional package – the Technology Package. This package includes a navigation system with voice recognition and real time traffic information. There is a GPS-linked solar-sensing climate control and a 410-watt, 10 speaker audio system with XM Satellite Radio and six-disc SC/DVD Audio player with MP3/WMA. This adds DTS and Dolby Pro Logic II processing.

The Acura RDX rates well in safety standards. Included on the vehicle are front-seat side airbags, head-protecting side curtain airbags with a rollover sensor, anti-lock brakes with brake assist, stability control and traction control even active front head restraints. Also standard are specific features for children like child door locks and an engine immobilizer. The RDX has earned the Insurance Institute for Highway Safety (IIHS) top safety pick.

The 2009 Acura RDX is a carryover from 2008. The 2009 RDX is sold in a single trim level that can be upgraded with a Technology package. Both versions of the RDX use a 240 horsepower, turbocharged 4-cylinder engine that also produces 260 lb-ft of torque. This motor’s fuel economy is rated at 17 miles per gallon in the city and 22 miles per gallon on the highway. A 5-speed automatic transmission sends power to all four wheels through Acura’s Super-Handling all-wheel drive system.