Absolutely nothing else sounds as seductive as a powerful V-8 engine at full throttle. OK, well, the burbling sounds you get from a V-8 engine right after you let off full throttle and the engine winds down is pretty seductive too.  But long story short, there is much to love about a V-8 engine. And, when that V-8 engine resides in a beautifully styled and highly agile sports car, very few vehicles in the automotive spectrum are capable of delivering more pleasure.

Some of the most coveted automotive manufacturers extant have V-8 sports cars in their lineups. Indeed, the V-8 engine is the very heart of some of the world’s most noted sports cars; Chevrolet Corvette being one that comes readily to mind in this regard. Recent advances in turbocharging and direct fuel injection have made these engines more powerful than ever—while still permitting them to return relatively good fuel economy.

For its given size, a V-8 engine often delivers the best balance of performance and efficiency. While four- and six- cylinder engines may return better fuel economy, without turbocharging or direct fuel injection it is difficult for them to deliver the power output of a V8. A V12 on the other hand makes the power, but is also heavier and consumes more fuel. Thus, when huge power and relatively light weight are two of the targeted parameters, few powerplants can best the V8.

Yes, if out and out performance is what you’re after, there are a number of choices you can make to get more than the Aston Martin V8 Vantage is capable of delivering. However, as V-8 sports cars go, the Aston offers eye-bulging good looks, hand craftsmanship, outstanding luxury features, a sumptuously outfitted interior, and one of the sweetest engine notes known to humankind. The 2012 Aston Martin V8 Vantage (available as both coupe and convertible) qualifies for our list of Best V-8 Sports Cars for 2012, thanks to its 4.7-liter V8 engine, which produces 420 horsepower and 346 ft.-lbs. of torque. A six-speed manual transmission is standard; while a seven-speed single-clutch automated manual transmission is optional.

With the effusion of praise heapedupon the Audi R8’s new 5.2-liter V10 engine, many may have forgotten the model was introduced with a 4.2-liter V8. Further, a number of reviewers have pronounced the Audi R8 4.2 Quattro (available as a coupe or a convertible) as their favorite iteration of the mid-engine exotic sports car from the Ingolstadt-based manufacturer. The 2012 Audi R8 4.2 gets its spot on our list of V-8 Sports Cars for 2012 from a mid-mounted 4.2-liter V8 (poised behind the passenger compartment) generating 430 horsepower and 317 ft.-lbs. of torque. Audi’s Quattro all-wheel-drive system is standard equipment, as is a six-speed manual transmission with a gated metal shifter. Audi’s R tronic six-speed single-clutch automated manual transmission is optional.

While BMW’s inline six-cylinder engines are the very essence of smoothness and sophistication, the company’s V-8s manage to pull off the same feat while simultaneously delivering pavement-wrinkling output. The all-new for 2012 BMW 650i and M6 make our list of the Best V-8 Sports Cars for 2012 with a choice of two twin-turbocharged V-8 engines. The 2012 BMW 650i is powered by a 4.4-liter twin-turbo V-8 generating 400 horsepower and 450 ft.-lbs. of torque. While rear-wheel drive is standard, BMW’s xDrive all-wheel drive is available as an option. An eight-speed automatic transmission with manual shift control is standard for both drivetrains; a six-speed manual is optional for rear-drive cars. The 2012 BMW M6 also uses a twin-turbocharged 4.4-liter V8, but it produces 560 horsepower and 500 ft.-lbs. of torque. A seven-speed automated manual transmission feeding the rear wheels is the only powertrain choice. The V-8 fitted to the M6 also has an automatic stop/start engine function to conserve fuel at traffic signals.

The benchmark in its class, the BMW M3 has enjoyed legendary status since its first iteration was introduced in 1986, so it’s no surprise to find it on our list of Best V-8 Sports Cars.  Powered by first four- and then six- cylinder engines, the current M3 makes our list courtesy of its 4.0-liter V8. This powerplant routes 414 horsepower and 295 ft.-lbs. of torque to its rear wheels through a six-speed manual transmission. A seven-speed dual-clutch automated-manual transmission (called M-DCT in BMW-speak) is the optional transmission offering, featuring manual operation via steering wheel mounted paddles. The M-DCT also offers a full automatic mode. Additionally, all 2012 BMW M3s employ a specialized locking rear differential.

Arguably America’s only true mass-produced sports car, the Chevrolet Corvette has been pretty much an object of worship by sports car enthusiasts for years. While today, the Corvette is inseparably associated with the V-8 engine; the first Corvettes on the market back in 1953 were hand-built and ran an inline six-cylinder powerplant feeding the rear wheels by way of a two-speed automatic transmission. Today, a wide variety of V-8s are fitted to the various Corvette models, ranging from 430 to 638 horsepower routed through six-sped manual and six-speed automatic transmissions. There are also a variety of both coupes and convertible Chevrolet Corvettes offered. The quintessential V-8 powered sports car, for a list of the Best V-8 Sports Cars of 2012 (or any year for that matter) to be complete, it would have to include every version of the Chevrolet Corvette.

Currently, the only remaining mid-engine sports car in Ferrari’s lineup, the 458 Italia is offered with both a fixed roof and a retractable hardtop. The ultimate evolution of the 246 Dino model introduced during the period when Enzo Ferrari would not permit cars with anything other than V12 engines to be badged as a Ferrari (1968), the Dino nevertheless opened the mid-engine sports car market to the storied Italian manufacturer. Today, of course a number of V8 sports cars have been badged with the prancing horse and Ferrari script. The most recent model to do so, the 458 Italia uses a 4.5-liter V8  (4-5-8, get it?) that sends 562 hp and 398 ft.-lbs. of torque screaming to the rear wheels through a seven-speed, dual-clutch automated manual transmission.

The first front-engined Ferrari sports car to use a V-8 engine, the 2012 Ferrari California is also a quite versatile model, thanks to its folding hardtop. This entry on our list of the best V-8 sports cars offers all the benefits of a closed coupe, with the top-down motoring potential of a traditional convertible. Powering the lovely “entry-level” Ferrari is a 490-horsepower, 4.3-liter V8, which delivers 372 ft.-lbs. of torque to the rear wheels by way of a seven-speed dual clutch automated manual transmission. Little-known fact: The Ferrari California was originally intended to be a Maserati.

Powerful, luxurious and exceptionally good-looking, the Jaguar XK is easily one of the world’s most desirable cars and one of the best V-8 sports cars for 2012. Offered in both coupe and convertible forms, the Jaguar XK singularly embodies the Jaguar philosophy of combining grace with space and pace. Crafted primarily of aluminum, the XK can comfortably offer a multitude of luxury features—while still maintaining reasonably light weight. The 5.0-liter V-8 fitted to the Jaguar has been tuned to provide three different levels of output; from 385 horsepower in its normally aspirated form, to 510 and 550 horsepower in the supercharged XXR and XKR-S iterations respectively. Rear drive and a six-speed automatic transmission are standard fare, regardless of the engine choice.

Maserati is a name with a racing heritage that that goes all the way back to 1914. While the company produced its first road car in 1947, it was the 1958 3500 GT that really put it on the map for road cars. Today’s Maserati Gran Turismo is the spiritual successor to that car. A four-seat grand touring sports car, the Maserati GT is voluptuously shaped, luxuriously appointed, and remarkably fast. Landing it on our list of the Best V-8 Sports Cars is its 4.7-liter, 433-horsepower V-8 producing 361 ft-lbs of torque. The Gran Turismo MC model gets a 444-horsepower version of the engine—capable of generating 376 ft.-lbs. of torque. Both engines are paired with a six-speed automatic transmission, configured to route power to the rear wheels.

The first new mid-engine sports car to wear the McLaren nameplate since the all-conquering McLaren F1 (produced from 1992 to 1998), the McLaren MP4-12C uses a carbon fiber composite chassis and is powered by a mid-mounted 3.8-liter twin-turbocharged V8 engine making 592 horsepower and 443 ft.-lbs. of torque. Easily one of the more exotic V-8 sports cars on our Best V-8 Sports Cars list, the McLaren benefits mightily from racing technology developed by the championship-winning McLaren Formula 1 racing team. A seven-speed dual clutch gearbox feeds the MP4-12C’s rear wheels.

The spiritual successors to the gullwinged Mercedes-Benz 300 SL sports cars of the 1950’s, the 2012 Mercedes-Benz SLS AMG sports cars are the current halo models for the brand gliding behind the three-pointed star. New for the 2012 model year for this most distinguished entry on our list of the Best V-8 Sports Cars for 2012 is the SLS AMG Roadster, joining its flamboyant gullwing-doored sibling. Power for both models comes from a 6.3-liter V-8 engine delivering 563 horsepower and 479 ft.-lbs. of torque. This prodigious output is routed to the rear wheels by way of a seven-speed AMG Speedshift dual clutch transmission (DCT) rear-mounted automatic sports transaxle with AMG Drive unit and an E-Select lever.

Status symbol’s status symbols, the Mercedes-Benz SL 550 and its ultra high performance counterpart the Mercedes-Benz SL63 AMG are highly emblematic of what’s known as “the good life”. Fabulous by every measure of the word, a Mercedes-Benz SL speaks volumes about the nature of its owner. Readily qualifying for our list of the Best V-8 Sports Cars, the pair of SLs relying upon V-8 power for their motivation is distinctively styled, beautifully equipped and remarkably fast. The 2012 SL 550 uses a naturally aspirated 5.5-liter V-8 rated at 382 horsepower and 391 ft.-lbs. of torque. Meanwhile, the incendiary SL63 AMG runs a hand-built 6.2-liter V-8—one bellowing forth 465 horsepower and 518 ft-lbs. of torque. BTW, brand new SL models have been introduced for MY2013.

The poor SLK has been unfairly maligned since birth. Marginalized as the Mercedes-Benz “secretary’s” sports car, the SLK has had a “girly” rep since the first model hit the streets in 2000.  The current model however is a dead ringer (albeit in a smaller package) for its bigger SL sibling.  However, while the SL comes with a V8 as its entry-level engine, the SLK must make do with a V6…unless, you check the box marked SLK55 AMG. Then you’ll get an SLK rocking a rollicking 415-horsepower, 5.5-liter handbuilt V-8 pumping out 398 ft.-lbs. of torque. A seven-speed automatic routes the power to the rear wheels. If any SLK is going to break the mold the car’s been cast into, this entry on our list of best V-8 sports cars is the certainly going to be the one to do it. 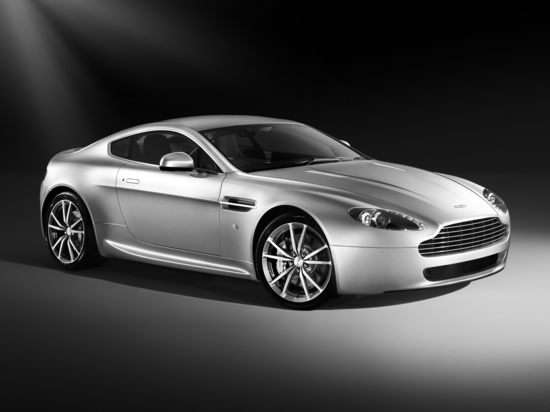