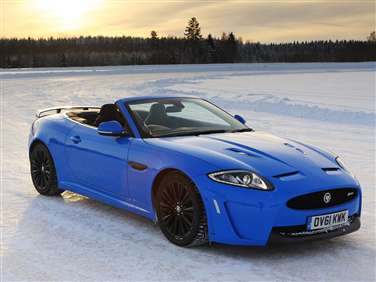 All About Jaguar XK

The Jaguar XK is a two-door, 2+2 full-size luxury coupe, and a two-door, four passenger full-size luxury convertible. The 2008 Jaguar XK8 is a thoroughly modern vehicle which uses the best automotive technologies to renew its position at the forefront of Grand Tourers. In terms of outward appearance, the XK maintains the same general proportions as the previous car but adopts an open-mouthed styling that borrows significantly from Aston Martin. The svelte curves of the outgoing XK are augmented by horizontal bars and swooping angles, leaving only the roofline as a strong tie to the departed coupe. The convertible abandons even this final link.

Underneath the hood, both the coupe and the drop-top can host either one of two V8 engines. A 4.2 liter is standard equipment for either XK8, and it produces 300 horsepower and 310 lb-ft of torque. An even more powerful supercharged version of the engine can be had in the XKR, where 420 horsepower are complemented by 413 lb-ft of torque to produce a driving experience that can best be described as ‘bullet-like’. Both cars come equipped with a 6-speed automatic transmission that can be manually controlled with paddle shifters mounted on the steering wheel – a first for Jaguar.

The XK benefits from an aluminum construction that saves considerable weight, especially in comparison to other cars in the same class such as the BMW 6-Series. The lighter XK is well matched to the 300 horsepower base engine, whose twin-clutch transmission is quite skilled at determining what type of shifting is required for current driving conditions. The XK8 is good for a 0 to 60 miles per hour run of 5.9 seconds, while the XKR betters this number by a full second. Both cars are electronically limited to 155 miles per hour, quite a respectable speed – especially with the top down.

The Jaguar XK is filled to the brim with luxury options, and the list of standard features is as long as the gracefully sloping hood. While it may not look much bigger than the previous edition, the new XK has several extra inches of passenger room thanks to a longer chassis. The space is welcome, as are the re-designed shifter and seats themselves, although rear passengers are still better off taking the bus as it’s definitely cramped back there.

The Jaguar XK is first and foremost a classy cruiser with a beautiful outward appearance and a welcoming interior. It’s hard not to smile the entire time you put the car through its paces, making this high-horsepower, tight-handling two-door one of the best personal luxury vehicles available.

The 2009 Jaguar XK is a carryover from 2008. The 2009 XK can be ordered as either a coupe or a convertible in three different trim levels. The base model uses a 4.2 liter V8 engine that also produces 310 lb-ft of torque. Matched with a 6-speed automatic transmission, this motor sees fuel economy numbers of 16 miles per gallon in the city and 25 miles per gallon on the highway. The performance oriented XKR and XKR Portfolio trims up the ante by featuring a supercharged edition of the same motor that is good for 420 horsepower and 413 lb-ft pf torque. The transmission remains the same, and fuel economy down slightly to 15 miles per gallon in city driving and 23 miles per gallon during highway cruising.

While Jaguar may have been hesitant to update its XJ sedan, it never displayed the same reluctance to modernize its two-door coupe and convertible. The XK debuted in 1996 as a badly needed replacement for the XJS, which had developed a reputation as being unreliable. The new XK was emblematic of the new leadership at the helm of the company, and it became the first Jaguar ever to have a V8 engine installed. After 10 years of service, the XK was re-engineered in 2007 in order to better compete with the new breed of European sport coupes that were appearing on the market.