Named for the mythological Greek goddess of the dawn, the Volkswagen Eos is a four-seat two-door, folding hardtop convertible with a glass sunroof. Built on a shortened version of the front-wheel drive platform underpinning Volkswagen’s Passat, but sized to replace Volkswagen’s Golf Cabriolet, the Eos is perhaps best thought of as a short wheelbase Passat convertible.

And, in fact, the Eos is also equipped more like a Passat than a Golf.

In typical Volkswagen fashion, Eos features high-quality interior componentry, an outstanding feature set, peppy engines, and a distinctive style. Yet, while even the base models are packed to the gills with outstanding comfort and convenience features, the retractable hardtop is what really sets the Eos apart.

Volkswagen refers to the EOS as a CSC (coupe-sunroof-convertible). The model’s five-panel roof assembly stows completely into the trunk in about 25 seconds, making it easy to go from closed coupe to open convertible at a traffic signal. The articulated hardtop employs a heated glass rear window and a transparent sunroof. This enables the Volkswagen’s occupants to retract the roof and enjoy completely open-air cruising when the weather is conducive to doing so. A driver can open just the sunroof for partial open-air cruising when it is not. Even with the roof deployed and the sunroof closed, the people in an Eos still enjoy a light and airy cabin—thanks to the transparent sunroof panel.

Introduced in 2006 as a 2007 model, to date there has been but one generation of the Volkswagen Eos offered.

First shown in production form at the Frankfurt auto show in November of 2005, the Volkswagen EOS was a welcome replacement for the aging Volkswagen Golf Cabriolet. However, rather than standing pat in the Golf Cabriolet’s market segment, VW’s product planners made a conscious decision to move its open car farther upmarket.

More of a premium product than a true luxury offering, the Eos nicely bridged the gap between the two market segments, while offering a remarkably refined automobile for the price. Two engines were offered at launch, a 200-horsepower 2.0-liter turbocharged four-cylinder, which made 207 foot-pounds of torque and a 250-horsepower 3.2-liter narrow angle V6, a configuration Volkswagen terms “VR6”.

Buyers had a choice between a six-speed manual transmission, and a six-speed version of Volkswagen’s direct shift gearbox transmission (DSG). The DSG permitted manual shifts when desired, but would operate automatically when left alone. Steering wheel-mounted paddles enabled the driver to execute shifts on demand.

The 2007 Volkswagen Eos was offered in three states of trim; “Base”, “2.0T”, and “3.2L”. The base model was equipped with a 2.0-liter turbocharged engine, and a six- speed manual transmission. It used 16-inch alloy wheels, variable intermittent wipers, the power retractable hardtop, a rear window defogger, and the power glass sunroof, which could be opened remotely using the keyless entry fob.

Both the driver and front passenger seats featured manual adjustable lumbar support and both were also height adjustable. The base Eos used leatherette upholstery, which is Volkswagen-speak for really nice vinyl. The rear seats folded and offered a pass-through center armrest into the trunk. There were the ventilation ducts in the rear seats as well.

Outside air was filtered before it was allowed to enter the car through the air-conditioning system. There was a beverage cooler, a trunk light, front reading lights, front and rear floor mats, dual illuminating vanity mirrors, and the exterior side mirror housings contained turn signal repeaters.

Opting for the 2.0T got all of the above equipment; plus heat for the driver and passenger seats, power operation for the driver seat, and a power actuated easy entry feature for the rear seat. The 2.0T also featured dual zone climate control, leather trim on the steering wheel and shift knob, and the option of the six-speed DSG automated manual transmission.

The 2007 VW Eos 3.2L rolled on a set of 17-inch alloy wheels, and employed variable intermittent rain sensing windshield wipers, along with eight-way power seats for both the driver and front passenger with power adjustable lumbar support. The 2007 Volkswagen Eos 3.2L was also fitted with leather upholstery, a universal remote transmitter, a tilt and telescoping steering wheel, wood trim on the dash, doors and center console, and an electrochromatic inside rearview mirror.

For 2008, Volkswagen instituted a new series of trim levels for the Eos; designated Turbo, Komfort, Lux, and VR6.

To the above, Eos Komfort added a power adjustable driver’s seat, heaters for both seats, a dual-zone automatic climate control system, a trip computer, and supplemental cabin lighting.

Eos VR6 was similar, but also had the 3.2-liter VR6 engine, a set of 18-inch alloy wheels, a pair of power-folding side mirrors, aluminum cabin trim accents and more supportive sport seats.

Options varied depending upon the trim level; these included a navigation system, a 10-speaker Dynaudio premium sound system, a dedicated iPod integration kit and adaptive bi-xenon headlights that swiveled in concert with the turns of the steering wheel.

The 3.2-liter VR6 engine was discontinued for MY’09, leaving the 2.0T engine as the sole Eos powerplant. This, of course also necessitated dropping the VR6 trim line. At the other end of the Eos spectrum, the Turbo trim line was dropped as well.

The two remaining trim levels, Komfort and Lux were equipped as follows:

The 2009 Komfort model came standard with 16-inch wheels, a tilt and telescoping steering wheel, a 12-way adjustable power driver seat, heated front seats for both the driver and passenger, a dual-zone automatic climate control system, cruise control, a rear center pass-through slot into the trunk, and an eight-speaker stereo system with a six-disc CD changer, in addition to in auxiliary audio input jack for portable devices, and satellite radio.

Both trim levels could be ordered with the Technology Package, which added adaptive bi-xenon headlights and an audible park assist system.

Bluetooth data streaming was introduced, the Lux version of Eos got chrome exterior accents and an optional set of 18-inch wheels to go with its sport suspension system. Touchscreen interfaces were made standard equipment, as were a leather wrapped multifunction steering wheel. The instrument cluster was trimmed in leather as well. iPod connectivity was separated out from the premium stereo system to be a standalone option.

For 2011, the Eos trim lines were configured as follows:

The Komfort model came with 17-inch alloy wheels, and a hill-holder feature was added for the manual-transmission model. Other standard equipment included a tilt-and-telescoping leather-trimmed steering wheel with audio and cruise control switches, a trip computer, a power adjustable driver’s seat, a pair of heated front seats, a dual-zone automatic climate control system, cruise control, a rear center pass-through slot in the backseat to the trunk, Bluetooth data streaming, and an eight-speaker touchscreen stereo system with a six-disc CD changer, an auxiliary audio input jack for portable audio devices, and satellite radio.

To all of the above, the Lux model added daytime running lights, a pair of power-folding heated outside mirrors, smart rain-sensing intermittent windshield wipers, electrochromic auto-dimming inside rearview and driver's side exterior mirrors, and genuine burled walnut wood trim for the doors, dash, and center console. There was also leather upholstery, a power adjustable passenger seat to match the driver’s—complete with power lumbar adjustments and an easy-entry function for the rear passengers.

For model year 2012, Volkswagen's product planners added a trim level called “Executive” at the top of the Eos range.

The top of the line Executive trim adds a sport-tuned suspension system, a set of 18-inch wheels, along with a 10-speaker Dynaudio sound system that restores HD radio.

While there are a number of hardtop convertibles on the market, the Volkswagen Eos is the only model to feature an integrated sunroof. Interestingly, as attractive a package as the Eos is, its sales figures are relatively low. You don't see an Eos on the road every day. Granted this is partially because it's more expensive than most of its direct competitors, but it is better equipped too.

There are few other aspects of the Volkswagen that limit its appeal though—one being the very small backseat. Also, those looking for a great deal on a pre-owned Autobahn burning, corner crushing, fire breathing German sports coupe will look elsewhere after test-driving an Eos.

Ultimately, this VW is all about the smooth cool cruising side of motoring. Yes, its engines provide more than adequate acceleration; however the Eos suspension systems (even when equipped with sport packages) are calibrated more for comfort than cornering.

Perhaps this is why more female buyers gravitate to Eos than male. Of course, it could also be because the Volkswagen is very reliable, exhibits high quality, and is comprised of proven componentry. That said, recalls have been few, though some have been issued. An Internet search for "Volkswagen Eos recalls" would be a good place to start your shopping exercise.

Similarly, a vehicle history report run against the VIN of a particular example you're attracted to is a good idea. This will help you to ensure a clean title and will often give you an idea of the car’s service history as well.

Finally, before committing to any purchase, always make sure the car you intend to buy spends some quality time undergoing a pre-purchase inspection by a trusted professional independent mechanic—one well acquainted with the model of your intent. 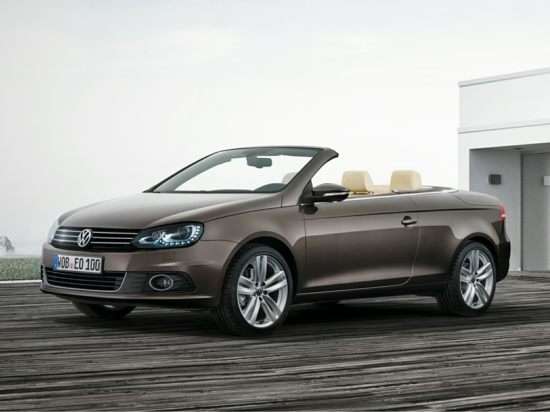