Last year, Volkswagen gave its entry-luxury 4-door coupe, the unimaginatively named CC, a makeover. This year, the 2014 Volkswagen CC gets new features and trim levels in order to improve the car’s value equation and to simplify the lineup.

There are two different types of CC available for 2014. The 2.0T models have a turbocharged 4-cylinder engine and are available in Sport, R-Line, and Executive trim levels. The V6 models are equipped with – you guessed it – a V-6 engine, and come only with Volkswagen’s 4Motion all-wheel-drive system and Executive trim.

For 2014, Volkswagen has added its new Car-Net infotainment and smartphone integration technology to all models, and starting with models built on or after January 15, 2014, the automaker wisely added a reversing camera as standard equipment for the Sport and R-Line models. The CC Sport 2.0T model adds LED running lights, an Adaptive Front Lighting System, and a navigation system as standard equipment, and a new Executive 2.0T trim level replaces last year’s Lux 2.0T.

Though I reviewed the CC last year, the changes meant it was time to take another look at the top-of-the-line Volkswagen model, so I arranged to spend a week with a 2014 CC R-Line 2.0T, the sporty version of this sleek sedan. Not surprisingly, the car’s irritants remain, and while I genuinely like the CC, the sport-tuned R-Line model gave me one new reason to complain.

Now that a reversing camera is standard for all CC models, the base price has risen to $33,360 for a 2014 Volkswagen CC Sport 2.0T, including the $865 destination charge. That price reflects the car’s standard manual gearbox, though. If you want the optional Direct Shift Gearbox (DSG), a clutch-less automated manual transmission that works similar to an automatic, the price jumps to $34,460.

That ain’t chump change, especially for a car that sits on a platform that dates back nearly a decade. Based on sticker price, you can get an Audi A4 2.0T, a BMW 320i, a Cadillac ATS 2.5, an Infiniti Q40, or a Mercedes-Benz CLA250 Sport for less.

My test car is the CC R-Line 2.0T with the optional DSG ($1,100), wearing a window sticker of $35,695. The R-Line model is equipped with a sport suspension, 18-inch split-spoke aluminum wheels, and styling details that separate it from the Sport trim level. Aside from a handful of dealer-installed accessories, it comes one way with no options.

Last year’s styling updates remain appealing, and if you don’t think the wheels make the car, check out the Volkswagen website and look at the alloys offered for the CC Sport 2.0T and CC V6 Executive 4Motion models. Personally, I think the two different 18-inch split-spoke aluminum wheel designs that are standard for the R-Line 2.0T and Executive 2.0T models make this car look terrific.

One thing to note is that the CC features frameless door glass that automatically lowers an inch or two and then raises to properly seal for driving – what my wife calls “Foop!” windows. Unfortunately, this approach always messes up the bottom of the glass right after a car wash.

The CC’s dashboard design dates to the mid-2000s, but still looks good today. Tasteful surface patterns, high-contrast metallic trim, consistent texture and gloss levels, fabric-wrapped roof pillars that match the headliner, perforated leatherette upholstery with unique patterning, and simple but upscale switchgear all make the CC’s interior look upscale and inviting. That’s why the amount of creaking and buzzing that the cabin emanates once the car is underway is so disappointing.

Once you duck, tuck, and roll yourself into the 2014 VW CC, it proves to be quite comfortable. Front seat occupants enjoy 12-way power adjustable seats that supply outstanding support, an adjustable center armrest, and plushly padded upper door panels. Rear seat passengers get more legroom and foot room than might be expected, and the rear seat supplies decent thigh support despite the fact that it is mounted fairly low in the car. My bet is that four people could ride all day without feeling fatigued.

Because the CC is an exercise in style over practicality, getting into and out of the car is somewhat difficult due to its low, arching roofline. I also found it hard to install a forward-facing child safety seat in the rear seat, finding it difficult to properly tighten the top and bottom LATCH straps.

The CC’s 13.2 cu.-ft. trunk is also on the small side, but the space is usefully shaped and Volkswagen includes a large center pass-through and a 60/40-split folding rear seat design. To open the trunk, just push on the top of the rear VW badge, or use the key fob, and the lid springs right up. Closing is easy thanks to the expertly integrated interior handle.

Rectangular in shape and featuring enclosed lid hinges, the CC’s trunk is deep and roomy. Volkswagen even finds room to provide a full-size spare wheel and tire, an increasing rarity and a major selling point if you want that sort of thing.

Earlier in this review, I mentioned that the CC’s interior creaks and buzzes, and the reason is because there’s lots of plastic trim inside this car. Most of it looks good, but it sure cheapens what it supposed to compete with entry-level luxury models that cost about the same amount of money.

On a positive note, all of the controls are located right where you would expect to find them, and most are clearly labeled for ease of use. It is easy to acclimate to the CC’s layout and features, though pairing a smartphone to the Car-Net system’s Bluetooth requires manual inputs on both the driver’s phone and using the CC’s steering wheel controls, and requires referencing two different display screen inside of the car. Seems to me that it ought to be a simpler process.

I also had trouble programming a destination in the standard navigation system. It prompted me to input the house number, then the street, then the city, and as a result I could not find my destination in the car’s database. The default should be city, street, house number. Using that process, I had no trouble. Once underway, it quickly became evident that the navigation system’s screen needs to be larger. After shutting off the automatic map zoom function, I spent lots of time manually zooming between primary street detail and a broader view of traffic conditions ahead.

As luck would have it, my test car was built prior to January 15, when Volkswagen added a reversing camera as standard equipment for all CC models. Also as luck would have it, I found myself backing into a parking space in a parking garage just as I did last year. This time around, though, I managed to avoid rubbing the rear bumper on the concrete garage wall, despite the lack of this extraordinarily useful feature.

Now, if we could just get them to add a blind-spot monitoring system and a rear cross-traffic alert system, the CC’s lousy outward visibility would be much less of an issue.

As this review was written, the NHTSA had not performed crash tests on the 2014 CC. The Insurance Institute for Highway Safety (IIHS) had, though, giving the car the best possible rating in all assessments except the small-overlap frontal-impact test, in which the CC earns a “Marginal” rating.

A year after conducting an extensive test of the CC 2.0T, my opinions remain mostly the same. This car has a terrific turbocharged 4-cylinder engine paired with an automated manual transmission that rarely performs exactly as the driver might expect, combined with outstanding steering, tires that squeal earlier than they ought to, and brakes that don’t feel or perform quite as good as they should.

The differences this time around were the R-Line’s transmission paddle shifters and stiffer suspension tuning. I found the former useful for managing the DSG, making the car more satisfying to drive, and the latter a discombobulated mess.

Let’s start with those paddle shifters, which go a long way toward resolving the DSG’s frequently frustrating shift characteristics. Supplementing the Sport driving mode and manual shift gate, the R-Line’s paddle shifters allow the driver to keep both hands on the steering wheel and click his or her way up and down the turbocharged 2.0-liter 4-cylinder engine’s rev range, making maximum use of the motor’s unexpectedly satisfying 200 horsepower and 207 lb.-ft. of torque. When downshifting, a rev-matching feature also gives the CC R-Line a more aggressive edge, one entirely appropriate for a German sport sedan.

The R-Line model’s tweaked suspension, however, seems to serve no other purpose than to amplify sharper impacts while at the same time allowing the car to bob and weave unexpectedly over dips and heaves in the pavement, making the car feel unyieldingly stiff one minute and then woozy the next, producing a regularly disoriented ride on all but the smoothest of roads. Add the propensity of the P235/40R18 Continental ContiProContact tires to squeal at the slightest hint of sidewall load, and I’m inclined to classify the CC R-Line as a smooth highway cruiser rather than back road bruiser.

As far as fuel economy is concerned, I averaged 24.1 mpg, coming in a little below the EPA’s official 25-mpg estimate for combined driving.

Trapped within the increasingly blurred boundary lines between what constitutes a mainstream car and a luxury sport sedan, the 2014 Volkswagen CC is stylish, comfortable, and fuel-efficient. I also find it to be entertainingly athletic, once you’ve acclimated to its dynamic quirks. This is a car that grows on you over time, making it easier to forgive its flaws.

Unfortunately, the aging CC competes against numerous vehicles that offer a better value equation, or greater prestige, or fewer shortcomings in terms of design, materials, engineering, and driving character. There’s plenty to like about this good-looking car, but there’s also plenty to dislike. Ultimately, the CC sells on style, and to die-hard Volkswagen fans who value VW allegiance above everything else.

Volkswagen provided the 2014 CC R-Line for this review 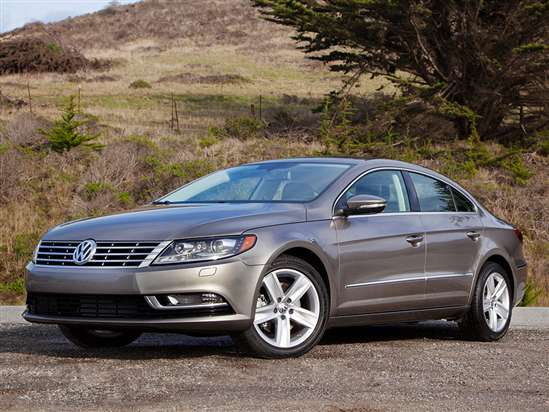