2012 Toyota Prius Plug-in Review: What Is It
By Christian Wardlaw

Toyota would certainly disagree, but the 2012 Prius Plug-in strikes me as a compromise, a “me-too” kind of response to the flurry of plug-in hybrid and pure electric vehicles that are just now starting to arrive in showrooms, with Chevrolet and Nissan leading the charge (no pun intended).

To create the Prius Plug-in, Toyota stripped the standard Prius of its increasingly archaic nickel-metal hydride battery pack, replacing it with a larger and more powerful lithium-ion battery that can be plugged in to recharge, and which can supply pure electric propulsion for limited distance and limited speed.

“What’s the big deal,” you rightly ask. “The standard Prius can go as fast as 25 mph on its batteries.” Yes, that’s correct, but only for a short distance. Contrast the standard Prius model’s electric range and speed with that of the Prius Plug-in, which Toyota claims will travel up to 15 miles at speeds up to 62 mph using nothing but the juice stored in its new lithium-ion battery pack, and its clear that the new Plug-in model is an improvement even if it’s not quite competitive.

Toyota sells the Prius Plug-in as a standard model, or as a more expensive Advanced model. The standard model starts at $32,980, but Uncle Sam provides a $2,500 federal tax credit, effectively lowering the price to $30,260.

The Advanced model costs $7,525 more. In exchange for this additional outlay, the Advanced model is equipped with Dynamic Radar Cruise Control with a Pre-Collision System, three years of free Safety Connect services, a hard-drive navigation system, a JBL premium sound system, a heads-up display, LED headlights, and SofTex upholstery, which looks and feels like leather but isn’t.

Our test car was the basic model, with no options, and we didn’t miss any of the extras that come on the Advanced version.

2012 Toyota Prius Plug-in Review: What It’s Up Against

2012 Toyota Prius Plug-in Review: What It’s Up Against

The Chevy Volt and Nissan LEAF arrived in 2011, reviving interest in electric cars. The Volt is similar to the Prius Plug-in, but not quite the same. The Leaf is altogether different, a pure electric vehicle that dies just like your iPhone when the last watt is consumed. After tax credits, the Nissan Leaf costs thousands less than the Prius Plug-in, while the Chevrolet Volt costs thousands more.

The Nissan Leaf is less expensive, and never burns a drop of gasoline. It can easily cover twice the distance of the average American commute on a single charge, plus run errands, and the battery can be replenished overnight using a household outlet.

The Chevy Volt is more expensive, but unlike the Leaf, never runs out of electricity because it has a gasoline engine aboard to serve as a mobile generator. After recharging for the night, the Volt can go nearly 40 miles without using a drop of gas. But when the battery juice runs low, the gas engine fires to extend range until the next recharge. As a result, you can get in a Volt right now and you can set off across the country, never once plugging in, yet the gasoline engine directly powers the drive wheels only on rare occasions, such as when climbing a steep grade.

The Prius Plug-in sits in between these models. It can travel as far as 15 miles on battery power, according to Toyota, before the gas engine kicks in. However, top speed in EV mode is 62 mph, and in our experience that 15-mile range is optimistic. Once the gas engine grumbles to life, the Prius Plug-in operates just like a regular Prius, except it costs thousands of dollars more.

It’s no accident that the Toyota Prius looks like a teardrop on wheels. Designers sought to wrap the most aerodynamic design possible around the car’s unique powertrain components while providing a roomy and useful interior. Form, then, follows function, and the result is an impressive 0.25 coefficient of drag.

A decade ago, the Prius would have been radical. Today, consumers are used to seeing the Prius roam the highways and byways of America, and modern mainstream vehicles are adopting similar design cues as every automaker seeks to maximize fuel economy and minimize wind resistance.

How It Looks and Feels

If you’ve been telling yourself that a Prius simply won’t work because you need room for kids, for clients, for pets, or for whatever, perhaps you ought to visit a Toyota dealer and investigate one for yourself. The EPA rates this car as a midsize vehicle, it’s got 21.6 cu-ft. of cargo space, and there’s easily room aboard for four large adults or a family of four. The “it’s too small” excuse ain’t gonna cut it.

In addition to being roomy, the Prius is genuinely comfortable. The height-adjustable driver’s seat offers a perfect position facing the futuristic dashboard, the fabric upholstery is soft and plush, and there are comfortable places to rest your arms. The steering wheel is a bit small and slightly ovoid in shape, but pleasing to hold. We were also impressed with how quiet the Prius Plug-in is, even when whizzing down the freeway at 80 mph. The cabin is far more tranquil and isolated than a Camry’s, certainly due, in part, to the impressively low coefficient of drag.

The quality of the interior materials is good, but not great. There’s plenty of hard plastic inside this car, grained with a pleasing pattern. Thankfully, the dashboard produces minimal reflections in the windshield.

As is expected in a technologically advanced automobile, the displays and controls are futuristic and unconventional. From the odd gear selector and the “Park” button to the Touch Tracer Display sensors on the steering wheel and the slit of information showcased across the top center of the dashboard, there’s nothing normal about the Prius Plug-in’s control panel.

Our test vehicle was equipped with the new Entune color touchscreen radio and smartphone pairing system with mobile application support. The screen suffers from small buttons and glare on sunny days. However, Entune offers applications that allow owners to remotely control charging, air conditioning, and other features by using applications downloaded to their phone.

How Does It Go

Toyota pairs an Atkinson-cycle 1.8-liter 4-cylinder gasoline engine with an electric motor and a rechargeable lithium-ion battery pack that swaps in for the standard Prius model’s nickel-metal hydride battery and gives the Plug-in model its extended EV range. Combined, the system develops 134 horsepower.

Our test car, which had fewer than 500 miles on the odometer when we took possession from Toyota, held a 10.1-mile range when the battery was fully charged. It took me just a few hours to fully charge the Prius Plug-in using a standard household outlet, but given the limited range the battery pack provides, enough to get from my house to the mall and back, this speedy charging time is no grand achievement.

The 24-foot charging cord is also a bit frustrating. Coiled like a garden hose and sitting in the trunk, it doesn’t come with a caddy around which it can be wrapped to prevent tangling and to make it easier to store and retrieve. As a result, we clunked it on the bumper, clunked it on the ground, and got it tangled on a couple of occasions. Note to Toyota: see Chevy Volt and Nissan Leaf.

The Prius Plug-in’s powertrain features three driving modes: EV, Eco, and Sport. You can use EV mode as long as you have some battery charge remaining and the driving doesn’t involve hilly terrain or speeds above 62 mph. Use a light foot on the throttle, stay below 62 mph, and you’ll whir along without burning a drop of gas.

Eco mode is what most drivers will prefer when EV mode is unavailable, as it is programmed to maximize fuel economy at the expense of lively acceleration. In Eco mode, the throttle is calibrated to deliver a leisurely pace and indifferent response, even if you mash the accelerator to the floor. Most of the time, this isn’t an issue, and since Prius Plug-in buyers are likely of a mind to eke every last mile out of every last gallon of gas, they’ll adore Eco mode’s electronic go-pedal nanny.

If you don’t want to get left in the dust in the stoplight drag race, well, maybe you shouldn’t have purchased a Prius Plug-in. But if you did, know that Sport mode actually gives the car some guts. Switch to Sport mode after hyper-miling in EV and Eco modes for a while, and it feels like someone surreptitiously installed a turbocharger on the Prius. In fact, you can even spin the inside front wheel while powering out of a turn. But don’t tell the EPA or the California Clean Air Resources Board I said that.

Once you get the hang of how the Prius Plug-in works, you’ll be busy stabbing at the EV, Eco and Sport buttons on the center console in an effort to best employ the powertrain for the task at hand. Around town, EV mode is best, at least during the short period of time during which the battery contains a charge. However, if you need to power up a hill, or pass traffic, the gasoline engine will fire and kick in to assist the batteries as necessary.

Because of the limited EV range, and because EV mode is speed limited, and because the gasoline engine is so frequently required for extra oomph, the Prius Plug-in isn’t nearly as entertaining or satisfying to drive as a Chevrolet Volt or a Nissan Leaf. Of course, the Leaf eventually runs out of charge, leaving the driver stranded unless he or she finds a place to plug it in. But the Volt doesn’t.

That said, the Volt isn’t as fuel-efficient when its gasoline engine fires to serve as a generator. The EPA says the Volt, which requires premium fuel, will get 37 mpg. The Prius Plug-in achieves a combined rating of 50 mpg, on less expensive regular fuel, to boot. The Prius also beats the Volt by a single mile per gallon when factoring travel on the battery and then exhausting the gasoline in the fuel tank, at 95 MPGe vs. 94 MPGe (miles per gallon equivalent).

Still, I prefer driving the Volt, which strikes me as more technologically sophisticated and as less of a compromise. The Chevy is dynamically engaging, and while I drove this Prius Plug-in at a much greater rate of speed on a twisty mountain road than I ever would have guessed might be possible (there’s plenty of battery weight snugged down low in the car, which makes it more adept in curves than anyone would believe), the Volt’s pure electric propulsion and 273 lb-ft. of instantaneous torque are addictive, whereas the Prius Plug-in’s 153 lb-ft. of electric motor torque and limited EV operating speed are merely interesting.

During a week of driving the Prius Plug-in – admittedly, mostly on the highway – we averaged 51 mpg, which is about 10 mpg better than we’ve seen from a standard Prius. The Prius Plug-in commands a $5,500 premium over a base Prius, after applying the tax credit. Apply some math, and if you drive 12,000 miles per year and gas costs $3.50 per gallon, the Prius Plug-in saves you $200.86 every year. That means it will pay for itself in, oh, 27.4 years. And that doesn’t factor in the cost of the electricity to charge the car.

Obviously, then, the reason to buy a Prius Plug-in is to obtain Clean Air Vehicle stickers in California, which allow this version of the Prius to use the carpool lanes with just the driver aboard. We also used the car’s electric vehicle status to park in the special charging station slots inside of a busy Santa Monica parking garage on a busy summer weekend.

Zooming past clogged traffic lanes and enjoying reserved parking, especially in L.A., make the Prius Plug-in worth it. Your results are likely to vary.

Toyota provided the 2012 Toyota Prius Plug-in for this review 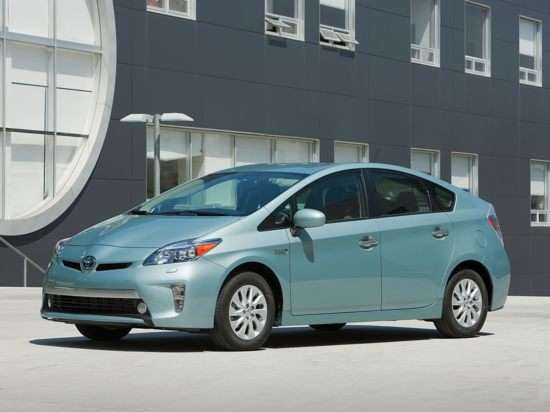