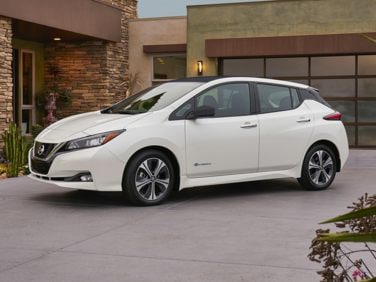 All About Nissan LEAF

The Nissan LEAF certainly has a cute, friendly name for an environmentally friendly car, but according to the brand, "LEAF" is actually an acronym for "Leading, Environmentally friendly, Affordable, Family car." It is known for being one of the first all electric vehicles oriented toward budget minded consumers. Nissan designed the LEAF to make it mostly conventional looking, hoping to attract mainstream buyers in addition to eco-conscious consumers. It was released in the United States and Japan at the end of 2010, and its global rollout was gradual through 2011 and 2012. It is built at Nissan plants in Japan, England, and the United States, and is available throughout North America, Japan, Europe and Australia.

The LEAF is a five-door hatchback that, upon its North American release, was marketed to compete with compact and subcompact hybrids and other energy efficient cars, since it was a pioneer in the full electric vehicle segment. (Though there are a couple of others, such as the Mitsubishi i-MiEV, the LEAF was the first to offer the full functionality of a regular car since it is large enough to carry multiple passengers and is capable of achieving and maintaining highway speeds.) The LEAF actually shares a lot of components with other subcompact Nissan cars, most notably the Versa, so its size and capacity were already well understood. Body components were changed to make them more aerodynamic, most notably, a smooth underbody pan. The headlights also feature LED lights that use less energy than the more common halogen units.

The Environmental Protection Agency rates the LEAF's fuel economy at the equivalent of 115 miles of gasoline, and it can travel 75 miles on a full charge (which is less than Nissan's claim of 100 miles). The LEAF can be recharged at home or at public EV charging stations. The fully electric motor means it produces no harmful emissions during its usage. The motor is 80 kW (the equivalent of 110 horsepower) and it is paired with a 24 kWh lithium ion battery pack. The motor is front mounted and the battery pack is located under the seats. As mentioned, this combination enables the LEAF to handle real world driving conditions. It has a top speed of 93 mph, and can reportedly achieve a 0-60 time of 9.9 seconds. The 2013 LEAF underwent several minor changes to improve battery efficiency problems reported with the 2011 and 2012 models. The LEAF was designed with features intended to make it competitive with the high end compact car segment, including lightweight alloy wheels, a comfortable cabin, and high end stereo and navigation options.