The subject of this 2015 Toyota Prius c Road Test Review is part of a family, which includes the standard Prius Hatchback, the Plug-in version of the Prius Hatchback, and the station wagon-like Prius V. Among them, the Prius c is the most affordable member of the family.

Based largely on Toyota’s Yaris, the Prius c is also considerably smaller than the other Prius-badged Toyotas. The “c” suffix stands for city, which is exactly where this little runabout shines. By their very nature, hybrids get better fuel economy in city driving, so as a city car, the Prius c starts off with a significant advantage.

With a base price of $20,760, the Prius c is offered in four states of trim — literally One, Two, Three, and Four; making the 2015 Toyota Prius c as easy to order as it is efficient with fuel.

Toyota intends the levels to be self contained, so very few options are offered. However, the sunroof and alloy wheels can be added to the Three, and you can get 16-inch alloy wheels for the Four.

For the 2015 model year, the Toyota Prius c got refreshed front and rear styling. Elements include new headlights, the now signature Toyota big-mouth grille, and new taillights. Still, though, one of the Prius c’s prime assets is the fact that it is instantly recognizable as a Prius. After all, for the vast majority of the motoring public, that shape epitomizes hybrids.

That said, one of the smartest things Toyota did with the Prius c was give it a familial resemblance to the other Prius models. Its tidy size in comparison to the others also gives it more of a youthful exuberance, and indeed younger people are attracted to the c more than the other Prius autos. That shape is also responsible for the excellent .28 coefficient of drag the Prius c achieves.

The look of the interior is cutting edge techno-chic. Like its Prius siblings, the instrument panel resides atop the dash, and is situated more toward the center of the car than the driver. It seems a bit weird when you first see it, but in use it proves to be an effective arrangement.

Seating is comfortable overall, though the steering wheel could telescope out a bit farther to accommodate the legs of taller drivers. When we adjusted the driver’s seat so our legs could find happy (plenty of room for that by the way), we had to reach in a bit to grasp the wheel. When seated in the rear, legroom was fine, as long as the taller among us seated in the front were willing to share. Headroom was more than adequate too.

The stubby styling of the Toyota city car might lead you to believe cargo-carrying capability is at a premium. However, the Prius c’s folding rear seat gives the littlest Prius some 17 cubic feet of cargo capacity. The seat folds as one piece in the c One; all of the other trims offer a split fold.

For us though, where the Prius c really surprises and delights is in its standard feature set.

As we mentioned in the Models and Prices section, the Prius c’s standard equipment list includes such notables as automatic climate control and a tilt/telescoping steering wheel with audio, climate, Multi-Information Display, and Bluetooth hands-free controls. Every Prius c also features remote keyless entry. If you want to get a little more spendy, you can also opt for the optional Display Audio system with its satellite navigation function and Toyota’s Entune system.

Functioning through your smart phone, but wholly integrated into the car, Entune brings applications such as Open Table, Bing, and Pandora to the Prius c’s standard display screen. Entune also pipes real time information such as traffic, weather, fuel prices, sports, and stock prices into the c.

If this diminutive Toyota hybrid is starting to look like a lot more than just an economy car to you, you’re very astute.

In crash testing, the Insurance Institute for Highway Safety awarded the Prius c the highest possible rating of "Good" in the frontal-offset, side-impact, rear crash, and roof strength tests. However, in the very tough to pass small overlap frontal offset test, the Prius c scored “Poor,” which is...quite the opposite of "Good."

It doesn’t sound like a lot, until you realize the Prius c weighs only 2,500 pounds.

A continuously variable transmission routes the engine’s power to the front wheels.

The EPA rates the 2013 Toyota Prius c’s fuel consumption at one gallon of regular unleaded gasoline for every 53 miles traveled in the city, 46 on the highway, and 50 combined. With its 9.5-gallon fuel tank, the Prius c has a theoretical range of 503.5 miles on the highway.

Driving the Prius c around town is really no different than driving its larger Prius siblings for the most part. While the c gives up some 35 horsepower in comparison, it also enjoys a minimum of a 542-pound weight advantage over its porkier stablemates. Thus, performance between all Prius models is about on par. Keep in mind though, we’re talking about a Prius here, so the word “performance” is a relative term.

The fact of the matter is that none of the Prius models are terribly exciting to drive; however of them all, the Prius c is the one that could be considered the closest to being kind of fun. Still though, you won’t set your eyebrows on fire launching a Prius c from a traffic signal.

But really, in the final analysis, that isn't what this car is all about.

With that in mind, it’s fair to say its acceleration, braking, and cornering are more than adequate for its overall mission in life; transporting people and their goods — while consuming as little fuel as possible in the process.

Taken in that light, the Toyota Prius c is a rather brilliant little car.

In other words, with the Prius c, Toyota gets back to the basics of what its best-selling hybrid model is all about — small, efficient, comfortable, well equipped transportation, at a very good price.

Admittedly though, to get there, some of the refinement of the larger Prius models was sacrificed. The interior is a bit low-rent compared to other Prius models. It also rides more harshly and is noisier. But hey, the other side of that equation is fifty-freaking-three miles per gallon in the city! 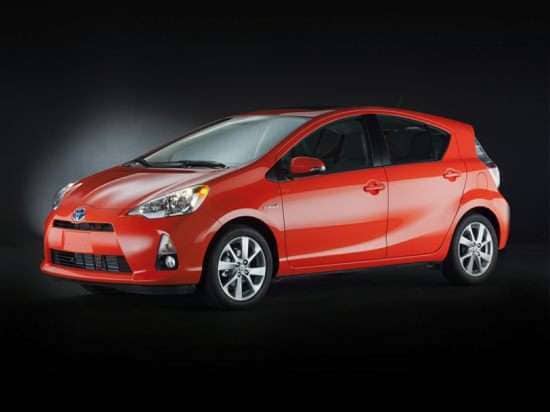