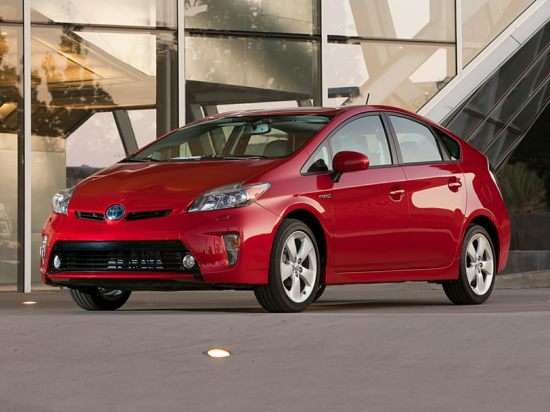 Changes for the 2015 Toyota Prius:

For 2015, the Persona Series special edition model returns, painted red or white with a unique wheel finish, and based on the popular Prius Three trim level.

The Prius is offered in numerical trim levels called Two, Three, Four, and Five, and a special-edition Persona Series model is offered as a version of the Prius Three. The Prius Plug-In model is available in standard and Advanced levels of trim.

In the standard Prius, a 1.8-liter 4-cylinder gasoline engine is paired with an electric motor, a nickel-metal hydride battery pack, a continuously variable transmission, and a regenerative braking system to generate a combined total of 134 horsepower. The drivetrain offers a choice between Normal, Eco, Power, and EV driving modes, the latter allowing the Prius to travel about one mile on electricity alone, as long as speeds remain below 25 mph. The regenerative braking system recharges the car’s battery pack.

Get a Prius Plug-In, and Toyota swaps in a more powerful 4.4 kWh lithium-ion battery that gives the car an EV range of about 11 miles at speeds up to 62 mph. When EV range is depleted, the Prius Plug-In works just like a standard Prius model. To recharge the battery, the owner plugs the car in to a household electrical outlet and waits about three hours. For faster recharging, a 240-volt outlet cuts that time in half.

In combined driving, the standard Prius is rated to get 50 mpg, according to the EPA. The Prius Plug-In matches that after the battery reaches its minimum state of charge. When used first as an electric vehicle and then as a hybrid vehicle, the Prius Plug-In achieves a 95 MPGe rating.

According to the NHTSA, the 2015 Prius earns an overall crash-test rating of 4 stars. The Insurance Institute for Highway Safety (IIHS) assigns the popular hybrid a more favorable rating, giving the Prius a “Top Safety Pick” designation.

Aside from the Prius model’s hybrid drivetrain technologies, Toyota supplies several technologies for its most fuel-efficient vehicle. All but the Prius Two are equipped with a standard navigation system and Entune App Suite technology, the latter pairing with a smartphone for dashboard access to the Bing search engine, Facebook, Internet radio, your music library, and various data services.

Additionally, the Prius is offered with a solar-powered sunroof panel that circulates cabin air to keep the interior cooler while the car is parked. Get a Prius Plug-In and you’ll be able to remotely activate the climate control system via your smartphone in order to heat or cool the cabin before driving. Toyota also offers a radar cruise control system, a pre-collision system, a Lane Keep Assist system, and LED headlights for the top-of-the-line versions of the Prius.