Once upon a time you couldn’t buy a compact cargo van in the United States, but in just a few short years the small hauler segment has burst at the seams with options available from Ford, Nissan, and (by-way-of-rebadging) Chevrolet.  The latest utility player to enter this fray is the 2015 RAM ProMaster City, the junior sibling-in-name to 2014’s Ram Promaster and the latest evidence of corporate synergy between Chrysler and Italian parent Fiat.

As with the full-size Promaster that came before it, the 2015 Ram Promaster City is based on a Fiat platform.  This time, however, Ram had some input into the van’s design process thanks to a fortuitous scheduled refresh of the Fiat Doblo with which it shares its bones.  This made it easier to graft on the thicker, more rugged suspension components called for by North America’s copious use of road salt and the resultant potholes and corrosion risk.  It also gave Chrysler stylists the opportunity to provide input into the shape of the Promaster City’s front fascia and lighting, as opposed to the piecemeal approach taken with the bigger Promaster - a benefit that is immediately obvious to anyone who has ever seen the somewhat-hastily-dressed full-size van in person.

About that Americanized chassis: the Ram Promaster City offers the only modern independent rear suspension in its class, and hustling a fully-loaded version of the panel edition around an obstacle course comprised of props from the cinematic works of Robert Rodriguez (whose Troublemaker Studios Ram had borrowed for the day) proved it to be more stable than one might otherwise expect.  On the hosed-down section intended to test the limits of the Promaster City’s brakes and steering capabilities the van proved compliant, if not eager, and its stability control system was surprisingly amenable to handbrake turns through some of the slicker hairpins.

Built In America, Then In Turkey

Built In America, Then In Turkey

All versions of the 2015 Ram Promaster City are powered by the same 2.4-liter four-cylinder engine, which Chrysler has dubbed the ‘Tigershark.’  Tuned to provide 178 horsepower and 174 lb-ft of torque, the motor is actually built in the U.S. and then shipped to Europe where the entire van is assembled before being transported back to American soil for sale.

A nine-speed automatic transmission is matched with the four-cylinder mill in a bid to provide the versatile low-range gearing required for making the most of the Promaster City’s 5,395 gross vehicle weight rating without sacrificing fuel efficiency.  I’m happy to report that the nine-speed behaves much better in the Ram than it does in the four-cylinder edition of the Chrysler 200 sedan, displaying none of the abruptness or rough shifting that I encountered when testing that particular vehicle.  I was even satisfied with the transmission's performance while towing a load of 1,500 lbs, and reported fuel mileage is good, too: you get 21-mpg in city driving and 29-mpg on the highway with the Promaster City.

There’s no denying the utility of the 2015 Ram Promaster City.  All vans sit on a wheelbase of 122.4 inches – roughly the equivalent of Ford’s long-wheelbase Transit Connect compact van – and when ordered in panel trim, the Promaster can accommodate 131.7 cubic feet of cargo.  The cube’s width measures as 60.4 inches, and it’s just a few inches more than eight feet long.  I was able to stand up in a hunched position inside the van without much issue, and dual sliding doors (with a lock to keep them from sliding closed on a hill) combine with 60/40 rear clamshells that can open up to 180 degrees for easy access to equipment and cargo.

Where the van stretches credulity is when it’s called upon to serve as a people mover, rather than a pack mule.  The Ram Promaster City can be configured with a second row of seating (with four feet between the back bench and the barn doors) to expand its total capacity to five passengers, but there’s truly limited legroom for anyone sitting behind the first two positions.  Throw in the difficult ingress and egress brought upon by the position of the bench itself, as well as the spartan nature of the interior, and I think the Promaster City is going to be a hard sell as a family conveyance.  If retail buyers aren’t turned off by the job-focused spec sheet (which, to be fair, does include touchscreen audio and navigation), then they’ll likely be put off by the van’s acceptable, but far from sprightly acceleration.

To commercial drivers and fleet managers I think the 2015 Ram Promaster City is going to make a lot of sense.  Handling and comfort behind the wheel is equivalent to or at small cut above the similarly-sized Nissan NV200, and the price is right: you can start your Promaster City fleet for as little as $23,130, which is the window sticker for the base Tradesman Cargo Van trim (passenger wagons add a $1,000 surcharge).  Even though that's a few thousand more than the much less powerful, and not as efficient NV 200, it's still quite reasonable for a vehicle as useful as the Ram Promaster City, which looks to have a bright future ahead of it as a go-to urban delivery mule or airport shuttle. 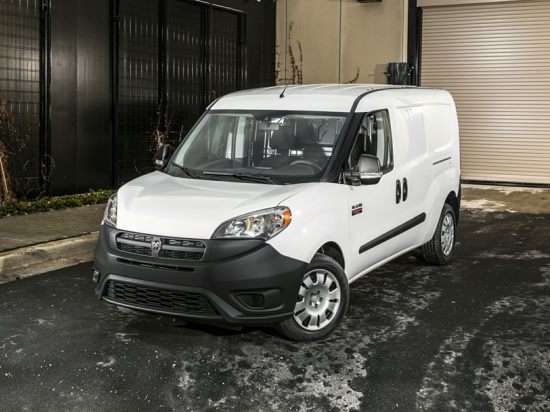